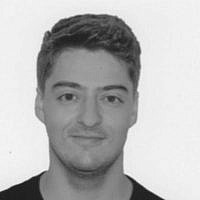 The Blogs
Noam Konyn
Apply for a Blog
Please note that the posts on The Blogs are contributed by third parties. The opinions, facts and any media content in them are presented solely by the authors, and neither The Times of Israel nor its partners assume any responsibility for them. Please contact us in case of abuse. In case of abuse,
Report this post. 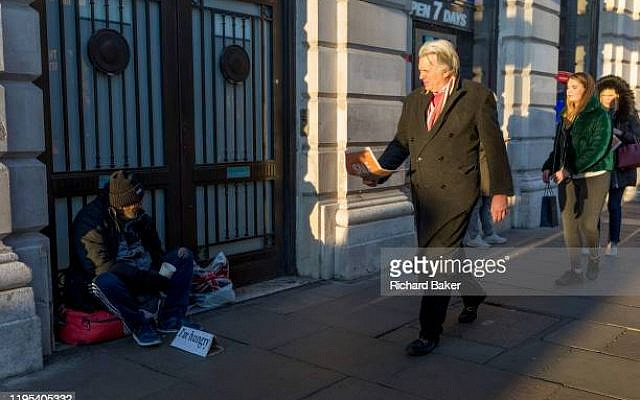 Passers-by ignore a homeless man begging with a sign saying 'I'm hungry', on the pavement in Piccadilly, on 20th January 2020, in London, England. (Photo by Richard Baker / In Pictures via Getty Images)

In the only recorded interview of him, John Von Neumann, esteemed polymath, said of the future that “more scholarships will be very important…before this you will need very good training in secondary schools. Otherwise you may never discover that you have that ability”. Von Neumann was alluding to the notion of equality of opportunity, something he believed required more work than was being done at the time. This was almost 100 years ago, and yet Von Neumann’s words still ring true. The present day world continues to be blighted by inequality – of opportunity, of wealth, of societal treatment. In fact many sources have reported that in recent years inequality has been on the rise. A report by the UN Department of Economic and Social Affairs (DESA) showed that inequality has increased for more than 70% of the global population[1]. In a press release, the World Bank predicted that between 88-115 million additional people would fall into extreme poverty in 2020, with that total number rising to 150 million by 2021[2], as a result of the Coronavirus Pandemic. Such developments have propelled the issue of inequality to the fore of academic debate.

THE ISSUE OF INEQUALITY

​​According to The World Bank, 10% of the global population live on less than $1.90 a day. We can conduct a brief thought experiment to understand the reality of global poverty. In 1820 estimates placed the percentage of the global population at the time living in extreme poverty at about 94%. The global population in 1820 sat at around the 1.1 billion mark. So a simple calculation would tell us that there were about 1 billion people living in extreme poverty. In 2021, 10% of roughly 7.79 billion is about 779 million. So over the past 200 years 255 million less people live in poverty. However, while an attractive statistic at face value, and while 10% sounds far better than 94%, the use of such statistics to support arguments against wealth distribution should be taken with a pinch of salt. Beyond accounting for relative differences attributed to a massive increase in the global population, we can look at Chinese efforts to eradicate extreme poverty. China has lifted 800 million people out of extreme poverty. If we look at the case of China alone, the numbers lifted out of poverty should suggest a much larger reduction in poverty rates globally, and yet this is not the case. China is also not the only nation to have made substantial progress with poverty. So what we can understand from this is that while some are lifted out of poverty, many more are born or fall into it. While making for attractive reading, a reduction in poverty does not suggest that the problem has been solved, but rather tells us that financial systems around the world still exist to compound issues of extreme poverty, generating new conditions for poverty to this day. In the United States, a supposedly highly developed progressive and affluent society, about 11.8% of the population lives under the poverty line [3]. Moreover, there are 18 million people in the US that do not have access to a bank account. This is rather perplexing given how basic a provision it is, and how omnipresent the concept of basic financial services is to many of our daily lives.

This brings me onto my next point, which I believe is truly crucial and often overlooked by most in the debate over inequality – 1.7 billion adults worldwide do not have access to a bank account [4]. How is it possible that 1 in 4.58 people around the world have no access to a bank account? In China 224 million people do have a bank account; in India 191 million; Pakistan 99 million. The issue of wealth inequality cannot be solved universally if such a large number of individuals do not even have access to modern methods of storing value. This is an issue that can certainly be tackled as will be discussed later.

The issue of inequality appears to be compounded in less developed parts of the world. Of the world’s 28 poorest countries, 27 are in Sub-Saharan Africa, all with poverty rates above 30% [5]. South Asia has been especially hit hard by Covid-19, with an estimated 49 million additional people expected to be pushed into extreme poverty. Moreover, failed statehood and political instability has meant that extreme poverty rates nearly doubled in the Middle East and North Africa between 2015 and 2018 – 3.8% to 7.2% [5]. Poor leadership, corrupt regimes and war have all played roles in increasing inequality in these regions of the world. Without overcoming these issues, developing a greater economy and infrastructure allowing for greater inclusion in the financial system gets pushed to the peripheries of policy. Given that by 2030 67% of the global total of those living in extreme poverty will be concentrated in regions considered fragile, evasive action is needed.

THE CASE FOR WEALTH DISTRIBUTION

As established prior, there is a dire need to address global inequality. We can propose several different feasible mechanisms that can alleviate extreme poverty globally. Echoing Von Neumann, increased opportunity sits at the core of any effort to tackle the issue at hand. 70% of those over 15 who live in extreme poverty have no schooling or a limited basic education. By increasing education programs, both state and privately sponsored, we can provide those in need with basic skills in order to enable greater participation in the global economy. In more developed economies that still experience large gaps in equality, providing greater exposure to education via scholarships and targeted programs, while improving the overall quality and availability of public education can be highly effective.

Another way in which we might address the issue of inequality is to provide a universal basic income. Often criticised as unaffordable, or unmeritocratic, UBI is neither. With regard to meritocracy, UBI would target the extremely impoverished. A common misconception is that it would provide unmotivated members of society a reason to not work. Establishing UBI is aimed at alleviating extreme cases of poverty, not providing middle classes a free income. The provision would only be sufficient to buy basic foodstuffs, and cover basic living costs. To demonstrate the intention, we can propose moving those living off $1.90 a day, to $3.80. This in itself can make a significant difference. In America this would be the replacement of $20 a day to $40. Such fees cannot sustain a comfortable standard of life to the unmotivated in society. UBI is also highly feasible and affordable. Respected economist Guy Standing (2021) posed an interesting thought [6]. He notes that reducing government spending on tax relief for wealthy companies and individuals can help fund a UBI scheme. Citing the UK’S post 2008 recovery plan, the £375 billion spent by the Bank of England could have been spent on basic incomes. This would have allowed everyone in England to receive £50 a week for two years. Alternatively, Antoine Sorel Noren, creator of the first initial coin offering (ICO) in cryptocurrency, advocates for a privatised solution. He suggests that the use of blockchain technology can transform how UBI is implemented, making it cost-effective, secure and transparent [7]. The elimination of bureaucracy and reliance on the central state would also ensure 100% of funds reach recipients – current estimates show only 30% of welfare program funds reach recipients (Karma Finance, 2021).

The use of blockchain technology to improve the lives of the extremely impoverished extends to another important point – greater financial inclusion. To enable this two issues must be tackled – the issue of lack of infrastructure, and the issue of inefficient and corrupt financial systems. The development of blockchain technologies has the potential to tackle both issues simultaneously. As mentioned, decentralised finance (DeFi) solutions running on blockchain technology can circumnavigate the failings of central states; particularly effective in cases of corruption and poor leadership. Projects have already begun trying to implement such solutions. An example of this is Cardano. Cardano is a smart contract blockchain platform. Its parent company IOHK recently struck a deal with the Ethiopian government to create a national digital database of student and teacher IDs. This is the first step in providing digital identities to millions of Ethiopians, thereby providing the first steps towards real financial inclusion [8]. A similar project, Fantom, is working on revolutionizing payment systems and kick-start the digital economy in Tajikistan and Uzbekistan [9]. By providing digital and secure infrastructure, blockchain projects can help enable those in the lower echelons of the global financial system to participate. We encourage this bottom-up approach to tackling the issue of inequality. Rather than a top-down approach, as many have suggested, via the increase of wealth tax or via state sponsored solutions, individuals will get their increased chances to build wealth. State imposed solutions as the debate demonstrated are often unpopular in the public realm, and can be perceived as forceful. As such building from the bottom upwards allows for a greater sense of freedom, in the true spirit of free market economics.

[6] Standing, G. (2021, May 26). Support is growing for a universal basic income – and rightly so. Retrieved from https://theconversation.com/support-is-growing-for-a-universal-basic-income-and-rightly-so-161309

[8] Salami, I. (2021, May 20). Ethiopia’s blockchain deal is a watershed moment — for the technology, and for Africa. Retrieved from https://theconversation.com/ethiopias-blockchain-deal-is-a-watershed-moment-for-the-technology-and-for-africa-160719

About the Author
Currently completing a Masters in Diplomacy and Conflict studies at the IDC in Herzliya. Born and raised in Hong Kong, Noam takes a keen interest in global affairs.
Related Topics
Related Posts
Comments