One of the challenges while running a theater is finding engaging thought provoking shows with a message that will challenge an audience to step a bit outside their comfort zones.

Not all theaters set out to do this, not all of them can. But for those who can straddle the cusp of shows that are both edgy, and in good taste, it is my belief that they have a responsibility to do so. To not only engage their audience but to educate them as well.

‘Pizza Man’, now performing at the AACI – J-Town Playhouse is one such show. 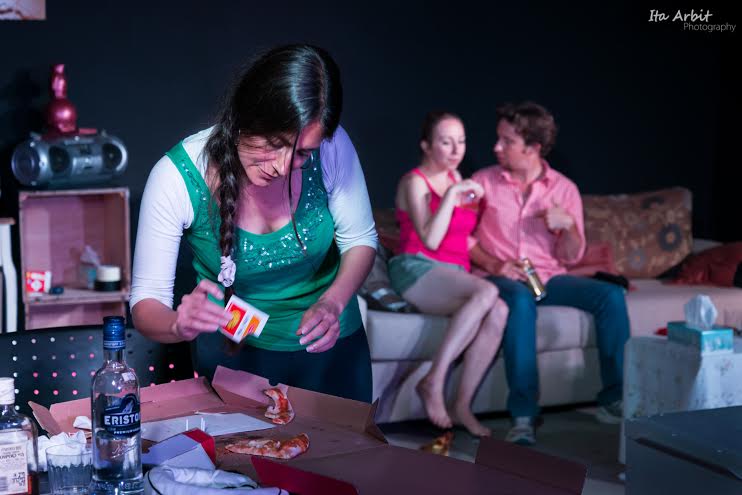 I had the pleasure to see this show for the first time during an off-broadway production at the Mid-Town International Theater Festival in the summer of 2009. After seeing the production, it occurred to me that this show was indeed special. It managed to succeed where many shows strive but fall flat. The show was humorous, educational, and quite racy. It was a show that I never thought I could put on in Jerusalem. And this is after I had directed the first production of Jonathan Larson’s RENT in Israel, which is in of itself a rather edgy show.

But edginess is not what this show is about. This show is about taking control of one’s life. Of getting back to being in control of one’s self. In the words of Eryn London the Assistant Director, “Pizza Man is a story about two women trying to find ways to be in control over their own lives. We find them at the point in which they are figuring out if they will break and go over the edge or if they will find a way to fight back and regain their personal strength.”

The beauty of the show is that it creates an emotional roller coaster for the cast and the audience who gets pulled along with them. Although the show uses extreme examples and characters in order to elucidate its point, it is aptly handled by the Director team of Jeremy Saltan and London, and acted superbly by Layla Schwarz, Eileen Eisenberg, and Pascal Carlier.

From the moment I sat down in my chair, the acting as well as the story line gripped me, as I felt myself relating to each of the kookie characters at different times. The dialogue flows quickly and smoothly, and pulls the audiences into the storyline, which is not something I have always felt in many of the theater performances I have seen.

The play challenges the audience by inviting them to explore alongside the characters, the issues of wanting to be doing something that one loves, finding someone to love and care for and who loves you back, finding self respect, and figuring out how to actually be one’s authentic self in a world filled with  other people’s expectations. How can one be strong and assertive while drowning in the sea of life, and other people’s imposed opinions?

The show brings laughter alongside a healthy dose of introspection, and throughout the laughs the audience is brought almost to tears with the universality of the message, which is repeated numerous times throughout the last scene, In order to find your own self worth, you need to look within, rather than find it by acting out towards others and imposing your own expectations upon them.

With opening night now in the bag, it is safe to say that not only I, but also the other audience members thoroughly enjoyed the performance. Numerous audience members took to social media shortly after the inaugural performance with statements such as : “Just saw an amazing hilarious play called Pizza Man! Go see it – it’s in jeru and Eileen Eisenberg is the best actress ever!!!!!!!”  Other posts included; “I don’t usually like plays but this was so funny! Ull enjoy!” As well as: “Omg!!! Great play everyone…go see it. Really funny!” 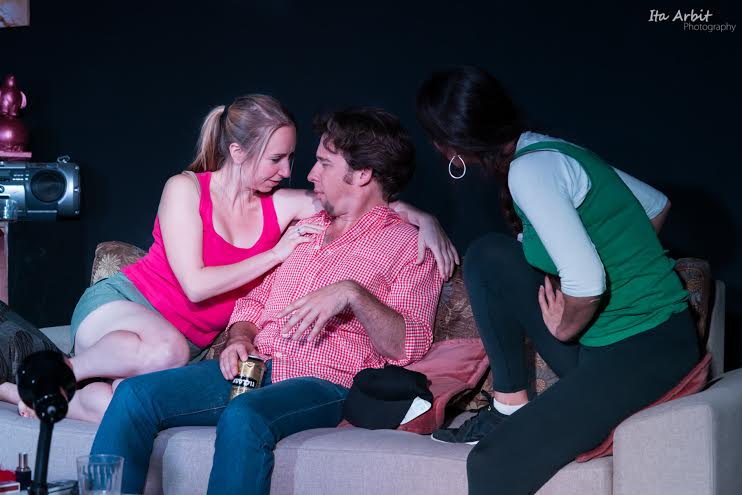 Schwartz, Carlier and Eisenberg turning up the heat in Pizza Man (Photo by: Ita Arbit)

While the younger members of the audience expressed their opinions on social media, the older generation stayed to talk for a long while after the performance with cast and crew members, something which is no small feet, noting that the play, whose run time was just under two hours, ended around 10pm.

To find a show that manages to delve into such a serious side of the human experience as this show does, while staying firmly in the comedy section of the bookshelf, is music to any Artistic Director’s ears. But is the Jerusalem audience ready for a show that deals with such sordid topics as alcoholism, eating disorders, self esteem issues, sexual assault and knowing one’s self all wrapped up in a dark comedy?

It would seem that based upon the reaction from the audience at opening night that the answer would be a resounding yes. But with 6 more performances still to come, only time, and future audiences will tell.

About the Author
Raphael Poch is a Canadian-Israeli playwright, producer, director, actor and journalist. He is the International Media Spokesperson for United Hatzalah and runs the First City Improv Troupe.
Related Topics
Related Posts
Comments