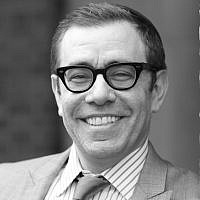 The Blogs
David Hoffman
Apply for a Blog
Advertisement
Please note that the posts on The Blogs are contributed by third parties. The opinions, facts and any media content in them are presented solely by the authors, and neither The Times of Israel nor its partners assume any responsibility for them. Please contact us in case of abuse. In case of abuse,
Report this post.

One of the saddest dynamics gaining attention following the recent Israeli elections is the role that Judaism is playing in alienating Jews from Jewish community.

Of course, these dynamics have been in place for a long time.  But something is different now.  There seems to be greater fear and conviction.  There are voices growing louder who want to push Judaism and Jewish identity off and away.

When Israelis and Americans see that some of the most xenophobic, anti-LGBTQ+, racist, and non-democratic ideas gaining traction in Israel today are voiced by people wearing kippot and framing these world views through a reading of Judaism, these responses of rejection are understandable.

Most recently, Hillel Halkin – a thoughtful Israeli writer, thinker, and longtime Zionist – expressed his frustration and strong indictment in the Jewish Review of Books:

“I put it [the blame] on Judaism, of whose fantasies and delusions Zionism sought to cure us only to become infected with them itself.  Zionism wanted to make us a normal people.  It failed and grew warped in the process. “

Halkin’s conclusion is tragic and flawed, but again somewhat understandable.  However, the danger inherent in his statement must be made explicit.

What Halkin sees being done in the name of Judaism…what other Israelis and Americans see in Israel today…what the world now sees… is not reflective of the history, ethos, or priorities of Judaism.

It is a Judaism that has been taken hostage.

Currently, there is not a free market in Israel for the development of Jewish ideas, practices and diverse Jewish communities.  One coalition representing the views of radical rabbinic leaders controls government finances and has the ability to impose and coerce specific Jewish practice on the entirety of society, including civil matters.

This singular version of Judaism, hardened by the tenacious hold of a religious monopoly, will continue to alienate more and more Jews on both sides of the ocean from Judaism, at a moment in history when we must do everything possible to bring Jews together within an expansive tent of Jewish life.

As the world will increasingly see this misrepresentation of Judaism, the future consequences should not surprise any of us: “If that is what Judaism says about minorities, women, other Jews, and Arabs – then I want no part in Judaism!

But it is not only the state of Jewish engagement that is at stake: the health of Judaism itself is threatened.

If the Judaism that has a home in a small number of social silos in Jerusalem and B’nai Brak is the primary type of Judaism that receives the State’s enormous financial resources, then other reads on Judaism and Jewish community will be severely challenged in their growth.  The State of Israel has only authorized one vision of Judaism.  Closed markets do not produce lively and exciting environments that are engaging and generative.  This is true in business, and it is equally true in culture.

Judaism has always been a multivocal chorus of ideas, with different notes and emphases.  Rabbi Yechiel Michal Epstein (1829-1908) famously liken the project of Torah to a complex harmony of many different voices singing different notes.

Judaism is not a solo.

And a Judaism that contents itself to speak only to its micro-community, insulated from the larger society, will continue to skew farther and farther to the right.

Halkin’s disillusionment with Judaism comes not only from the current political reality, but from a notion of Zionism that has its origins in the nineteenth century and that reigned true for most of the twentieth century.  In this understanding, Judaism and Zionism are largely antagonists.  Zionism seeks to usher in the new Jew, liberated from the backwardness and morally inferior ideas of a Judaism of the past.

But in recent decades, we are seeing Israelis increasingly vote with their feet—and they don’t want a divorce from Judaism.  They don’t want a Zionism where Judaism is excised.

Over the last twenty years or so, there has been a powerful and socially important return to the Jewish bookshelf and Jewish community.  A growing number of Israelis – who place themselves along the full spectrum of Jewish identity– want to seriously explore Jewish sources, spirituality, and literature.  They want to live Israeli lives textured and inflected by Jewish language and values.  And they want to do this in community.  This is the revolution of Israeli Judaism Halpern fails to consider.

The Honey Foundation for Israel financially supports the inspiring Israeli spiritual leaders who are unfolding this revolution.

There are dozens of Israeli spiritual leaders on the ground – in the networks we are nurturing – building Jewish communities that are welcoming, tolerant of diverse ideas, and that teach a Judaism of love.  From Orthodox to Secular, our Honey Fellows are building communities where the Jewish ideas of Tzelem Elohim (human dignity given by God inheres in all human beings) and Ahavat Ha-Ger (love of the stranger) –– are core to their leadership. Importantly, this breadth of Jewish leadership does not simply parallel the American Jewish denominations.  Israeli Judaism unites Judaism and Israeli-ness in a creative fusion of Hebrew, music, literature, traditional learning, and connection to the land.

Day after day, with each Shabbat, wedding and Bar Mitzvah, these spiritual leaders show their fellow Israelis that there are other possibilities for Jewish living and community.  They are fighting the growing perception that the existing political coalition has a monopoly on what Judaism means, and redeeming Judaism and Torah from the misrepresentation of a minority of Jews.

Moreover, these spiritual entrepreneurs are creating a more robust market of Jewish expression whose diversity and richness reflects all of Israeli society.  This is the work needed to prevent Jews from giving up on Judaism.  This is the work that we wish Hillel Halkin would see and amplify.

We must recognize the horrible impact monopolies have on Judaism and Jewish communities and democracy.  Just as a version of Torah has the power to divide and incite, authentic Torah has the power to create a more connected and compassionate world.  Supporting spiritual leaders in the Israeli Judaism movement will create a different Israeli society – one that is more democratic and reflective of true Jewish values.

Judaism will always be a political factor in the State of Israel.  The only question is: which Judaism?

Judaism and the Jewish people are counting on all of us…

About the Author
Rabbi David Hoffman is President of the Honey Foundation for Israel. The Honey Foundation for Israel invests in the growing field of Israeli communal rabbinic and spiritual leadership, around the entire country and across the broad spectrum of religious expression, providing financial and professional resources that allow these talented leaders to build robust and engaged communities.
Related Topics
Related Posts
David Hoffman