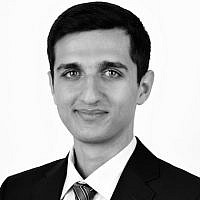 The Blogs
Fuad Shahbazov
Apply for a Blog
Advertisement
Please note that the posts on The Blogs are contributed by third parties. The opinions, facts and any media content in them are presented solely by the authors, and neither The Times of Israel nor its partners assume any responsibility for them. Please contact us in case of abuse. In case of abuse,
Report this post.

On 4th of July in 2017, a new violence has erupted in the line of contact (LoC) of Azerbaijani – Armenian troops in Nagorno-Karabakh region. Reportedly, as a result of heavy artillery shell in Fizuli direction, namely Alkhanli village, two civilians including 2 years old girl Zahra Guliyeva and her grandmother had been killed. The two died when a shell hit a house in the village of Alkhanli on Tuesday eveningş According to local media, Armenian forces in Nagorno-Karabakh used 82 and 120 mm mortar rounds and 73 mm grenade launchers. 2 years old Zahra Guliyeva was not the first child-victim of the conflict in Nagorno-Karabakh. In 2011, 9 years old Fariz Badalov was killed by Armenian sniper. Another, Aygun Shahmaliyeva was killed by Armenian-made baby doll in Tovuz district in 2016.

In the light of these events, Azerbaijan accuses Armenia of targeting civilians. “The death of innocent civilians in Alkhanli village is a real damage to peace process” said Dan Stav, an Israeli ambassador to Azerbaijan. Such an unexpected development in the frontline, and military operations against Azerbaijani civilians in the LoC, repeatedly raised concerns about possible skirmishes between Azerbaijani – Armenian forces.

Following the human casualties, the OSCE issued an official statement expressing their deep concern regarding ceasefire violation. ““We consider this serious incident as a provocative action that undermines peace efforts and could provoke a breakdown in the forthcoming negotiations.” underlines the statement.

The Nagorno-Karabakh region, which is internationally recognized part of Azerbaijan, has been occupied by Armenia in 1994. That war in the early 1990s claimed some 30,000 lives, and the two sides have never signed a firm peace deal. In 1992 and 1993, the U.N. Security Council adopted four resolutions on the Nagorno–Karabakh war. Each resolution confirmed the territorial integrity of Azerbaijan to include Nagorno–Karabakh and the seven surrounding districts and called for the withdrawal of all occupying Armenian forces from Azerbaijani territory. These resolutions were never implemented by Armenia. The warring parties signed a cease-fire agreement in 1994.

Throughout turbulent years, official Baku has largely attempted to promote peaceful settlement of the conflict relying on international organizations such as OSCE Minsk Group, the EU, the UN, as well as, global powers like Russia, France, and the U.S. Nevertheless, no tangible result has been achieved yet. However, Since August 2014, violence has increased noticeably along the Line of Contact between Armenian and Azerbaijani forces. Moreover, in the wake of the April 2016 escalation, which claimed at least 200 lives and swept both societies in a frenzy of pro-war sentiment. Since that period of time, OSCE Minsk Group’s attempts to reach a consensus between two parties through organizing joint meetings did not justify hopes. In this regard, official Baku did not hide its disappointment over what it considers to be double standards.

Undoubtedly, Azerbaijan – frustrated with the longstanding status quo and concerned that additional security measures could further cement it – insists substantive discussions cannot be delayed. As experience shows the ineffectiveness of long-term peace negotiations, while number of civilian deaths in the frontline is growing day-by-day. The recent brutal attack against civilians in Alkhanli village sparked an outrage in several countries as well, enforcing them to acclaim solidarity with Azerbaijan’s justified position.

The Kremlin-linked Russian expert Sergey Markov stressed out that the international community must exert pressure on Armenia in order to stop the killing of people in the Nagorno-Karabakh conflict zone. Seemingly, Armenia, which satisfied with the current status-quo, actively hinders the reaching compromise over Nagorno-Karabakh region.

While violence in Nagorno-Karabakh remains at a relatively low boil, any escalation quickly could spin out of control, and the danger of more deadly fighting involving highly destructive weaponry is real. However, both Azerbaijan and Armenia are still far from reaching substantive result over the Nagorno-Karabakh settlement.