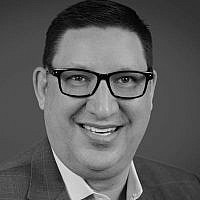 The Blogs
Michael Oberlander
Apply for a Blog
Advertisement
Please note that the posts on The Blogs are contributed by third parties. The opinions, facts and any media content in them are presented solely by the authors, and neither The Times of Israel nor its partners assume any responsibility for them. Please contact us in case of abuse. In case of abuse,
Report this post.

At this time of year in Israel, it would be very hard to not know that Purim is coming this week.  There are ads all over for costumes, alcoholic beverages, parties and other gatherings.  There are lights, colors and a palpable festival atmosphere (including a giant blow-up “monster”, I think it is, on top of the President’s house).  And, at the same time, I keep wondering if Purim is an Israeli holiday.  It might be because I made aliyah in August 2019, so I have not yet celebrated a “normal” Purim as an Israeli.  Our kids are well on their way to adulthood so I am not seeing it through the eyes of young children.

Moreso, the Purim story seems to provide lessons for Jews living in the diaspora, not in Israel.  Unlike much of the rest of Tanakh that describes the Jewish people’s life in, journey to, or longing for the land of Israel, Esther tells a story about the Jewish people living in a non-Jewish kingdom, surrounded by non-Jews, living far from Israel.  The story is one that will come to be told many more times: Jews live as a minority outside the land of Israel, with different beliefs, customs, names, from the majority and then Jews achieve a certain level of status, and then become the target of those in power.  One way to read the Book of Esther is as a lesson for Jews living in diasporic communities, navigating the politics of living as the “other” in a society not quite their own.¹

Jews living in Israel are confronted with the question of what it means to live in a Jewish state; a state in which Jewish values and ideals (and indeed laws) inform our building a just society.  When Jews are sovereign in the State of Israel we can act with the support of the organs of government, through the laws that are adopted, the taxes that are assessed and the expenditures that are made.  In this shemittah year, we are reminded that it is only in Israel that the Jewish people can fulfill all that God has commanded.

Jews living in the diaspora are faced with different challenges.  As Professor Yoram Hazony put it in God and Politics in Esther (2016, p. 3), “[t]he book of Esther deals first and foremost with the problem of Jewish politics in exile: how the Jews, deprived of every sovereign institution of power, may nevertheless participate in, and in the last resort make use of, the authority of an alien government to ensure their own vital interests, and in this case their lives.”

The Book of Esther tells us that when Esther was taken to the King, Mordechai instructed her to hide her Jewishness.  Throughout the millennia, many in the diaspora have also felt the need to hide or downplay their Jewishness (their otherness) when living in non-Jewish countries.  The very name of the book, Esther, attests to the hiddenness of the Jews living in Persia at that time.  Rather than use her Jewish name of Hadassah, Esther is referred to by her Persian name.  (Similarly, both Joseph and Moses in Egypt use non-Jewish names as they exerted influence and power in the courts of the Pharaohs.)  It is unclear whether at that time it was known that Mordechai was Jewish, but we are told that Mordechai acted within the halls of power (the King’s gate).  He is so close to the King’s advisers that he learns of a plot against the King and tells Esther to warn the King of the threat against him. The King has no reason to know that it was Jew who saved his life, nor that his wife was Jewish.

Jews living in the diaspora can learn from the Book of Esther that there is no benefit to hiding their Jewishness.  It will not protect Jews from being targeted for being different, nor will it obscure the fact that our values are often antithetical to the whims of the powerful.

Years pass, Haman is promoted and Mordechai refuses to bow to Haman.  No one can understand why Mordechai refused to bow.  The King’s courtiers inquired, and Mordechai simply explained that he was a Jew.  Commentators have offered many different ideas to explain Mordechai’s (in)action and his “explanation.”  Some mistakenly say that Mordechai refused to bow to Haman because Jews do not bow to humans.²  Our sages came up with the idea that Haman wore an idol around his neck and that Mordechai refused to bow to the idol (see Esther Raba 6:2). We have the tradition that Haman was the descendant of Agag, the Amalekite king that Saul did not put to death as instructed by God through the prophet Samuel.  Or, at least the author of the Book of Esther tells us that Haman is an Agagite (a Persian name) to allude to the connection between Haman and the Amalekites.   And of course a Jew should never bow to Amalek.  What we do know is that by refusing to bow to Haman, Mordechai  was knowingly violating the law of Persia at the time.  Any of these explanations are hinted at by the text rather than explicitly stated.  As Professor Jonathan Grossman wrote in Esther: The Outer Narrative and the Hidden Reading (2011, p. 89), “[t]he text provides only one clue to the reason for Mordechai’s refusal”, it is simply because Mordechai is a Jew.

What we do know is that Achashverosh elevated Haman above all of the other officials. In a way, Achashverosh was saying to his subjects that he was like the King in Heaven, above the worldly matters, and Haman would have unfettered power over the mortal realm.  Mordechai could have been objecting to the idea that Haman would use that power to do evil.  Or, perhaps power itself would become something to worship, idolatry itself.  As we know, and as recent events remind us, when power is concentrated in the few, that power will soon be used against the weak.  Perhaps what Mordechai could not countenance was the idea that the exercise of human power is above what God commands, to work to build a just society.

When Haman learns that Mordechai was a Jew he decided to order the genocide of the Jewish people.  Haman did not decree the death of an entire people because one man refused to give him honor; he decreed the death of a people whose values impel them to resist his evil ways.  When Mordechai refused to bow to Haman he was not doing so simply as an individual; he was doing so as a Jew.  Haman made this clear in how he sold his evil plan to the King.  Haman described the Jewish people as a people dispersed and scattered (in exile), with different laws.  But, of course, all subjects of the realm are subject to the King’s laws, so Haman can only mean that the Jewish people are subject to a law other than the King’s.  He then goes further to say that the Jews will not obey the King’s laws, and drives home the point that the King can not tolerate the Jews very existence.  Haman understood that Mordechai’s refusal to bow was merely an indication of the Jews willingness to oppose evil in our midst; the idea to destroy Amalek wherever Amalek may be found.  Our enemies often understand the Jewish people’s role in the world better than even we do:  the Jews’ role is to resist the idolatry of evil whenever and wherever we can.  (I would be remiss to ignore the fact that it is a Jewish President of Ukraine who is standing up to the abuser of power in Russia.)

Mordechai and Esther were only effective political actors when their Jewishness was evident.  And, Jews must advocate for Jewish values, as Jews.  We should not be ashamed to fight to protect the rights of others by loudly and proudly proclaiming that each and every one of us was created B’tzelem Elokim.  We fight for justice because God commanded us to pursue justice, not simply because it is the type of society that we want to inhabit.  We work for peace because our prophets tell us that nation shall not lift sword against nation.  Esther tells this story in exile, and not in Israel, because it is only in exile that Jews will be forced to confront evil without the benefit of being sovereign in our own land.  Those of us living in Israel would do well to remind ourselves, at least each Purim, of the unique challenges faced by Jews in the diaspora.

¹But make no mistake, Purim and the Book of Esther are quintessentially Jewish.  The Book of Esther is one of the most beloved of the books of the Tanakh.  Our sages in the Talmud (Berakhot 57b) tell us that various books of the prophets are associated with wisdom (such as Kohelet and Mishlei), others with punishment (Iyov and Yirmiyahu), some with piety (Shir HaShirim and Tehilim), greatness (Melachim) or consolation (Yeshayahu), but only Esther is identified with miracles.  The Book of Esther is considered to be “so Jewish” that the Christian Church long considered the Book of Esther to be “unacceptable”; Martin Luther said “I am so hostile to this book [2 Maccabees] and Esther that I could wish they did not exist at all, for they judaize too greatly and have much pagan impropriety.”  See Frederic W. Bush, “The Book of Esther: Opus Non Gratum in the Christian Canon,” Bulletin for Biblical Research 8 (1998), pp. 39-54.

About the Author
Michael Oberlander made aliyah in 2019 from St. Louis, MO, where he lived for over 25 years and was a volunteer and then professional leader in the Jewish community. He lives in Ra'anana with his wife and 2 dogs, as the kids are busy getting married, studying or serving in the army. He is the General Counsel of Freightos, the global freight booking platform, with offices in Jerusalem, Ramallah, Barcelona, the US, India and China.
Related Topics
Related Posts
Comments