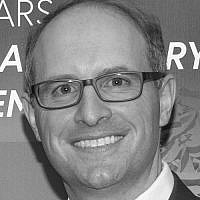 The Blogs
Daniel Klein
Apply for a Blog
Please note that the posts on The Blogs are contributed by third parties. The opinions, facts and any media content in them are presented solely by the authors, and neither The Times of Israel nor its partners assume any responsibility for them. Please contact us in case of abuse. In case of abuse,
Report this post.

I read San Francisco State University’s President Mahoney’s justification for allowing a convicted terrorist to speak under the banner of SF State and felt my jaw drop and head shake while reading her words. In case you missed it, SFSU President Lynn Mahoney published an Op-Ed in the JWeekly explaining her rationale for allowing two SFSU faculty members to invite Leila Khaled, a convicted terrorist and an armed two-time plane hijacker, to be a featured speaker at an upcoming SFSU class Zoom meeting. President Mahoney said she stands behind her decision to allow a convicted terrorist to speak because doing so promotes critical thought and diversity of opinion. Let’s take her up on her suggestion to critically look at SFSU’s actions.

Mahoney, in her Op-Ed, basically says there are good people and good ideologies on both sides, when she references a convicted terrorist. I wonder: How many convicted terrorists from other political and social ideologies does SFSU invite to speak to students as part of its classes? What would President Mahoney’s reaction be if her faculty invited Omar Mateen to speak? Yes, the same Omar that killed 49 people at the Pulse nightclub in Orlando, FL. I can hear it now, “Well, this is not the same thing”. And why not? Both Leila Khaled and Omar Mateen are convicted criminals, and some might even call Omar Mateen a terrorist. Like Khaled, Mateen’s crime was politically motivated: He felt the American LGBTQ community deserved to pay for the injustices of U.S. involvement in the Middle East. Should we invite him because, as President Mahoney puts it, “protecting viewpoint diversity enables our important mission of delivering higher education.”?

Okay, if Mateen is too radical, how about SF State invite Dylann Roof? Yes, the same Dylann Roof that massacred nine African Americans in South Carolina during Bible study.  Why did this self-professed white supremacist and domestic terrorist do it? Because the worshipers had the “audacity” to be black and pray at a church with standing in the community. In the name of “academic freedom,” should we invite Roof to campus so he can share his viewpoints with students as part of a class Zoom meeting?

Using President Mahoney’s reasoning these terrorists and others should be allowed to share their hate for the LGBTQ and African American communities during class zoom meetings, if the professors determine that hearing from convicted terrorists expands student dialogue and thought. Anyone who balks at the thought of these individuals speaking at a university class is stifling free speech and academic freedom — Don’t worry, President Mahoney has your back.

Yet, because the victims of the invited terrorist are in the Jewish community, for some reason it is perfectly acceptable for SFSU to invite a terrorist who had two unpinned grenades (that thank God did not explode) on her during her last attempt to hijack a commercial flight to speak to the university community. Somehow, Jewish students “should” feel comfortable and safe with this content as part of their studies; just as students in the BIPOC or LGBTQ community “should” feel comfortable and safe with having one of the aforementioned criminals speak in a zoom meeting facilitated by the university. If only for this reason President Mahoney were to wake up, it would have been sufficient.

Adding fuel to the fire, San Francisco State just settled a lawsuit alleging they discriminate against Jewish students, don’t provide a safe environment for Jewish students to learn, don’t provide a safe space to talk about Israel, did not protect Jewish and pro-Israel student’s right to assemble, and have allowed Jewish students and pro-Israel students to be excluded from university events. Part of the aforementioned lawsuit settlement was for SFSU to do a better job listening to Jewish students’ concerns and helping to provide a safe space. Yet, when the overwhelming Jewish community and the SF State Jewish community specifically tells SFSU that having a convicted terrorist who has not denounced her former attempts to kill Jews speak under the banner of SFSU, why is it so hard for the university to hear their legitimate concerns? Is it that hard to see the unsafe environment this puts students, faculty, and the community in? Does SFSU know better than the overwhelming Jewish community what is safe for them? In the current environment, where as a society we are doubling down on our efforts to make civic spaces safe, I just cannot believe Mahoney is choosing to ignore the Jewish community, especially as antisemitic acts are on pace for record highs. If only for this reason President Mahoney were to wake up, it would have been sufficient.

Lastly, President Mahoney is acting as though her hands are tied. Her argument: Since SF State is not sponsoring this event, it absolves her of any action. I disagree. Since this event is happening on a Zoom meeting facilitated by SFSU faculty, it is the equivalent of hosting a terrorist on SFSU’s campus. Because this meeting is sponsored by Professors and departments using their titles, and the Zoom license is probably funded by SFSU, this is a university sanctioned event.

I am not alone in these thoughts. I am no lawyer, so I decided to do a quick search on the Federal Judiciary website on free speech to see what I could learn in the name of critical thinking and academic discourse. I found a few legal precedents I thought might be instructive for President Mahoney. In the name of academic freedom, here is what I learned:

Free speech is not protected when it incites actions that would harm others — Schenck v. United States, 249 U.S. 47 (1919). Kahled’s platform of “Death to Israel and Jews” might fall within this one.

Free speech is not protected when one makes or distributes obscene materials — Roth v. United States, 354 U.S. 476 (1957). Having pictures of a woman holding a gun she hoped to use to kill Jews, might be considered obscene. While President Mahoney twists as much as she can to try to say this is not a sponsored event or that she approves of the content that is facilitated by her faculty and students, it seems based on precedent, she may be misguided. Per Bethel School District #43 v. Fraser, 478 U.S. 675 (1986), it is not “free speech” when students make an obscene speech at a school-sponsored event. If only for this reason President Mahoney were to wake up, it would have been sufficient.

University is supposed to be the place where ideas are shared and collaboration is learned. University is supposed to be a place where facts and enlightenment win the day and solutions to hate and destruction are found. Unfortunately, SF State history shows that those ideals might be true, but not if you are Jewish and/or pro-Israel. Even after lawsuits and demands for change, Jews just do not seem to be welcome, heard, or even respected at SFSU. I don’t know how President Mahoney had the audacity to write and print what she did, but it is why my jaw dropped and my head shook reading her letter. What time do we live in when the President of a public state university can champion the inclusion of an anti-minority terrorist as a featured speaker as part of its studies? I agree Free Speech is a sacred American right; however, I may be more cognizant of the current antisemitic context and history than President Maloney is. There have been multiple shootings at synagogues in the United States (including in California) and numerous anti-Semitic tropes here in the press. For these reasons as well, I am especially dumbfounded by Mahoney’s tone deaf and ignorant response.

Clearly, the university will not listen to Jewish community or Jews on campus, so I hope people of consciousness see this and decide to act as allies in this struggle.

About the Author
I am the grandson of Holocaust survivors where the need for a strong Israel and necessity for involvement in the political process was discussed at the dinning room table. As a father and husband, I am moving that conversation to the public domain and continuing my grandparents survival story
Related Topics
Related Posts
Comments