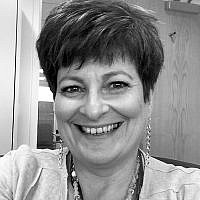 The Blogs
Liz Lightstone
Apply for a Blog
Advertisement
Please note that the posts on The Blogs are contributed by third parties. The opinions, facts and any media content in them are presented solely by the authors, and neither The Times of Israel nor its partners assume any responsibility for them. Please contact us in case of abuse. In case of abuse,
Report this post.

So last night I tried to post this on fb as a comment on outrageous reporting by the BBC.  But – bizarrely each time I wrote my comments and then tried to share, it disappeared – I started to wonder if someone was editing centrally?   And during the time of writing and my previous post on fb 1.5 hours earlier, there had been 26 – TWENTY SIX – more Red Alerts (download the app if you want to get some idea how often the sirens are going off and where)  – 26 more rocket attacks on Israel, 26 more sirens (actually more because the alerts cover several towns at once), 26 more moments of absolute terror – will they hit a child, will I get to the shelter in time, will it hit a hospital?  Raining down indiscriminately on a completely terrorised population –the Israeli population (20% Arab remember so not just raining down on Jews, but on Arabs, on Christians, on Israelis).  This is the terror the Israeli army is responding to when it fires on Gaza.   And yet the BBC headlines that “Hamas vows revenge for Israeli attack” (

.  Does the BBC not see cause and effect?  Does it not even begin to empathise with the Israelis literally living under a rain of terror?  Clearly not.  I would use a completely different argument when reporting the Israeli response in Gaza – it is measured, it is extraordinary only 5-6 people have been killed and that’s because, unlike the rockets landing in Israel, it’s targeted at the rocket propellers, at those initiating the terror even though the Hamas cowards often use launchers sited near schools and hospitals.

One can only imagine the BBC (and the UN, Obama, ISIS, Iran, Guardian readers) would be happier if more Israelis were killed. Sorry to disappoint but Israel tries to protect its citizens (all its citizens, not just Jews) – with shelters, with Iron Dome, with siren warnings; they don’t use them as human shields.  Of course an Arab life is worth as much as an Israeli life but one side chooses to protect its citizens, the other side puts them in harm’s way.  In the past few weeks, the only nationalistic gatherings in Israel have been to pray and then mourn for the 3 kidnapped and murdered Jewish boys – there have been no celebrations about Arab and Muslim deaths.  There is national shame over the terrible terrible murder of Mohammed Abdul Khadeir – it is a stain on Israel but it’s not being celebrated. It has been condemned by the Prime Minister, the perpetrators have been caught and will be brought to justice.  There have been no mass postings of children and adults making the sign of one to celebrate Mohammed’s kidnap and murder.  Compare with the vast number of postings (including by Mohammed himself, no excuse for his murder but symptomatic of the collective mentality) of Palestinians and Muslims in the wider world making the sign of three to celebrate the kidnap and murder of the three Jewish boys – Gilad, Eyal and Naftali.  We have to start feeling each other’s pain.  BUT the wider world has a huge responsibility – stop demonising Israel, see the conflict from both sides, don’t devalue Jewish deaths.

And why oh why the outcry about Israel defending its citizens and not a word from Hamas about the daily slaughter of Palestinians, Arabs, and Muslims in Syria, in Iraq, in Afghanistan, in Pakistan, in Nigeria – 1000s have been killed, 100s of 1000s; but apparently that doesn’t merit comment by organisations such as Hamas.  But if a Jew kills one Palestinian – then the gates of hell open, literally from Hamas and metaphorically from the BBC, the western Media, the UN.  Wake up people.  Israel is not the problem here. I yearn for peace, I truly do.  And I would reach out to anyone willing to reach back – but it’s not happening except in tiny tiny pockets.  And the BBC doesn’t report those….And since I sat down and wrote this last night – 100s and 100s more sirens and rockets, as far as north of Tel Aviv, to Raanana, to Jerusalem…  HUNDREDS MORE.   I have friends and families sleeping in shelters and bomb rooms tonight; summer camps and nurseries closed in the South; terror hour by hour.  What would you want Britain to do if someone was raining down rockets from Brighton, or Reading, or St Albans onto Downing Street (that’s an equivalent distance from Gaza to Tel Aviv –just 44 miles, 44!)?   Would we be asking the British government not to retaliate, not to seek out the perpetrators and neutralise them?   No we would not.  We would be demanding those firing the rockets stop – now.  And if they didn’t, we’d make sure they did.  We would not be questioning calling up the reservists (as Lyse Doucet has done today).  Think on it.  Imagine the sirens and then think what you would do.   Shame on the BBC (as ever).

About the Author
Professor Liz Lightstone is a Nephrologist, a wife, a mother, and a passionate Zionist living in London but with a home in Israel.
Related Topics
Related Posts
Comments