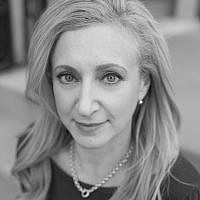 The Blogs
Lara Friedman
Apply for a Blog
Advertisement
Please note that the posts on The Blogs are contributed by third parties. The opinions, facts and any media content in them are presented solely by the authors, and neither The Times of Israel nor its partners assume any responsibility for them. Please contact us in case of abuse. In case of abuse,
Report this post.

Last week, Jewish Federations of North American (JFNA), an organization representing federations across the United States, opened the door, as a matter of formal policy, to taking Americans to visit Israeli settlements. These are the areas located east of the 1949 Armistice line separating Israel and the occupied territories (aka “the Green Line”) in which Israel has been actively settling its citizens since 1967. This decision, upending longstanding JFNA policy, doesn’t come in a vacuum. Rather, it comes in the context of a campaign to legitimize settlements in the eyes of American law and in the minds of American Jews — contrary to consistent US law and policy since 1967 rejecting the legitimacy of both settlements and the occupation, and contrary to the vital interests of Israel.

Make no mistake: settlements are the bricks-and-mortar expression of an ideology that prioritizes land over peace, and values the expansion of Israel’s borders over Israel’s democracy, over its security, and over good relations with the world. Generations of Israeli generals and security experts have concluded that a peace agreement with the Palestinians is vital to Israel’s security, and that such an agreement will have to be based on the Green Line, with limited border modifications agreed to by both sides. Continued Israeli settlement expansion and obfuscation of the Green Line threaten the achievement of such an agreement and undermine Israel’s security.

Exploiting concerns about boycotts, divestment, and sanctions (BDS) against Israel, the ongoing settlements legitimization campaign promotes the view that treating settlements as different from sovereign Israel is anti-Israel and even anti-Semitic. Already this campaign has produced legislation in Congress and in state legislatures across the country (both introduced and adopted) effectively erasing the Green Line and legislating American support for settlements. JFNA’s decision to open the door to bringing visitors into the settlements for “fact-finding” missions appears to fit neatly within this trend.

Does that mean, perforce, that JFNA’s decision is a win for the settlements? That depends, entirely, on JFNA itself. Because the onus is now on JFNA to demonstrate that this politically fraught policy shift is truly about “fact-finding” and is consistent with support for a two-state solution, rather than a step intended to legitimize settlements. What JFNA must do to achieve this is clear.

First, it must release the exact details of its policy, and in parallel must publicly articulate its rejection of the erasure of the Green Line and of any conflation of Israel and the settlements.

Second, it must make clear, as a matter of principle and of policy, that it differentiates between Israel and the occupied territories — including making clear that its new policy regarding visiting settlements does not mean that, in the name of supporting Israel, it will be directing funds to projects across the Green Line.

And third, JFNA must adopt a parallel policy of giving equal time and visibility on its fact-finding visits in the occupied territories to Israeli and international organizations working to end the occupation — organizations with experience and expertise on the issues, and connections to Palestinians impacted by settlements on the ground.

Thus, if JFNA is going to bring Americans to visit the settlement of Ariel, it must program equal time for them to see the facts on the ground with, for example, Peace Now — which can help these visitors understand how Israeli governments have incentivized Israelis to move to settlements, teach them about Ariel’s impact on security, infrastructure, and movement and access for Palestinians in the area, and introduce them to Palestinians living in Ariel’s shadow. If JFNA visitors are going to come and sit with settlers in Hebron, JFNA must ensure they spend equal time with, for example, Breaking the Silence — which can educate them about what the Hebron settlements involve in terms of Israeli security arrangements, and introduce them to Palestinians whose lives are shaped by settlers and the soldiers who protect them.

Likewise, if JFNA is going to bring people to visit settlements anywhere near the beleaguered Palestinian village of Sussya, it must ensure they spend equal time with, for example, B’Tselem –– which can explain how it is possible that Israel is planning to demolish virtually an entire Palestinian village, and introduce them to Palestinians living under an Israeli military regime that makes it nearly impossible for them to build legally on their own land.

And if JFNA is going to take people to visit settlers in the East Jerusalem neighborhood of Silwan, it must make sure they are given equal time to hear from, for example, renowned Jerusalem expert Danny Seidemann — who can help them understand how Israeli government policies, past and present, are gradually transforming this densely-populated Palestinian neighborhood into a settler-dominated Jewish-biblical theme park.

JFNA’s decision — on the eve of the 50th anniversary of the occupation — to formally open the door to taking visitors to settlements understandably sets off alarm bells. The burden to demonstrate that this move is not just the latest step in the continuing campaign to legitimize settlements falls squarely on the JFNA. Should JFNA fail to do so, then supporters of peace and the two-state solution must demand that this new JFNA policy be reversed.

About the Author
Lara Friedman is the President of the Foundation for Middle East Peace. She was previously the Director of Policy and Government Relations at Americans for Peace Now, and before that a U.S. Foreign Service Officer serving in Jerusalem, Washington, Tunis, and Beirut. Lara is a leading authority on U.S. foreign policy in the Middle East, with particular focus on the Israeli-Arab conflict, settlements and Jerusalem, and on the role of the U.S. Congress.
Related Topics
Related Posts
Comments