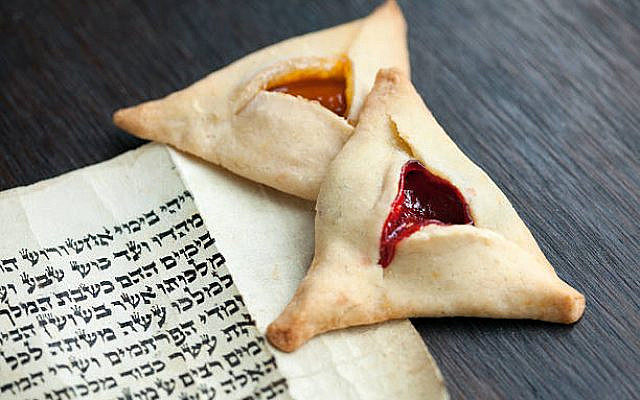 Hamentashen and a megillah for Purim. (iStock)

The Jews undertook and accepted upon themselves…

The Book of Esther is a court story. There is not a single spiritual expression let alone a religious expression from the beginning to its end. Do not look in the Megillah for the name of God because you will not find it. The content is terrestrial and of course problematic (to say the least) in several ways:

We read in the Megillah:

The Jews ordained, and took upon themselves, and upon their seed, and upon all such as joined themselves unto them, so as it should not fail, that they would keep these two days according to the writing thereof, and according to the appointed time thereof, every year; and that these days should be remembered and kept throughout every generation, every family, every province, and every city; and that these days of Purim should not fail from among the Jews, nor the memorial of them perish from their seed. (Esther 9, 27-28. Trans. JPS)

However, the sages in the Talmud, testify that there were initially difficulties in accepting the Megillah as a holy book for public reading and in accepting Purim as a holiday, which was initially mentioned only in the capital Shushan, and describe a kind of argument between Queen Esther (or the Megillah) and the sages:

Esther sent to the Sages: Establish me (Celebrate the reading of the Megillah) for generations. They sent to her: You will arouse the wrath of the nations upon us. She sent to them: I am (the story of the Megillah) written already in the chronicles of the kings of Media and Persia…  (BT Megillah 7a)

The talmudic debate between Esther and the sages continues and the Amoraim even raise the possibility that the Book of Esther not written in the Holy Spirit and therefore is not a Holy Scripture. Finally, the position of the sages is determined in the spirit of the verses in the Megillah regarding the determination of the days of Purim and the sanctity of the Megillah. Of course, the discussion of the Talmud is theoretical and may come to reject criticism of the holiday and the content of the Megillah. Since in the days of the sages, and many generations before them, the people of Israel celebrated in all its communities in the world, the days of Purim by reading the Megillah, feasting and rejoicing.

To what extent increased the importance of the days of Purim?

Purim as a correction to the receiving of Torah at Sinai

We learned in the Talmud:

“…and they stood at the lowermost part of the mount” (Exodus 19:17). Rabbi Avdimi bar Ḥama bar Ḥasa said: teaches that the Holy One, Blessed be He, overturned the mountain above like a tub, and said to them: If you accept the Torah, excellent, and if not, there will be your burial. Rav Aḥa bar Ya’akov said: From here a substantial caveat to Torah. Rava said: Even so, they again accepted it in the time of Ahasuerus, as it is written: “ordained, and took upon them” (Esther 9:27), ordained what they had already taken upon themselves (at Sinai). (BT, Shabbat 88a)

According to the sage’s approach, there was a flaw in the acceptance of the Torah at Mount Sinai in that it forced on the people who did not choose it of their own free will.

The acceptance of the days of Purim by the Jews who survived the reign of Ahasuerus and Haman’s extermination plan in the days of Mordechai and Esther is also a voluntary renewal of the Torah and constitutes a kind of correction to its status at Sinai.

This argument reiterates that the basis for the holiday of Purim, the source of its power, is its acceptance by the people and not the value position or desire of the sages of Israel.

Henceforth stands the commandment of the Megillah, which is a commandment from the words of the sages in line with the commandments of the Torah as written by the author of Shulchan Arukh (following Baal HaTurim):

We cancel Torah learning to hear the Megillah, all the more so for the rest of the mitzvot of the Torah, because all of them are pushed aside before the reading of the Megillah. And there isn’t anything that pushes aside megillah from before it, except for an unclaimed dead body that does not have anyone to bury it… (Shulchan Arukh, Orach Chayim 687:2 Sefaria trans.)

The Rema in his glosses does restrict that it is only that there is enough time to observe the two mitzvot and only then precede the mitzvah of reading the Megillah.

These formulations reinforce the importance of the Megillah and express the great weight given to it not only by sages but by the general public at large.

So, what can be learned from a holiday at the center of which is a rather problematic story spiritually and religiously and the people of Israel for generations consider it to the point of being perceived as a correction to the spoilage of receiving the Torah at Sinai and comparing it to the Torah itself? So much so that Sages define Purim as an eternal holiday that will not be canceled even if the rest of the holidays are canceled for the future to come.

The commandments of the days of Purim repeatedly emphasize the cultural and historical fact that the focus of Jewish existence is on deeds, on the commandments. These are the result of the will of the people for its generations and its traditions. Faith, spiritual and religious ideas are important but not fundamental. These are dressed in retrospect to the accepted and customary practice of the public and in countless sermons try to explain a problematic text, even one that is devoid of spirituality and religiosity.

The big questions about the content of the scroll and the challenge it poses to important values ​​that most of us adhere to in order to change an ingrained cultural existence of the Purim celebration do not have the power. At the theoretical level, a gate is opened for us to continue the many midrashim and commentaries far from what is written in the simplification of the verses. There is no need to spoil the joy and ruin the party. On a practical level the fact that הַיָּמִים הָאֵלֶּה נִזְכָּרִים וְנַעֲשִׂים בְּכָל דּוֹר וָדוֹר מִשְׁפָּחָה וּמִשְׁפָּחָה מְדִינָה וּמְדִינָה וְעִיר וָעִיר  — “these days should be remembered and kept throughout every generation, every family, every province, and every city” ultimately determines that ימֵי הַפּוּרִים הָאֵלֶּה לֹא יַעַבְרוּ מִתּוֹךְ הַיְּהוּדִים וְזִכְרָם לֹא יָסוּף מִזַּרְעָם — “these days of Purim should not fail from among the Jews, nor the memorial of them perish from their seed.”

About the Author
Rabbi Naftali Rothenberg is the rabbi of Har Adar township, Israel, and a senior research fellow at the Van Leer Jerusalem Institute
Related Topics
Related Posts
Comments