This past week, I interviewed R Moshe Silver, up-and-coming writer of the new book on Parsha entitled “The Weight of Gold”. What makes this book unique is that it is written to appeal to people of all backgrounds and nations. Among other things, we discussed the Universality of the Torah: Is the Torah for Everybody?

When I invited R Moshe Silver on the show, I wasn’t sure what to expect. I knew a little of his story and the story behind his book, but it was on a very superficial level. I was pleasantly surprised to have an engaging (and sometimes tense) conversation with the man who is sure to become in time the author of not just this book but many more.

Religious Jews believe as a matter of course that the Torah is both the blueprint for the creation of the world and a roadmap on how to live our lives. Moshe Silver’s novel approach is that there’s no reason that lessons from the Torah text shouldn’t be made accessible to Non-Religious Jews and even Non-Jews.

On our show, Rabbi Moshe describes how this book developed originally as a series of emails to a Non-Jewish friend and coworker of his, and how the essays mamash helped get the guy’s life back on track. Incredible and inspiring.

But here comes the question: The Torah, being full of intricate layers, and veiled details of complex Jewish law, is something that people study over the course of their entire lives, peeling back the many layers and peering into its mighty depths. What can the cursory reader glean from the text?

The answer, according to Moshe Silver, would be a lot.

“I’m not coming to teach Non-Jews how to tovel their dishes”, he says. He’s looking to share with them the universal moral lessons which are to be found in the text.

He cites the dogmatic approach of organized religion as a possible obstruction for people who are interested in being introduced to the text. Being able to ask questions is an important aspect of connecting to what G-d is trying to impart to us.

I found it necessary to defend Judaism, which I believe allows more space for questions than any religion on the planet. Indeed, the methodology of our religion for the past 2000 years has been specifically based on arguing things out. Rabbi Silver, though, felt less certain.

During a different segment of the show, the Rabbi brought up his detractors, those who express concern at the fact that he would teach Torah to a Non-Jew. To them, he says, with a trace of irony, “Ok great… Don’t invite me to your birthday party, I guess?” 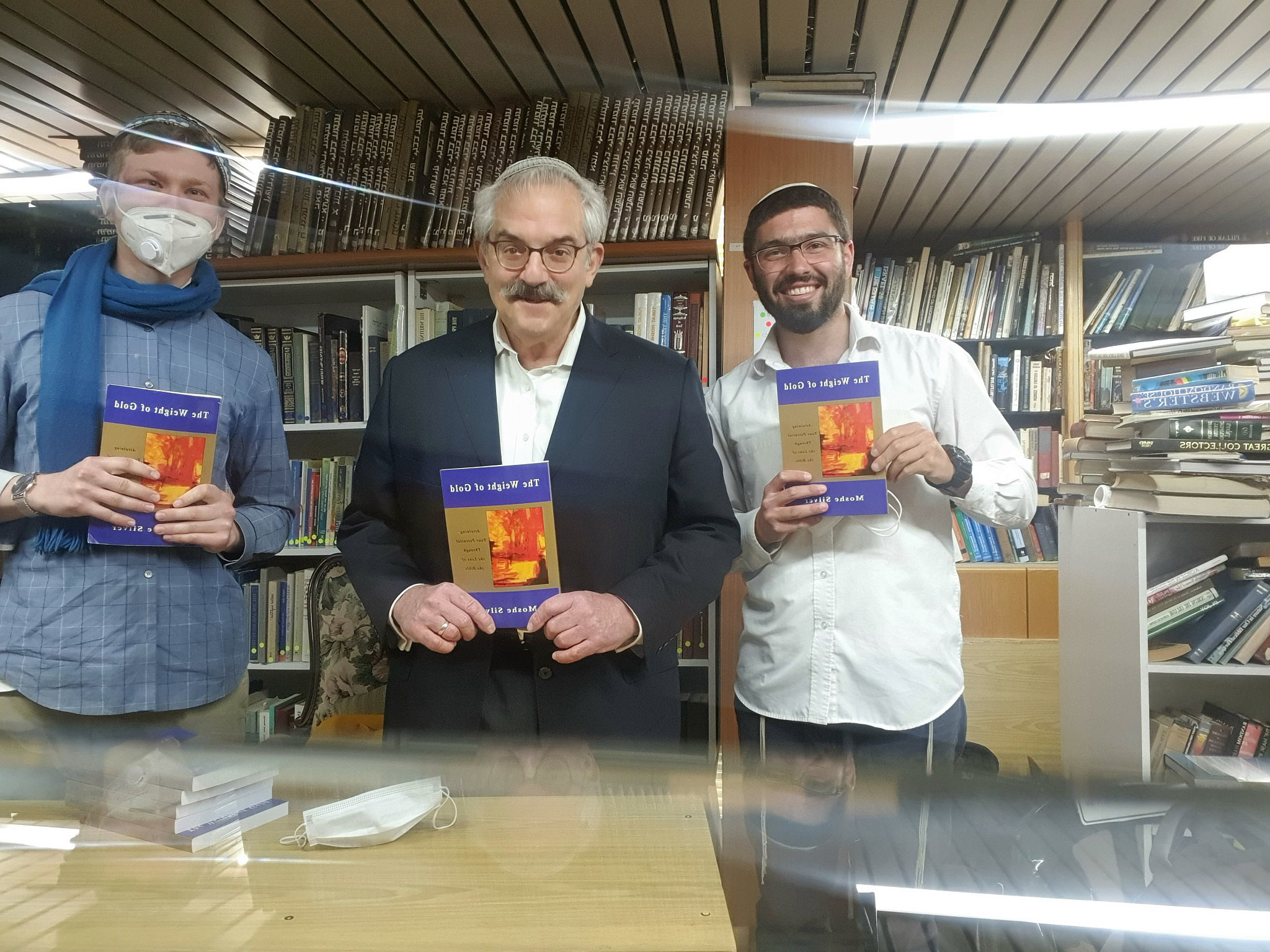 Me, Itai, and author R Moshe Silver hold up copies of his new book, The Weight of Gold

Traditionally, Jews haven’t learned Torah with Non-Jews out of a concern that Non-Jews will intentionally twist and misinterpret the text to suit their aims. To Moshe Silver though, the greater concern is them not having Torah at all. He also points out something interesting: These days there could be Jewish souls who think they aren’t Jewish, and vice versa. Who’s really a Jew today? How do we know?

Often, I feel gratitude towards G-d for having shown me a better life, and for giving me tools to overcome obstacles that will come up in my path I wish other people also had these tools, and when people find them, I’m happy they’re figuring things out.

Ultimately, G-d put us here, but He didn’t leave us here to figure out things on our own. He gave us tools, and those tools are in the Torah. We can see that much of humanity’s concept of morality stems straight from the Torah text, having spread through the world through Christianity.

I put the question to Rabbi Moshe straight: Is the Torah for everyone?