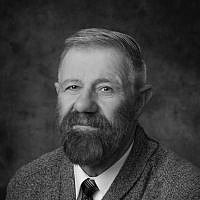 The Blogs
David Arthun
Apply for a Blog
Please note that the posts on The Blogs are contributed by third parties. The opinions, facts and any media content in them are presented solely by the authors, and neither The Times of Israel nor its partners assume any responsibility for them. Please contact us in case of abuse. In case of abuse,
Report this post.

“Neutrality is at times a graver sin than belligerence.” Louis D. Brandeis, U.S. Associate Justice of the Supreme Court.

When I left the ‘Disciples of Christ’ denomination (The Times of Israel, November 5th, 2019), due to antisemitism, I didn’t have far to go to find another church. In my small town was a thriving Wesleyan church and within two months I was an active member.

Background on the Wesleyan Church

The Wesleyan Church is one of many Protestant Christian denominations. The Wesleyans have the reputation as a conservative Bible-believing church; perhaps more conservative than most. This Protestant denomination has its provenance in the figure of John Wesley (1703 – 1791), English theologian, scholar and noted abolitionist. American Wesleyans fill the pews each week with a little over 200,000 parishioners representing approximately half the membership worldwide.

The Wesleyans are a gregarious bunch. All who enter are greeted with a ready smile and hardy handshake. For several months I was content in my new church home. It was about this time that the United States moved the Embassy from Tel Aviv to Jerusalem. I was shocked when a member viewed this action as inappropriate… Jerusalem was not a place for the U.S. Embassy! Their views were not seriously challenged. What discussion occurred lingered briefly then faded into the ether. Red flags went up! The following Sunday I mentioned the evils of Replacement Theology. This will surely get a response! Nothing! Was this taboo… a topic not discussed in polite society? I contacted the Wesleyan Headquarters in Fishers, Indiana, USA and learned the Wesleyans are neutral on the modern State of Israel, BDS and Replacement Theology. There was conformity between parish and denomination. I had made the same mistake twice!

Israel has a historic, legal and biblical right to their ancestral homeland.

God established the Nation of Israel. The Abrahamic Covenant is an unconditional covenant and deals specifically with the land God promises to Abraham and his descendants, an everlasting possession. Genesis 15:18-21. Jews have been residents of Jerusalem for over 3,000 years. They are the only people who claim Jerusalem as their capital, not Tel Aviv!

The Balfour Declaration, November 2, 1917 declared: “His Majesty’s Government view with favor the establishment in Palestine of a national home for the Jewish people.” The San Remo Conference, April 1920, established that the Balfour Declaration would be incorporated into the Mandate for Palestine which states: …” recognition has thereby been given to the historical connection of the Jewish people with Palestine and to the grounds for reconstituting their national home in that county;” On May 14, 1948 Israel declared its independence and on May 11,1949 United Nations General Assembly Resolution 273 was adopted admitting the State of Israel to membership in the United Nations.

“I will bring your children from the east and gather you from the west. I will say to the north, ‘Give them up!’ and to the south, ‘Do not hold them back.’ Bring my sons from afar and my daughters from the ends of the earth.” Isaiah 43:5-6. After nearly 2,000 years the Jews returned to their homeland. The seminal biblical event of our time. The Wesleyans aren’t impressed.

The object of the Boycott, Divest, Sanction Israel (BDS) movement is the elimination of the Jewish state. The BDS movement is no different from the Nazi economic boycott of the Jews in prewar Germany. In the 1930s, BDS led to the Holocaust. The Nazis called for Germans to boycott Jewish owned businesses. Nazi BDS is the direct antecedent to the current BDS movement. This is no different.” Geller Report (May 24, 2019).

“Come, let us wipe them out as a nation; let the name of Israel be remembered no more.” Psalm 83:4. Many Protestant churches, e.g.’ Disciples of Christ’ have joined the BDS movement. It’s unconscionable that these Protestant churches are actively or tacitly supporting BDS, which is nothing more than genocide. Has the zeitgeist of 1930s Nazi Germany returned?

Replacement Theology, also known as supersessionism, is one of the most egregious heresies in church history. This heresy has been the bane of Christianity since antiquity and led to some of the worst atrocities recorded. The premise of Replacement Theology is that the Gentile Churches have somehow replaced Judaism and the Jewish People are no longer part of God’s plan. Balderdash! Gods covenants with the Jewish people are unconditional, immutable and everlasting. They (the Jews) are chosen, beloved…the gifts and calling of God are irrevocable. The Gentile Church is the wild olive branch grafted on to and nourished by the true olive tree (a biblical symbol for Israel). Romans 11:17-18.

The heresy of Replacement Theology arrived early. Church Father Justin Martyr (100 -165 AD, CE) claimed God’s Covenant with Israel was no longer valid, that Gentiles had replaced the Jews. Saint Augustine (354 – 430 AD, CE), considered one of the greatest Church Fathers, agreed with Martyr. Their influence carried into medieval times resulting in the Inquisition, pogroms, relegating Jews to ghettos and general mayhem. The Reformation, early 16th century, was a break from the Roman Catholic Church instigated by Martin Luther. Regrettably the Reformers did not abandon Replacement Theology. In 1543 Luther urged Christians to “set fire to their synagogues or schools.” By the way, in 2016 the Evangelical Lutheran Churches in America (ELCA), 3.7 million strong, triennial Churchwide Assembly adopted the Corporate Social Responsibility review team to screen companies profiting from Israeli occupation. In August 2019 they voted (96% in favor) to cut foreign aid to Israel…”to ensure U.S. taxpayer funds not support military detention, interrogation, abuse or ill-treatment of Palestinian children.”

Adolf Hitler quotes Luther in his book Mein Kampf: “as a great warrior, a true statemen and great reformer.” It is speculated that Kristallnacht, (Night of Broken Glass, November 9-10, 1938) was planned to coincide with Luther’s birthday of November 10th. Replacement Theology was a contributing factor to the Holocaust.

The Wesleyans and the Church in Laodicea

Laodicea was located in Anatolia (the near-east part of modern Turkey), and site of an early first century church. This church is described in the Book of Revelation as lukewarm (neutral).

A hot drink is comforting, a cold drink refreshing, a lukewarm drink…nauseating! Other interpretations of the metaphor see hot as zealous for the faith, cold as hostile to the faith and lukewarm…still nauseating!

A lukewarm approach to heresy is heresy, and the heresy before us is antisemitism.

A year passed and the Wesleyans remained steadfast in their neutrality on Israel, BDS and Replacement Theology. I could no longer continue my fellowship and took my leave.

About the Author
David Arthun is a Christian Zionist. He received his Ph.D. from New Mexico State University and completed postdoctoral research in neurotoxicology at the University of Louisiana. He is an Army Veteran, retired from U.S. federal civil service and resides in his home state of Montana, USA.
Related Topics
Related Posts
Comments