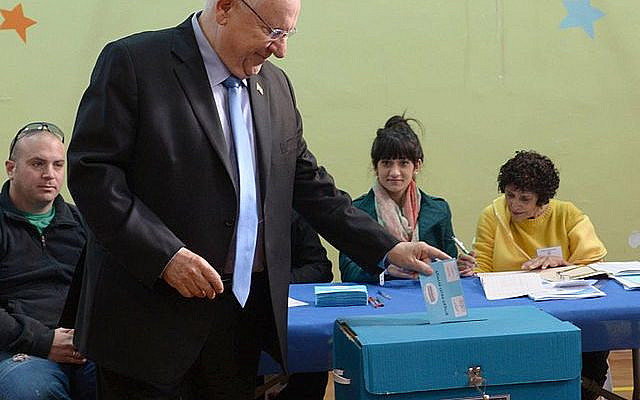 In a place where there are no human beings, strive to be a human being. — Pirkei Avot 2:5

Now that our celebrations of Israeli Independence Day are over in Israel, we return to “normal”. This means that the efforts to cobble together a coalition government in Israel resume tomorrow. Will they be all about “shticks and tricks”, bribery and political blackmail? Or will they contain any moral reasoning about what is best for Israel during the 19 days ahead?

Last week, the president of Israel, Rubi Rivlin, decided to give the mandate to form another coalition government in Israel to Benjamin (Bibi) Netanyahu, the head of the Likud party. In his formal speech and in his statements to the press, one could easily see that on a moral level, Rivlin was terribly bothered by this choice. But he felt that he had to do it for reasons that are not all that clear to me or to many people in Israel. He explained that he was doing this reluctantly, but that he had no choice. But this is not the case. In the learned opinions of many experts in Israel, President Rivlin did not have to give the mandate to the M.K. with the highest number of recommendations, according to Israeli Law. He could have used his discretion to do what is best for the country but he did not do so. Unfortunately.

President Rivlin could have chosen otherwise. Instead of just telling us that he was troubled with what he was about to do, he could have made the correct  moral choice and not given the mandate to someone who is known to the majority of Israeli citizens as “the defendant” since he is currently on trial on three very major counts of corruption in a court of justice in Israel—BRIBERY, FRAUD, and BREACH OF TRUST. These are not minor cases, to use great understatement. They were prepared by serious and sustained investigations for years in the highest echelons of the Israeli Police and in the Ministry of Justice–two institutions which Netanyahu has attacked relentlessly in many  horrendous speeches. This included another unbridled attack – full of lies and baseless accusations — which he delivered on national television in an outrageous performance, mostly to please his populist base of fans last about 12 days ago, on the very day that the evidentiary stage of his trial had begun!

Nevertheless, now that he has the mandate from the president, Netanyahu will try to use all his “shticks and tricks” (his term) to form a government during the next 21 days.  He will offer various politicians all kinds of bribes and promises (most of which he will not keep—if you don’t believe me, just ask Alternate PM Benny Gantz) because he is desperate to remain Prime Minister. The main reason for this is so that he can form a  fully right-wing government which will give him immunity from prosecution or appoint people to the Ministry of Justice who will simply cancel the trial!

Hopefully he will not succeed in creating the most ultra-nationalist and ultra-religious government in the history of Israel!  But there is a small chance that he might pull it off, God forbid. He has become a very dangerous and demonical “leader” for the present and future of Israel!  He has become an extreme populist, like Trump was in America (who , thank God, was defeated) and like Erdogan is in Turkey and Orban in Hungary.

But Rivlin and Netanyahu are not the only ones to blame for the 28-day period of suffering which we citizens of Israel are enduring now. There are some other immoral or amoral culprits in our political system at the moment.

One of the main ones is Gideon Saar of the “New Hope” party or as I prefer to call it the “False Hope” party. He abstained from recommending any one to form the government when he met with President Rivlin last Sunday.  This was a major blunder, since his party’s recommendation could have led to a virtual tie,  which could have prompted the president to nominate Yair Lapid, the leader of “There is a Future”(?) party to try to form the government. (Lapid is the leader of the second largest political party in Israel and therefore he is supposedly the leader of the “Pro-change” or “anti-Bibi” block.) Saar had promised the people of Israel that he will settle for nothing less than a regime change, i.e., he wants a new Prime Minister! Yet, his abstention has led to a situation whereby Bibi is now trying to form the government. Saar has acted unethically in a political environment in Israel where ethics don’t seem to matter much any more

The other main culprit is Naftali Bennett of the Yamina (“The New Right”) political party. He has been amoral all along since he has refused to say clearly which side he is on. On the one hand, he is supposedly in favor of  “change”, which means electing a new prime minister other than Bibi. On the other hand, he fancies himself as the next prime minister and is open to the highest bidder, whether it be Bibi and the Likud during the weeks ahead, or Lapid and the opposition (to Bibi) parties during the weeks after Netanyahu (hopefully) fails to form a government. Just like Bibi, Bennett is mostly interested in himself—he has a very large and growing ego. He is demanding to be prime minister in some rotation agreement even though he only garnered 7 mandates in the recent elections. What chutzpah!  And it may work since many people are prepared to do desperate things to avoid another election.

Moral decision-making and behavior seem to be totally absent in the current Israeli political scene, especially during this season of coalition-forming which is a sordid ordeal of wheeling and dealing by politicians who show little interest for the common good of the country and much more for the success of their particular party and its  “base”. (Some of these supporters are indeed very base!) The system has been unpleasant for a long time, but now it is reeking of immorality and survivalism (for Bibi) as never before. It is high time to reform our election system in Israel. I am hearing that people are beginning to discuss some creative ideas for reforming the system, such as preventing people who get elected by one party to switch to another one.  We have to admit that we have a sick electoral system, which needs radical surgery and revision–not just band aids and paracetamol–the sooner the better.

In addition, I have recently learned that neither the government of Israel nor the Knesset (our parliament) has a written code of ethics, even though there were some attempts to prepare such documents several years ago. Perhaps this is one of the reasons why so many of our politicians act unethically so often, without reservations or worries.

One can only hope that the all the forces for change will not give in to Bibi’s bribes and blackmail attempts during the next month. And then a less evil, less scary , more sane and more responsible government can be formed.  Not a “light unto the nations”—which Israel used to strive to be long ago– , not a government of high ethical standards, not a government which will seek peace with its neighbors and not one which will tackle long-neglected social problems. But at least one without Netanyahu’s autocratic domination and one without his self-centered ultra-orthodox and neo-fascist partners. This would appear to be the best that we can do under the current circumstances.

I remain hopeful even if it is very difficult.