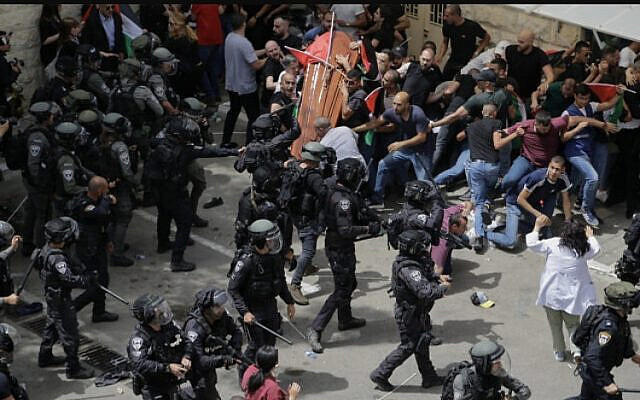 Apparently, all I need to do to get in the newspapers or on TV is to grab an axe and start swinging it round people’s bodies and heads until at least a few people are slaughtered. Then I get my name in the headlines and even a photo of myself on the front page of not just national newspapers, but international too. The video will go viral over YouTube and I will become a celebrity overnight.

That’s how I get noticed, fighting for my cause.

However, if I choose, on Nakba Day, to sit with Palestinians or Arab Israelis and listen to their sorrowful and tragic accounts of how they were thrown out of their homes, lost their lands and are still suffering to this day – without their original homes, without equal rights and without the respect and love promised to them in the declaration of independence – I am totally ignored by the media.

Even though I have been to dozens of these circles, and protests, and demonstrations, and conversations, and meetings, and events, and conferences, focused on peace-work and how to make a lasting and equal peace for our brothers and sisters, I am still totally ignored by the media.

I guess I could just go and sacrifice a goat on the Temple Mount.

Why is it that violence makes so much more noise than peace? Since when was the sword mightier than the pen?

Yesterday, my friend in England sent me an American article stating beyond all reasonable doubt that the Palestinian journalist who was killed this week, God rest her soul, was certainly and deliberately killed by an Israeli sniper. I wrote back, very confused, having been with my Palestinian and Israeli friends at the Nakba event, who agreed so far there is no evidence of who killed Shireen Abu Akleh.

What does it matter, we said, who did it, anyway? An innocent and courageous woman is dead, another fatality of the dreadful ongoing violence here.

I wrote to my friend and asked her to be more careful with her sources.

More worrying than her bias, is how the article got to be published at all.

It’s always the death, terror, blood and gore that make the headlines. Of course it is. Everything else is boring, right?

On my Facebook page I often post the peace events I am attending, helping with, donating to, running for, in the hope people all over the world will realise so many are working towards peace. A significant percentage of the population. Each and every day. Here.

A few weeks ago, we travelled to Tel Aviv for a party hosted by a leader of the Oz V’Shalom peace organisation, where a guest asked me why the terror is getting worse; why is nothing being done?

People genuinely believe this. People read and watch the media and believe hatred and violence is all there is.

When I think about all the peace activism I, my family, my friends and my neighbours are leading, supporting and and involved with, I am so frustrated.

But our work is not recognised by the media. It’s not picked up. It’s not reported. People just think there’s a status quo here since Netanyahu, and any second now the coalition government will collapse and we will all go back to increasing the despicable oppression in the West Bank and Gaza.

It’s not true, but is portrayed this way by a media whose awful propensity is just to publish bad news.

I think I understand now, finally, why Emily Davison threw herself under a horse, apparently to attract attention and get the media and thereby the public truly involved in what the suffragettes were fighting for. To hear them. To see them. To act for them.

On Nakba Day, when a hugely courageous Palestinian Arab Israeli woman in the group told us, “I didn’t really want to come to this. We share our stories year after year, but what actually happens? I want to be doing something!”, I had tears in my eyes reflecting hers.

Of course we are doing something by being in these meetings and circles and peace events – of course we are supporting each other and showing we are friends and our land can be shared and we can live in peace – but if there are many, many people in the world who don’t see that, what are we supposed to do?

Do the peacemakers also have to goad the police into violence against them?

Do we really need to murder or inflict harm for our voices to be heard?

Is there no other way?