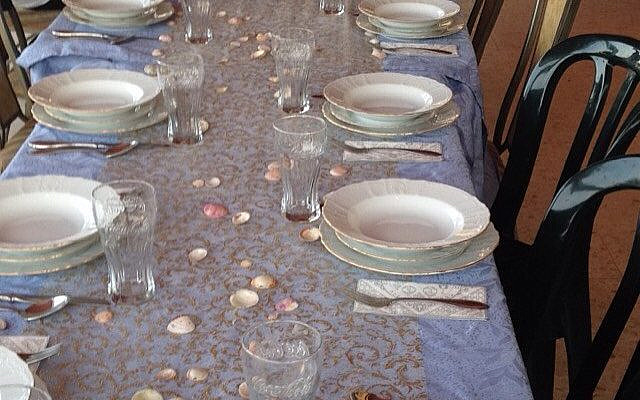 My Divrei Torah doesn’t usually aim to inspire. I am a teacher and find myself more comfortable educating than inspiring. In this short essay I hope to accomplish both. I hope these words explain the mitzvah of simcha (happiness) on festivals and inspire our people past the current situation that prevents complete happiness this Pesach.

Many people have been asking how we can recite the proclamation of the Haggadah this year, “Whoever is hungry, let him come and eat.” After all, we are prohibited from inviting outsiders to our Pesach Seder this year. While most Rabbis decided that we say the proclamation this year, some have even suggested omitting the invitation to others.

There is a related but even bigger challenge confronting the Jewish people this year. Maimonides wrote that on the festivals, “A person is obligated to be happy and in good spirits; he, his children, his wife, the members of his household, and all those who depend on him, as it is written in the Torah “You shall rejoice during your festivals.” Maimonides continued, “The “rejoicing” mentioned in the verse refers to sacrificing peace offerings. Included in the mitzvah to rejoice is that he, his children, and the members of his household should rejoice, each one in a manner appropriate for him.” Maimonides went on to explain that to fulfill the mitzvah of rejoicing on the festival and in accordance with their nature, men should drink wine and eat meat, women should buy new jewelry and clothes and children should eat candy.

Maimonides cautioned, “When a person eats and drinks as part of his rejoicing during the festival, he is obligated to feed converts, orphans, widows, and others who are destitute and poor. In contrast, a person who locks the door of his home, eats and drinks with his children and his wife, without feeding the poor and the destitute, is not fulfilling the rejoicing associated with a mitzvah, but rather the rejoicing of his gut.” Maimonides, quoting the prophet Hoshea, had harsh words for such a person, “Their offerings will be like the bread of mourners, all that partake thereof shall become impure, for they kept their bread for themselves alone.” This happiness is a disgrace for them” Maimonides added, “One who brings happiness to the hearts of these unfortunate individuals resembles the Divine Presence, which the prophet Isaiah described as having the tendency “to revive the spirit of the lowly and to revive those with broken hearts.”

We are told it is dangerous to invite others to our Pesach seder this year. We are prohibited from inviting guests, including “converts, orphans, widows, and others who are destitute and poor.” How then can we fulfill the mitzvah of rejoicing on Pesach if we can’t invite guests to our house? How can we rejoice while “locking the doors to our home?” How can we be happy knowing others are sitting alone?
I grew up in a special place. Fair Lawn, New Jersey is known for its chesed and hospitality. I didn’t spend each Pesach at a fancy hotel, but I saw a Pesach program in action at Rabbi and Rebbetzin Yudin’s house each year. The “Yudin Hotel” served hundreds of people over Pesach. “Converts, orphans, widows, and others who are destitute and poor” were regulars and treated like kings at the seder.

My parents were so giving, that when I went to Yeshiva, my bedroom was given to the assistant Rabbis serving our Synagogue. My in-laws constantly hosted local Israelis visiting a nearby Air Force base and even took in foster children. My wife is a hostess par-excellence and I’m having trouble imagining a seder and festival meal without guests. This year will be our first seder and festival in over twenty years of marriage without guests. It simply isn’t a Chag Sameach (a joyous festival) without guests. How can it be?

From a legal perspective, the mitzvah of rejoicing on the festival requires hosting guests. But having guests isn’t what makes us happy; studying Torah and prayer, meat, wine, clothes and candy make us happy. Not hosting guests doesn’t inhibit joy, it inhibits the proper joy that is required. What negates the obligatory joy is choosing to close our doors to those who need a place in our home. This year we aren’t choosing to close our door, we are forced to keep to ourselves. It’s beyond our control.

Is that it then? Are we fated to not have the proper simcha (joy) this year at Pesach? I’d like to suggest that we can still fulfill the mitzvah of rejoicing on the chag. We can call someone we know to be alone this Pesach on Erev Pesach. We can spend a few hours of the day lifting the spirits of people we know will be alone this year at the Seder. Let’s send them flowers. Let’s make their Erev Pesach so happy that their joy carries over to the festival. Let’s make sure they’re so happy that even as they sit alone at their Seder they know they’re not alone. Let’s tell them that we will be thinking of them at our Seder. Let them know they’re not forgotten, let them know that they might be geographically distant, but they’re so close where it counts – in our hearts. If we spend just a few hours this Erev Pesach making calls to the people we would’ve invited over this year, if we would tell them some of the Divrie Torah we’ll be telling at our table, if we joke with them, and tell them how much they mean to us, they’ll know they’re loved and will rejoice this festival – and so will we.

About the Author
Rabbi Uri Pilichowski is an educator. As a teacher, author and speaker, he teaches Torah and Politics, where he specifically emphasizes rational thought and conceptual analysis.
Related Topics
Related Posts
Uri Pilichowski
Comments