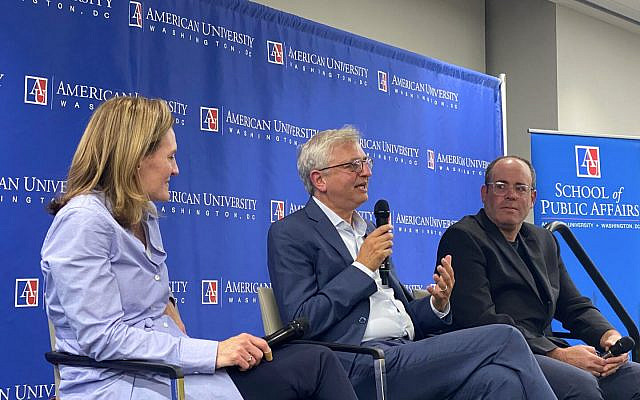 From left: Cynthia Miller-Idriss, director of American University's Polarization and Extremism Research & Innovation Lab (PERIL); Michael Brenner, director of AU's Center for Israel Studies; and Chris Edelson, an assistant professor of government at AU and an expert on the limits of presidential powers, hold an Oct. 20 discussion on extremist threats to American democracy. (Photo by Larry Luxner)

WASHINGTON — A violent far-right attempt at insurrection. Scapegoating of minorities. Hints of antisemitism. Runaway inflation, even a “birther” conspiracy. Sounds a lot like Donald Trump and the Jan. 6 riot at the Capitol?

Indeed, it does. But in fact, we’ve seen this movie before—and it all played out in Weimar Germany in the 1920s, precipitating Adolf Hitler’s rise to power.

The similarities between Germany’s political crisis 100 years ago and the current threats to democracy in the United States are striking, say three experts who spoke at an Oct. 20 panel hosted by American University’s Center for Israel Studies.

“Of course, Donald Trump is not Adolf Hitler. Nobody is Hitler,” suggested Chris Edelson, an assistant professor of government at AU’s School of Public Affairs. “But that can actually help someone who’s an authoritarian, because he can always say ‘I’m not Hitler.’ The central point is that people like Trump do not have to be Hitler to be dangerous. They can still destroy democracy. The warning signs are chilling indeed.”

Edelson’s research interests focus on the presidency and constitutional issues. His first book, Emergency Presidential Power: From the Drafting of the Constitution to the War on Terror, was published by the University of Wisconsin Press in fall 2013. His second book, Power Without Constraint: The Post 9/11 Presidency and National Security, appeared in 2016.

Joining Edelson on stage were two other noted scholars.

Michael Brenner, director of AU’s Center for Israel Studies, is also the chair of Jewish history and culture at Ludwig Maximilian University Munich. Brenner, international president of the Leo Baeck Institute, has written nine books; his latest is Hitler’s Munich: Jews, the Revolution, and the Rise of Nazism.

More than 100 people attended the panel, which was moderated by Pamela Nadell, director of AU’s Jewish Studies Program. 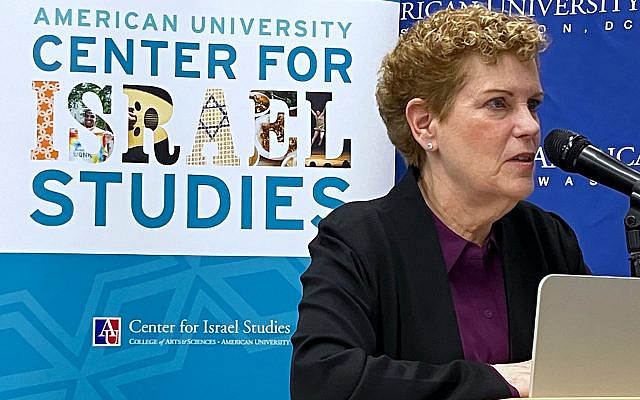 An early hint of things to come?

Brenner, the son of Holocaust survivors, shed light on the story of Kurt Eisner, a Jewish socialist revolutionary who overthrew the Wittelsbach monarchy to became premier of the state of Bavaria. Yet his critics attacked him not only for being a Jew, but for having actually been born in Galicia; he was eventually assassinated in 1919—the year after Germany’s defeat in World War I—speeding the demise of the Weimar Republic and the rise of Adolf Hitler.

“Eisner was always characterized not just as a Jew, but as an Eastern European Jew, which was a total lie; he was born in Berlin. They said his real name was Kosmanovski,” according to Brenner. “There was also a very prominent conspiracy theory, the ‘stab in the back’ legend which said that of course Germany could have not lost the war. It was the enemy in our midst, the Jews and the left-wing socialists.”

In much the same way, said Brenner, Trump came to political prominence as early as 2010 by spreading the idea that Barack Obama was born not in Hawaii—as his birth certificate attests—but in Kenya.

“Donald Trump seizes on this birther lie and channels it into racial resentment against the first African-American president. Like with Hitler, there’s a lot of power in scapegoating a minority,” Brenner said, estimating Munich’s pre-war Jewish population at around 11,000, or 2% of the total. “We’re seeing the same thing today with transgender people, who are maybe 0.5% of the population. You can get enormous mileage out of that resentment for political gain.” 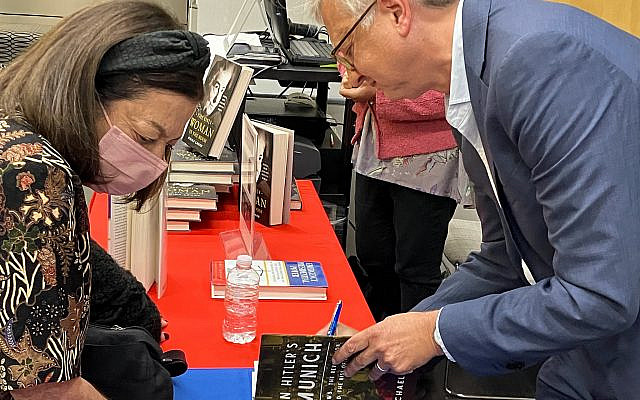 Michael Brenner, director of American University’s Center for Israel Studies, autographs a copy of his book, “Hitler’s Munich: Jews, the Revolution, and the Rise of Nazism,” at an Oct. 20 event. (Photo by Larry Luxner)

Meanwhile, even as far back as the 1920s, street fights had broken out between communists and Nazis, while judges rarely punished fascist instigators.

“If you were a left-wing extremist, you could get the death penalty, but if you were right-wing, you were a patriot,” Brenner said. “Hitler served a prison sentence of nine months for an insurrection in which people died. I wouldn’t even call it a prison sentence, I’d call it a writer’s retreat. All his friends visited him, and he wrote Mein Kampf during this time.”

The Nazis succeeded in infiltrating not only the judicial system, but the police as well. Yet Hitler ended up as chancellor in a totally legal way.

The politicians, who were not in any way friends of Hitler, thought he could be helpful to them,” Brenner said. “And in 1933, when Hitler finally came to power, it wasn’t through an insurrection, nor was it against the German constitution. He was appointed by the aged president, Hindenburg, as chancellor. It wouldn’t have happened without his enablers—people who already in the 1920s had backed him in Munich and who despised Hitler, but who would now say ‘he is our chance, we will be able to contain him.’”

It’s worth noting, said Brenner, how only four days before the event at which he and his fellow panelists spoke, Trump posted a warning on his social media platform, Truth Social, urging American Jews to “get their act together and appreciate what they have before it is too late!”

“He said he can’t understand how Jews can be Democrats, and refers to ‘your prime minister’ and that they’re not loyal to Israel,” according to Brenner. “The history of Germany in the 1930s and 1940s is already written; you know what’s going to happen. But our history has not been written yet. We see warning signs and there are things we can do about it.”

‘Deradicalize’ the extremists before it’s too hate

Miller-Idriss, an expert on the role of extremist speech and propaganda, said FBI records show hate crimes and online hate speech at their highest levels in 12 years—and this ranges from antisemitism to anti-LGBTQ rants to Islamophobia.

“It’s worse than you think,” she said. “Trump was a trigger, but this is rooted in trends that began in reaction to Obama’s election, at least five or six years before Trump came onto the scene.” 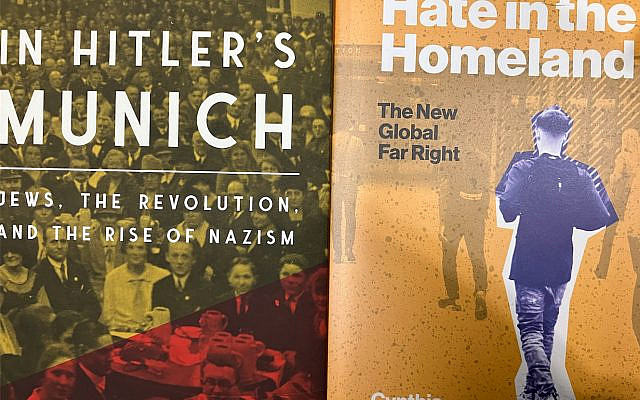 Books written by the panelists at AU’s Oct. 20 event: “Hitler’s Munich: Jews, the Revolution, and the Rise of Nazism” by Michael Brenner, and “Hate in the Homeland: The New Global Far Right” by Cynthia Miller-Idriss. (Photo by Larry Luxner)

It was also around that time that social media became the primary way that propaganda spreads, with a series of horrific domestic terrorist attacks in Oslo, Norway; Christchurch, New Zealand; El Paso, Texas; and Orlando, Florida, targeting the families of left-leaning politicians, Muslims, Hispanics and gays, in that order.

“Why do ordinary people become so easily persuaded by propaganda, particularly in online spaces today?” she asked. “It used to be a manifesto that you had to read. The difference now is that hateful content—whether it’s antisemitic or anti-trans or racist—now finds you.”

Miller-Idriss added: “You run into it in gaming platforms, regular chats, or when people share Holocaust denial memes, or misogynistic memes about trans people. It’s just out there and you have to navigate it. If you know what it is, you leave and reject it.”

The good news, she said, is that people can be prevented from believing such propaganda before they’re exposed to it.

“It’s easy to do,” she said. “We’ve done it through videos as short as 30 seconds. Every single intervention we’ve tried so far has worked. But you cannot deradicalize someone that way. You have to do it individually, one-on-one.”

And that can’t happen soon enough, said Brenner, who warned that the United States is rapidly backsliding—a trend that’ll only pick up speed if the next president cannot or will not assure the American people that the results of the 2024 election will be accepted without question.

“We are in the middle of this right now,” he said. “It seems that yes, we get upset, but not enough. What’s happening is very frightening, and we’re powerless because a large part of the population supports what’s going on.”

Added Edelson: “It sounds like a partisan observation, but whether you support democracy is not a traditional Republican versus Democrat issue. And unless both parties are committed to democracy, I don’t see how the system can work.”

About the Author
Miami native Larry Luxner, a veteran journalist and photographer, has reported from more than 100 countries in Latin America, Africa, Eastern Europe, the Middle East and Asia for a variety of news outlets. He lived for many years in San Juan, Puerto Rico, and the Washington, D.C., area before relocating to Israel in January 2017.