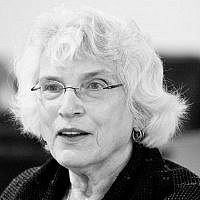 The Blogs
Rochelle Saidel
Apply for a Blog
Please note that the posts on The Blogs are contributed by third parties. The opinions, facts and any media content in them are presented solely by the authors, and neither The Times of Israel nor its partners assume any responsibility for them. Please contact us in case of abuse. In case of abuse,
Report this post.

An open letter to the Israel Ministry of Health:

I went to my Maccabi health plan on Agrippas Street, Jerusalem, on August 10 for my scheduled third COVID-19 vaccine shot at 1 PM. I am an Israeli citizen well over the age of 60 and entitled to this vaccine. I had received an invitation from Maccabi to make an appointment for the third shot, which the Health Ministry had decided is important for fighting the pandemic and especially the delta variant.

I was already sitting next to the nurse with my arm ready for her to jab me when she looked at my record and asked if my first two shots had been in Israel. When I said no I was brought to a supervisor. I was told that at 10:15 that morning, two hours and 45 minutes earlier, the Ministry had informed Maccabi that they could no longer give a third shot to people who had received the first two abroad. There was zero time between proclaiming this mandate and its implementation, which is not a correct bureaucratic procedure by any means. I was not informed beforehand and thus went out in the heat and wasted my time, energy, and money to get to the appointment. This is no way to run a government agency, and denying senior citizens this third shot is against the Ministry’s own policy. The stress that the situation caused is yet another factor.

I received my first and second shots of Pfizer at Mt. Sinai Hospital in New York City in January-February 2021, during a time that it was not safe for me to return to Israel. When I did return in early July, I had a serology test showing antibodies, which the lab sent to the Ministry. I went to Maccabi on August 1 with my CDC card with vaccine data, and this was put into the system and sent to the Ministry. When I received my invitation from Maccabi for the third shot, I booked my appointment for August 10. I have already received a green pass from the Ministry, based on my two vaccine shots in New York, so they are indeed registered and accepted in the Health Ministry’s system. I would like to get my third shot as soon as possible, which will protect me and those around me, according to the Ministry of Health. Maccabi said I will be contacted. I am waiting.

About the Author
Dr. Rochelle G. Saidel is founder and executive director of Remember the Women Institute, co-editor of Sexual Violence against Jewish Women during the Holocaust, and Exhibition Coordinator for VIOLATED! Women in Holocaust and Genocide. See www.rememberwomen.org.
Related Topics
Related Posts
Comments