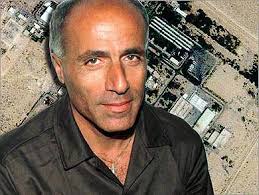 This Shabbat I met a traitor. I walked to East Jerusalem today because my canker sore was killing me and on Friday I accidentally left my medication for the sore at a bookstore café on Salah Al Din Street. I got there about 2 pm and sitting outside the café was none other than Mordechai Vanunu. As a reminder, he is the convicted Israeli traitor who secretly photographed Israel’s nuclear power plant in Dimona and sold the photos and information about Israel’s nuclear weapons capability to a London newspaper. Consequently he was kidnapped by the Mossad, brought back to Israel and sentenced to 18 years in prison.

Being the introvert that I am I sat down at his table introduced myself and I told him that what he did was wrong. Aside from that we had quite a pleasant conversation.

From the day he was released Vanunu has wanted to emigrate but the General Security Services won’t allow him. It claims he is a security threat and he could pass more information to foreign agents. He has been denied his passport for more than 12 years. He hates Israel, he converted to Christianity and he wants to live in Norway with his Norwegian wife. The fact that Israel prevents his emigration and tries to microscopically control his life – a full 12 years after he completed his full sentence of 18 years in prison – is just plain wrong.

First, any information Vanuna had is already in the public sphere.

Second, any claims that he has more information that could threaten our security is bolderdash. He was arrested more than 30 years ago. His information is 30 years old. Let me repeat: thirty – years – old.

Third, Vanunu – in his current situation – is very capable of passing information to foreign agents. I, for example, sat with Vanunu and spoke with him for 30 minutes. Depriving him of his passport does not prevent him from communicating with people. If the GSS truly believed Vanunu was a true threat to the security of the State of Israel, it would put him in prison before he commits the crime: the same way it does to hundreds of Palestinians who are now in Israeli prison under Administrative Detention.

Clearly Vanunu’s confinement to Israel is nothing less than petty vengeance; it has nothing to with security. The same petty vengeance is currently being meted out by the American government to Jonathan Pollard by preventing him from leaving America. His information, by the way, is also 30 years old. Let me repeat that…

Both Vanunu and Pollard served their sentence. They did their time. Period. End of story. Israel and America should stop playing games with the lives of these two men. They are former criminals yet remain human beings and they are due human rights: freedom of movement is a basic human right. One wants to leave Israel because he hates it. The other wants to move to Israel because he loves it.

Between Rosh Hashana and Yom Kippur, known as ben keseh l’asur, tradition says peoples’ futures are inscribed and sealed. I pray that Netanyahu and Obama not necessarily demonstrate mercy or compassion but simply follow justice and human decency: let these two men – both in their 60’s – move on with whatever remains of their ever diminishing lives. Shana tova!

About the Author
Robby Berman is a tour guide and journalist living in Israel for more than 30 years. He is a graduate of Harvard University (Kennedy School of Government, MPA), Baruch College (MBA) and Yeshiva University (BA). He is also the author of the book Min Taq Taq: A Collection of Arabic Idioms and Expressions in the Palestinian Dialect.
Comments