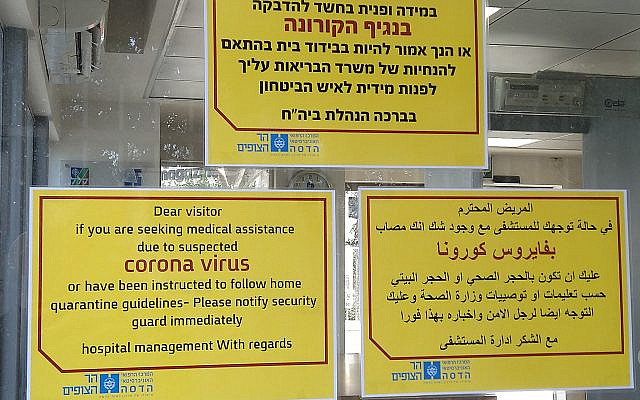 Signs at the entrance to Hadassah Hospital in March 2020

This note presents a statistical analysis of the 36 members of the Organisation for Economic Co-operation and Development (OECD) as of May 5, 2020, looking at their rate of Covid-19 deaths per million of population.  It finds that Israel’s fatality rate is lower than 22 countries but higher than 13 countries.

The ten worst countries in the OECD by this measure are Belgium, Spain, Italy, United Kingdom, France, Netherlands, Ireland, Sweden, United States, and Switzerland, in that order.

The ten best countries in the group by this measure are Australia, New Zealand, Japan, Slovakia, South Korea, Latvia, Greece, Chile, Lithuania and Mexico, in that order.

This analysis has looked at the number of fatalities rather than the number of confirmed cases because the latter figure depends very much of the extent and accuracy of testing, which varies greatly among the countries in the sample.

It is recognized that some countries may have consciously under-reported fatalities;  however, it is hoped that that is not the case for members of the OECD.  It has been argued that the number of deaths attributed to Covid-19 is likely an understatement in most countries. A comparison of total reported deaths in recent months with average numbers of deaths for these months in previous years better captures the differential number due to Covid-19.  However, at this time such data are not yet available for all OECD countries.  Therefore, the analysis looks at the Covid-19 deaths reported in the Johns Hopkins database.

There has been much criticism of the performance of the U.S. government in its response to the advent of the pandemic, and as ninth worst out of the  36 countries in the list the criticism is certainly justified.  However, the countries of Western Europe clearly have fared much worse in relative terms than the U.S.

It has been widely observed that the age profile of the population is an important determinant of the fatality rate, with countries having a larger share of elderly in their population suffering more deaths.  Other factors include the openness of borders, the extent of foreign travel by a country’s citizens, the adequacy of medical facilities and staffing, and, of course, the timeliness and enforcement of the government’s controls on borders and incoming flights, its social distancing rules, testing, and other protective measures.  Much further analysis of the data is needed to determine the relative contribution of these and other factors to the differences among countries.

While Israel’s favorable ranking undoubtedly reflects, in part, the performance of its government, it has to be acknowledged that Israel has not been among the safest places to have been within the OECD.

As Israel and other countries move to relax the restrictions that have been put in place, in order to promote economic recovery, it is hoped that Israel’s relative ranking won’t suffer over time.