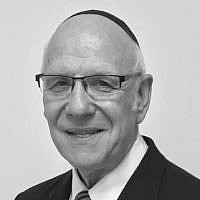 The Blogs
Neil Winkler
Apply for a Blog
Advertisement
Please note that the posts on The Blogs are contributed by third parties. The opinions, facts and any media content in them are presented solely by the authors, and neither The Times of Israel nor its partners assume any responsibility for them. Please contact us in case of abuse. In case of abuse,
Report this post.

I woke to the unusual sound of a police bullhorn blaring directives to, I assumed, a reluctant driver.

I walked out of my apartment some time later to witness a traffic jam in front of my building.

And I returned from shacharit to see a crossing guard at my corner (where there never was one before), berating a jaywalker and pulling aside overanxious motorists.

Welcome to Israel! It was September first, the first day of school

And in Israel, it is treated as an unofficial holiday.

As a new immigrant to the State, I may tend to overreact to the simple things that I once took for granted in the US.  There is a first day of school there as well (something I am well aware of, as a teacher for more than 40 years).  And there is great anticipation (or dread) by parents and children and educators.  I know full-well that retailers there as well have been hawking “back-to school” wares for at least a month (I used to get upset while shopping as I was constantly being reminded that the new school year was soon beginning when my vacation had barely begun).  And yet…it is different here.

The day before the opening of school I turned on the radio and was serenaded with 2-3 hours(!) of Israeli songs all about the first day of school.  I met grandparents of first graders who, together with their grandchildren, attended a school program of creative, interactive activities a week before school opened, all meant to ease the children’s adjustment into first grade.  My neighbors actually enjoyed a complete Shabbat program with their grandchildren held in the school they would attend.

And then there was the crossing guard.

And fathers and mothers laughing and joking with their children as they accompanied them to school.

There was truly a special atmosphere in the street.

I find that there is a different attitude toward children here in Israel.  At times, more permissive; at times more demanding.  Every child is deemed to be your child for whom you feel responsible.  It is not uncommon to see a stranger reprimand a youngster for crossing the street carelessly or for not offering a seat on a bus to the elderly.  And people accept that.  We are, after all, “mishpacha.” And one cares for family.

Recently, a poll was taken among diplomats as to what they considered the best “posting,” i.e., the best country in the world in which to be placed.  From more than one hundred possible places, Israel was considered fourth in preference as a country in which to raise one’s family and enjoy life!  Despite the wars, despite the heightened security, despite the supposed difficult bureaucracy, the diplomats saw Israel as a wonderful place to live. And in explaining his vote, one diplomat stated that life for children here is absolutely wonderful.  The many places for their amusement, the learning opportunities in visiting historical sites and the excellent schools made this country his choice for a diplomatic post, he said.

I have no doubt that all people love their children and caring deeply for them is not the exclusive domain of any one culture.  But, for a nation who lost one and a half million children in the last generation and who witness all-too-many young men and women dying to protect their land in this generation, children are all the more precious.

So they start school with a celebration.  And they take the time off to bring their young ones to school instead of just sending them off.  And they well realize that the little boy who sits in the back may very well be in your son’s platoon and “have his back” in a future war.

It is a sobering thought, but well-worth mentioning, as we begin the school year and the New Year.  So we can all pray that these first graders (and their parents) will no longer have to think about wars.  Or about rockets or missiles or shelters.

We can pray that these little ones will be allowed to grow up to enjoy their childhood and that, in time, they will smile and laugh as they accompany their children back to school in a time of peace.

About the Author
Rabbi Neil Winkler, founding rabbi of the Young Israel of Fort Lee, is a musmach of R.I.E.T.S. and a graduate of Yeshiva College and Bernard Revel Graduate School. He served the Fort Lee, N.J. community for 36 years and taught Jewish Studies in the Moriah School of Englewood as Coordinator of Tanach studies. Rabbi Winkler is the author of “Bringing the Prophets to Life,” an overview of the Early Prophets.
Comments