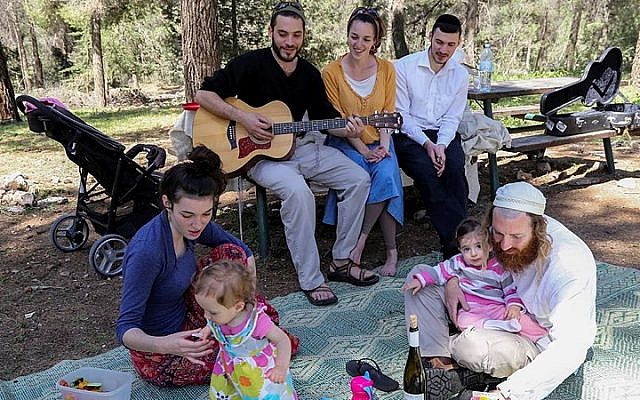 Israelis enjoy a picnic at the Gush Etzion forest in Gush Etzion on April 6, 2015, during the Passover vacation. (Photo credit: Gershon Elinson/Flash90)

Ok, the honeymoon between the young lovers is over. The relationship between the State of Israel and Diaspora Jewry, which had a rocky start, became a passionate love. As Israel matures and reaches its 70th year, a few voices are calling for a reevaluation of the connection. Severing the emotional ties would be a grave mistake for both communities.

Before World War II and the Holocaust, Zionism competed with other ideologies in the Jewish world. The early American Reform Movement rejected any form of Jewish Nationalism, “We consider ourselves no longer a nation, but a religious community, and therefore expect neither a return to Palestine … nor the restoration of any of the laws concerning the Jewish state.” The majority of Orthodox rabbis opposed any connection to what they saw as a secular movement rejecting Jewish tradition. Many Bundists, Communists, Secularists, and others saw no benefit in a return to the holy land. In 1937, Revisionist Zionist Zeev Jabotinsky pleaded with the Jews of Poland to immigrate to Palestine; his calls seem to a large extent fall on deaf ears. In just a few years’ time, both he and most of Polish Jewry would perish.

On the eve of Israel’s war of Independence 70 years ago, just over 600,000 Jews resided in mandatory Palestine – only 3% of the number of Jews in the world prior to the Holocaust. But with the creation of the State, the romance began. By the miraculous victory in 1967, a full-fledged love affair had taken hold. With perhaps the exception of a portion of the Haredi Orthodox and some other holdouts, Israel captured the Diaspora imagination of all major Jewish movements. As Jewish Agency Chairman, Natan Sharansky remarked “[the Six Day War and reunification of Jerusalem in 1967] supported by Jews around the world, ultimately brought down the Iron Curtain and enabled a million Jews to come home to Israel.” Israel took a central, if not the central, role in world Jewish life. Today, nearly 50% of all Jews live in the State of Israel. Hundreds of thousands visit (Birthright alone boasts of having brought more than 600,000 students and young adults to Israel.) Students come to learn, teens come for the summer, yeshiva and seminaries are full, the university programs and tours are bursting. This year, as the United States plans to fulfill its promise by moving the American Embassy from Tel Aviv to Jerusalem, Israeli hotels brace for the largest influx of tourists to ever reach our shores.

Yes, our relationship with the Palestinians needs a just closure and yes we need to work out our responsibility to refugees. Many are not as tolerant as I would like them to be nor are they in other countries for that matter. Not everyone agrees on every issue even when some of those are vital to human lives. I know. We all know the issues even if we disagree.  But this is the only Jewish State. And think about it for a minute: we have a country, we have a government, and we have a court system, each with Jews and non-Jewish holding important positions. We have celebrities of every religion and origin thriving in the Jewish homeland. Our creativity – from agriculture to water creation to hi-tech is the envy of much of the world.   We are in 12th place for Nobel prizes per/capita (the United States is in 16th place.) We have become the center of Torah scholarship, Judaic scholarship, Torah publications, and Hebrew language research. While there are many wonderful scholars, yeshivot, rabbinical seminaries, and academic programs for Judaica throughout the world, Israel is overflowing with every aspect of Jewish life.

Movement is also in the other direction. Some Israelis leave the country bringing with them the re-awoken Hebrew language, emissaries of the Jewish Agency spread throughout the world enhancing Diaspora Jewish life, and Israeli technology, television, movies, literature, music, Torah, and Jewish educational materials are impacting every Jewish community.

None of this means the negation of a vibrant Diaspora community. I believe in many ways, Israel and Israelis can learn from the various Jewish communities throughout the world. Jews throughout the world need to negotiate Jewish meaning as a minority in a majority host culture. That necessity has been the mother of innovations and a sense of global understanding and tolerance that Jewish Israelis don’t always appreciate. The creative energies of Diaspora Jewish leadership have built valuable institutions and stimulated theological and philosophical incites which have a different flavor to those born in the Israeli experience. We all have much to learn. And of course, the debt Israel owes to the support of the Diaspora Jewish communities is tremendous.

Yet, there are voices suggesting the time has come for a break. Israel, a country of nearly nine million souls doesn’t match up to some idealized utopian vision.

Some groups complain that the variety of shortcomings, perceived and real, have eclipsed the value of having a Jewish State. Pockets of antisemitism, also perceived and real, no longer warrant nationalism. Intersectionality means solidarity with the Palestinian cause even if that means an end to the Jewish State; Israel must either be forced to become the utopia they envision or they want nothing to do with it. “Not in my name – Israel doesn’t speak for or to me.” In a Back To The Future like move they declare “Only others deserve a nation but not to the Jews.” We live in a global world of which the nation-state is a relic – except in all the countries where it is still relevant. I know that these voices, as loud as they sometimes seem, do not represent the majority of American Jews or Americans even though more and more Europeans seem to be joining the choir. This gives me great pause. Imagine a Diaspora in the absence of a Jewish State. I can’t.

I am not suggesting that people can’t disagree with this or that policy or this or that action of the government. Disagreements are part of life. But the voices which see Israel as born in sin and demand a type of globalization of the State actually miss what is happening on the ground.

Let me tell you about the Israel I experienced over the Passover holiday.

My family and I were in Tel Aviv for part of the intermediate days of Passover. We visited the large park Ganei Yehoshua. First entering the park, we came across a group of mothers and young children. All were dressed in summer attire of tank tops and shorts munching on a variety of foods. Then we mixed with Haredi bikers and moved on to the lake to rent boats. Behind me in line was an Arab family discussing which type of boat to rent. We chose two paddle boats. As we were racing along in the manmade lake, we bumped into a multi-generational Ethiopian family. A man, who looked like the grandfather, sat laughing as his tweenage grandsons rammed their boat into ours. The father figure, also laughing, suggested the boys back up so that we could move forward. The scene in the park was festive – Jews and Arabs, Secular, Religious Zionist, and Haredi Jews all enjoying the bikes and boats, sun and games. I was struck by a family grilling some meat near where my son and I played catch with a Frisbee. A bare-headed older man was cooking food for what looked like his son and daughter-in-law wearing dress clothes symbolic of Haredim. Rich and poor, young and old, religious and secular and everything in between was represented. A few hundred or maybe a few thousand were frolicking in the park during the national vacation to celebrate Passover.

Let this sink in – 70 years after its founding in the wake of the fires of Auschwitz and the decimation of 6 million Jewish souls and the death of millions upon millions of others, Israel is flourishing. Not perfect, but flourishing. In a park, in the center of the country, Jews, Arabs, those of European origin, of North African origin, African origin, and guests can come together and celebrate life. A simple act yet one that couldn’t come about in much of the world. A full third of the Jewish people were destroyed, and make no mistake, like Job’s original children they can never be replaced; however, like a phoenix, the people have reemerged and bloomed.

Yes, Israel, like every other country, has problems. But breathe it in for a moment. A walk in the park that couldn’t be imagined for 2,000 years!

“When God brought about our return to Zion we were like dreamers.” Yes, this is like living in a 2,000-year-old dream. Come continue to fulfill the dream with us.