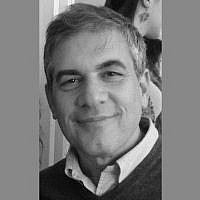 The Blogs
Eitan Cooper
Apply for a Blog
Advertisement
Please note that the posts on The Blogs are contributed by third parties. The opinions, facts and any media content in them are presented solely by the authors, and neither The Times of Israel nor its partners assume any responsibility for them. Please contact us in case of abuse. In case of abuse,
Report this post.

Neve Schechter’s Gallery in Tel Aviv is currently exhibiting “Sphere.” Several beautiful spherical paintings around the theme of the Omer Season by two talented Israeli artists are on display, but what evokes a powerful response are four large screens on which women count to 49 in eerily male voices, each time turning around. Secular Israeli women, grappling with the tradition of counting the Omer, are providing a poignant commentary on the exclusion of women’s voices in Jewish tradition. What does this commentary reflect?

Zionism was a revolutionary response to the crisis of Jewish identity in 19th century Europe. The framework of Jewish life that had assured survival for 1,800 years; a semi-autonomous faith community, regulated by Jewish Law and strong familial connections, could no longer swim against the powerful currents of liberal enlightenment, secular nationalism and socialism.

Zionism was not the only response, but it was the only successful one. More importantly, it created a new Jewish socio-political order: Almost overnight, the Jewish people ceased to be an ethnic faith community and became a nation-state. Even if they remained in their countries, most Jews accepted the powerful current of history. The long Exile was over.

Statehood is effective in sustaining and strengthening the Jewish people. Despite waves of pre-state Aliya, on the Friday afternoon of May 14 1948, when David Ben Gurion declared the Jewish State, only 5% of the Jews in the world lived here. Now fast-forward 70 years, today over 50% of the Jews in the world live in Israel, and Israel is the only major Jewish community in the world that is growing. Early in this Century, the number of Jews in Israel surpassed North American Jewry, and the gap widens from year to year.

Jews around the world who continue to sustain a communal religious life around the synagogue are worthy of our admiration and support, but if we examine North American Jewry, where the large majority of non-Israeli Jews live, we can observe a profound shift in Jewish engagement. Today, US Jewry’s largest annual organized activity is the AIPAC Conference. In AIPAC, members of all denominations work together, while secular Jews, non-Jewish spouses and friends are full partners. It makes no difference what they practice privately. There is also an opposition: J-Street, NIF, and even the unwitting Natalie Portman promote their Jewish-Zionist values. In the early 21st Century, for the majority of Jews, Judaism finds its primary expression in the political arena rather than in the synagogue.

Even as we marvel at Israel’s success in transforming Jewish identity, new trends have emerged to challenge it. The 19th century crisis of Jewish identity that engendered the Zionist idea and the 20th century historical exigencies that accompanied the establishment of the State, have given way to new global cultural and political currents that are breaking the familial bonds of ethnic communities and challenge the capacity of the nation state to inspire loyalty and unity. Some countries have reacted to these currents by choosing populist, authoritarian-style leaders who promote nativist policies.

This extremist current challenges the future of the Jews as a nation-state. Raising inclusion above all other values, liberal-universalist Jewish voices are finding it more and more difficult to include in their Jewish identity what they perceive to be the particularistic nationalism of Israel, and in some cases have even begun cooperating with its enemies. At the same time, an increasingly fundamentalist Orthodoxy has found common cause with authoritarian, ultranationalist forces in Europe and the US.

Extremists successfully employ the power of mainstream and social media. Will the Center be up to the task? When and where will compassionate, moderate voices emerge to answer them? What will be required from them to inspire confidence?

In another 70 years, history will judge whether we were up to the challenge of building a Jewish and liberal-democratic state that fuses the core elements of Jewish culture (Hebrew language and literature, the Jewish calendar, family and community) with liberal democracy (civil rights, tolerance and freedom of conscience, majority rule and respect for law).

This brings me back to the exhibit. In the past four years, many Israeli artists, the vast majority secular, have, through their contact with Neve Schechter, brought their art into a dialogue with their heritage. The Schechter Institutes are providing artists and educators, community workers and professionals a place where they can grow through their Jewish identities, facilitating a debate within their souls that reflects our current global dilemma, looking neither left (towards inclusion) nor right (towards exclusion), but forward, with our amazing treasure-trove of Jewish literature and history as a guide to the future.

Eitan Cooper is the Executive Vice President and Chief Operating Officer of The Schechter Institutes.

About the Author
Eitan Cooper is the Executive Vice President and Chief Operating Officer of the Schechter Institutes.
Comments