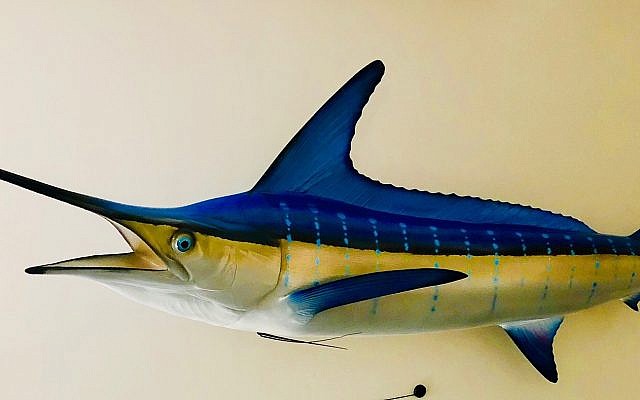 About 15 years ago, my husband and I took our kids on a cruise down the Pacific coast. One of the final stops was Cabo San Lucas, Mexico.

My husband considered taking our sons on a deep sea fishing expedition in Cabo. But by the time he went to sign up for the cruise line’s trip, all the slots were full.

So we all disembarked at the port and began wandering around. Within five minutes of following the girls and me through the souvenier stands, my husband decided to find his own fishing expedition. The boys eagerly went with him.

A few hours later they were back, seasick, sunburned, and shaken.

Turns out they’d hired a “freelance” boat captain, whose boat conked out at sea.

He had no phone to call for help, no water on board, no life jackets.

While he was trying to restart the boat, our youngest son landed a gigantic marlin!

For many minutes, the marlin was in charge, pulling the boat further and further out in the open sea.

My husband and the other kids managed to drag in the big fish. Eventually the “captain” restarted the boat and headed for shore. They sold the 140 lb. fish to a vendor, and took photos so that a replica could be made. Then they staggered around looking for us.

By evening the guys had recovered and were laughing about their fish tale. My husband characterized the event as “a bad idea, poorly executed.”

Actually, it had started out as a good idea. It was the execution of the idea where everything fell apart.  I was horrified at how close they’d come to a catastrophe, mighty relieved that seasickness and sunburn were the worst of it.

A replica of that fish hangs in our basement, a souvenir of our family’s greatest fish tale. And a cautionary reminder about what can happen when the execution of an idea comes up short.

I thought about that story this week while working my way through a mountain of articles written since the Knesset passed the Nation-State law.

Initially, I thought it was a benign move, a statement of the obvious. Of course, Israel is the nation state of the Jewish people! Of course, Hatikvah! Of course, the Jewish holidays, flag, symbols!

But the more I read, the better I understood compelling reasons why this law, as currently written, is problematic. It does not ensure equality for minorities as expressed in Israel’s Declaration of Independence.

In a Times of Israel op-ed, Yedidia Stern, vice president for research at the Israel Democracy Institute and a professor of law at Bar-Ilan University wrote:

The one-sided Nation-State Law contradicts what Israel promised itself and the world in the Declaration of Independence, the founding document of the State of Israel. It stipulated that Israel is the national home of the Jews, but at the same time promised that the state “will ensure complete equality of social and political rights to all its inhabitants irrespective of religion, race, or sex.” In 1948, when the mere existence of Israel was under question and attacked on all sides, Israel managed to take an honorable and moral position without diminishing our national stature. Those who oppose the Nation-State Law do so because they are committed to the ideals found in the Declaration of Independence.

When a patriotic Israeli scholar and champion of democracy sounds a warning on this law, it should be heeded.

That concern was shared by Likud member Benny Begin (son of former Prime Minister Menachem Begin) who abstained from voting. He said: “This is not a decision I expected from the Likud leadership.”

President Reuven Rivlin, a fierce critic of an earlier version of the bill, wrote a letter to the Knesset opposing the clause that would enable the creation of segregated communities (the clause was removed).

Now we are learning that Tzipi Livni, leader of the opposition, repeatedly urged that the phrase “equality for all its citizens” be added to the law, so that it would align with the commitment Israel’s founders made in the Declaration of Independence. That would have enabled most members of Knesset to vote in favor of the law, a ringing endorsement of the founders vision.

But this change was rejected by Likud. The law passed by a narrow margin, splitting along partisan lines.

The Times of Israel’s David Horovitz noted, “In the 10 days since the law was passed, the controversy surrounding it, rather than dissipating fairly quickly, as most controversies do, has intensified.”

On Monday, eight former police commissioners called for the law to be changed to assure equality for minorities.

The law is tearing Israel’s delicate social fabric. The Druze, loyal citizens of Israel who serve proudly in the Israeli Defense Forces feel excluded by the law. Shady Zidan is the second Druze army officer to quit in protest, writing on his Facebook page:

The law will generate controversy here in the Diaspora too.

As a Jew living in Diaspora, I am reflexively deferential to the national security decisions Israel’s government makes.

I am speaking out now because this law is not such a case.

The law, as currently written, is a setback that will undermine the work of the Diaspora’s most committed Zionists — people like me who spend our days speaking, teaching, writing, advocating, and lobbying on behalf of our beloved Israel.

So I am speaking out of concern and love.

While defenders of the bill assure us that individual protections are already written into the Basic Law on Human Dignity and Liberty, that won’t help. The missing commitment to equality in the Nation-State law, along with vague language open to wide interpretation, will leave an odor that cannot be perfumed away.

As well, the Nation-State law will be a potent weapon in the hands of anti-Israel campus groups such as Students for Justice in Palestine. What Jewish student is going to crawl down the rabbit hole of dissecting Israel’s Basic Laws? Once the conversation veers in this direction, it’s over.

Off campus — in churches and schools, in the halls of local, state, and federal government –American support for Israel is strong, but it can never be taken for granted. A sense of shared values strengthens it. A disregard for democratic norms weakens it.

This is the landscape we are dealing with. Do the members of Knesset who voted for this law in its current form understand the impact of their actions here?

Nonetheless, I will not give up on this place I love, even when there are profound differences.

I hope that the Knesset will change the Nation-State law to align with the noble values articulated by Israel’s founders.

Because as it is presently written, the Nation-State law is the 140 lb. marlin dragging Israel in the wrong direction.