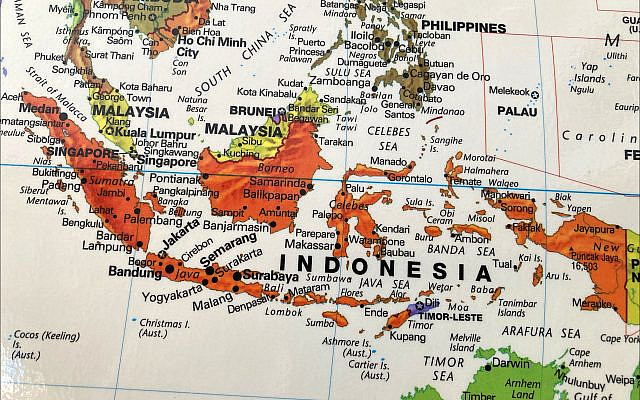 Indonesia consists of more than 17,500 islands, though 56% of the country's population is squeezed onto the island of Java. (Larry Luxner)

As Israel rushes to establish diplomatic ties with its Arab adversaries, the business sector isn’t sitting around waiting for Indonesia, the world’s largest Muslim nation, to join the party.

On Jan. 3, the Jerusalem-based Israel-Asia Center will kick off its Israel-Indonesia Futures program in partnership with Start-Up Nation Central. The online collaboration, which aims to connect the future leaders of both countries, focuses on five specific challenges that have been proposed by Israeli and Indonesian multinationals, startups and social enterprises:

“We have recruited teams of established and emerging Israeli and Indonesian leaders to each challenge, bringing together the right combination of experience, know-how and networks to work together to develop a solution to their assigned challenge,” said Rebecca Zeffert, co-founder and executive director of the Israel-Asia Center. 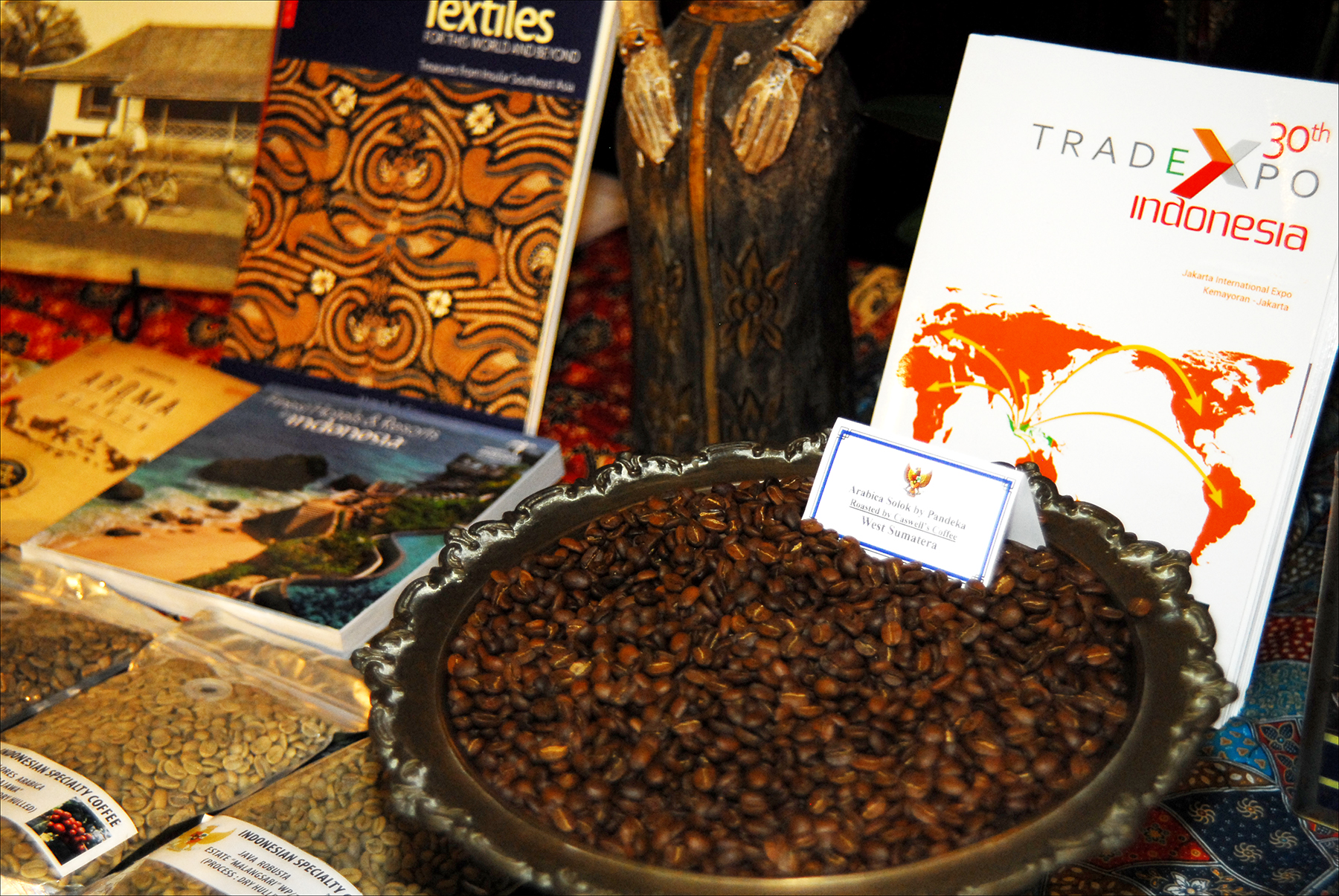 Coffee beans and books about Indonesia are display at an April 2015 coffee cupping event hosted by the Embassy of Indonesia in Washington. (Larry Luxner)

It’s no surprise Israelis are so eager to do business with their Indonesian counterparts.

With nearly 275 million inhabitants, Indonesia is far more populous than the combined populations of all six Arab countries — Bahrain, Egypt, Jordan, Morocco, Sudan and the United Arab Emirates — that have already signed or announced peace treaties with Israel.

Spread across more than 17,500 islands, Indonesia is also the world’s fourth-biggest country in population after China, India and the United States. And within 10 years, it’ll rank as the world’s fifth most important economy.

Bilateral trade already amounts to $500 million a year — much of it through third countries. Furthermore, an Israel-Indonesia Chamber of Commerce has been active since 2009, said the chamber’s vice-chairman, Emanuel Shahaf, who’s traveled to Jakarta on business so many times he’s lost count.

“Indonesia represents a huge potential which is not being realized—in agriculture, medicine and many other fields we’re really good at,” said Shahaf. “The two countries have very complementary economies, in the sense that all the things we have, they really need. They’d benefit a lot from open relations.”

Apparently, it’s not such a radical idea in this country, 88% of whose inhabitants are Muslim.

A discreet but growing interest in Israel ties

According to an online poll by influential politician Diaz Hendropriyono — chair of the Indonesian Justice & Unity Party — on whether Indonesia should establish diplomatic relations with Israel, 51% of respondents said yes, while 49% said no. 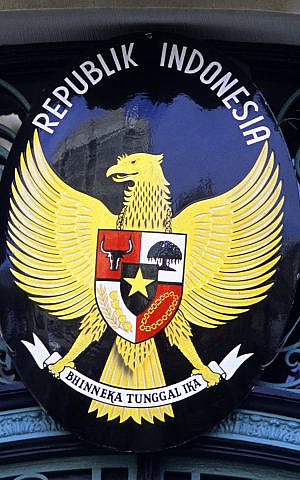 But the country’s leaders have long officially dismissed the idea, thereby allowing them to avoid confrontations with radical Islamic extremist movements at home.

Shortly after the Jerusalem Post, Israel Army Radio and other news sources suggested that Indonesia might be the next country to open relations with the Jewish state, Foreign Minister Retno Marsudi shot down the idea, telling the Jakarta Post on Dec. 15 that Indonesia has “no intention to open diplomatic ties with Israel,” and that it “will continue to exercise support for Palestinian independence based on the two-state solution.”

Even so, Emirati, Bahraini, Sudanese and Moroccan officials all denied the existence of secret negotiations with Israel until their respective agreements with the Jewish state were made public. The same calculus could be going on in Jakarta as well, especially if the White House is leaning on Indonesian officials to recognize Israel — just as it did with the other countries — during the few weeks before Joe Biden replaces Donald Trump as president.

Shahaf said that since the signing of the Abraham Accords between Israel and the Persian Gulf states of Bahrain and the UAE, he’s seen a jump in interest from Indonesian companies regarding cooperation with Israel.

“There appears to be pressure from the U.S. administration for Muslim countries to join the bandwagon,” said Shahaf, noting that “Morocco had one thing they wanted very dearly, and that was [U.S. recognition of] Spanish Sahara. There’s always something which can be leveraged, though all things considered, Indonesia is an unlikely country to give in to such pressure unless it’s in a weak spot, which it may be now because of COVID.”

One development that could really nudge Indonesia to open up to the Jewish state would be diplomatic recognition of Israel by the Saudi government.

“With the announcement of normalization of ties between the UAE and Israel, we [at the Israel-Asia Center] saw an almost immediate shift in openness from Indonesia,” said Zeffert. “If Saudi Arabia establishes diplomatic ties with Israel, that would change the conversation entirely in Indonesia.” 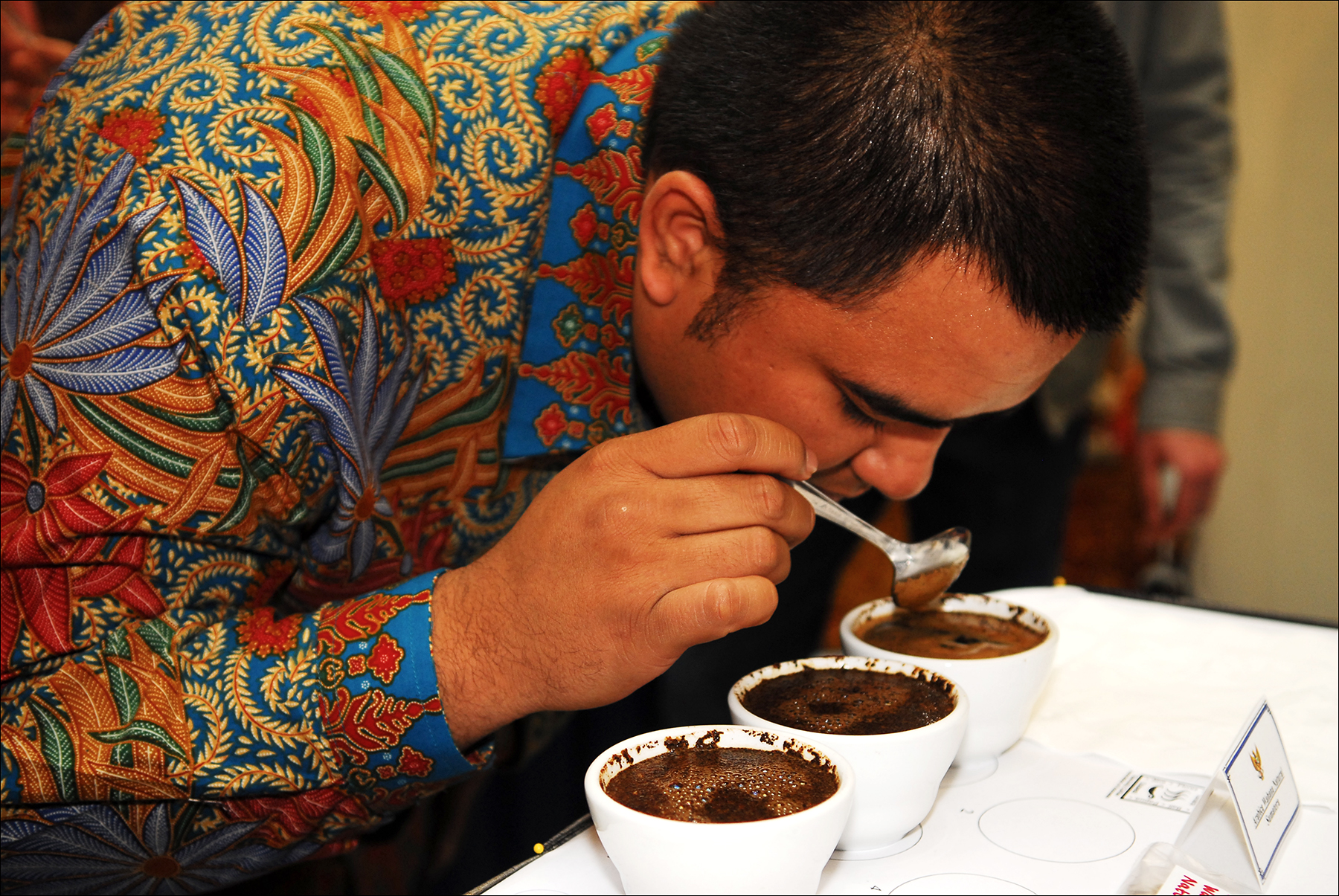 Even so, Zeffert doesn’t expect to see the inauguration of an Israeli Embassy in Jakarta anytime soon. More likely, she said, is the gradual warming of relations over time, and more openness by Indonesia to business ties.

Gilad Majerowicz is a partner at Herzog Fox & Neeman, Israel’s largest law firm. As co-head of HFN’s Asia practice, he sees “huge opportunities” for Israeli companies in Indonesia once bilateral ties are established — specifically in agrotechnology, healthcare and cybersecurity.

“I have met with Indonesian lawyers at conferences, and at least one firm has reached out to me recently,” he said. “There has been business between the two countries for years now, below the radar — the same way there was with the UAE. In that respect, normalization would make those relations more legitimate and less discreet.”

In addition, Indonesia’s participation in the new Regional Comprehensive Economic Partnership (RCEP) signed on Nov. 15 “will make Indonesia a very lucrative trade zone for Israeli companies looking to expand their market, opening up opportunities that were impossible only a couple of years ago,” said Majerowicz.

The RCEP is a massive free-trade accord linking the economies of five regional partners — Australia, China, Japan, New Zealand and South Korea — with the 10 members of the Association of Southeast Nations (ASEAN): Indonesia plus Brunei, Cambodia, Laos, Malaysia, Myanmar, Philippines, Singapore, Thailand and Vietnam. 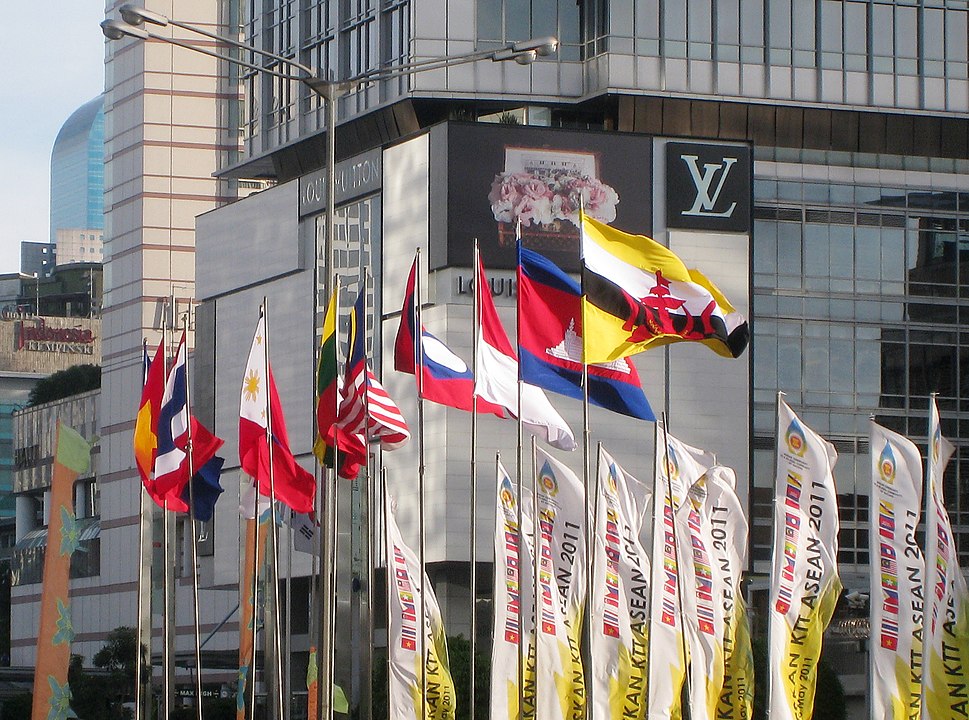 “The fact that Indonesia has such a young population is also a big advantage,” he said. “We have to think strategically. More people have access to technology and multimedia. These people have fewer perceptions of the old world, where Israel was the bad guy.”

The Israel-Asia Center says its alumni have secured at least $200 million of investment in the Israeli economy since its founding — with most of that amount in the last three years alone. Since 2011, the nonprofit has been training young leaders from Israel and across Asia to become leaders through its Israel-Asia Leaders Fellowship, with graduates making significant contributions to Israel-Asia relations.

For the time being, Israel-Indonesia Futures is 100% online. The program consists of interactive seminars and workshops, with high-profile guest speakers from both countries that will explore each other’s economies and cultures. Participants will also explore existing bilateral trade, shifting markets and the potential for growth in trade and investment; creative and innovative thinking, and leadership in times of crisis and how to recognize silver linings.

“The fact they are generating so much interest from Indonesia is fantastic,” said Majerowicz, noting that the Israel-Asia Center has already trained nearly 100 young leaders from 14 countries including Indonesia and Malaysia — neither of which have diplomatic ties with Israel. Participants have also come from China, Hong Kong, Taiwan, Japan, South Korea, Singapore, Vietnam, India, Mongolia, Nepal and the Philippines.

“Those young people return to their countries as ambassadors for Israel because they were exposed to the good side of this country,” he said. “And they continue to send the right messages because they lived here.”