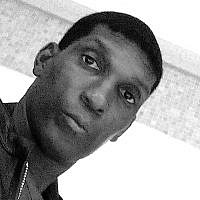 The Blogs
Daniel Moshe Johnson
Apply for a Blog
Advertisement
Please note that the posts on The Blogs are contributed by third parties. The opinions, facts and any media content in them are presented solely by the authors, and neither The Times of Israel nor its partners assume any responsibility for them. Please contact us in case of abuse. In case of abuse,
Report this post.

As Yisrael marks its 70th year of independence, amidst so much opposition in the world, I’m still hopeful that ultimate peace will spread, and the minds of those confused will embrace, the only State of true freedom in the entire Middle East.

In my opinion, statehood in a secular reality can not fully grasp the aggadah, for if it did, then domestic and international dealings would differ, and we would resemble those folks written about, o so long ago. I’m open to different levels of Jewish expressions in a free will capacity, even those not explicit to Orthodoxy or even Conservatism.

Wisdom is a step process, as humans time brings one, we hope at least, brings one eventually to gates of wisdom.

Chokmat Hanistar’ (the secret of the Hidden One) can be revealed in each, and magnified to the world, thus, bringing about Tikkun Olam-return to world peace.

Return to what some may ask, was there even a time the earth was at peace?

Return to the former estate,

The Mishna teaches that Yob was asked by Hashem, a very deep question, a peon, being asked by the source of all sources, a question that scientist suggest to truly comprehend.

No one can say for certain, one thing that is forvcertain, many of us  project our opinions of what wisdom is upon others second to second, with the hopes of creating and sustaining our own ideas of reality. They say that reality in truth is found inwardly, if this is so, what is reality and what is inwardly?

Reality, according to the five senses, is based in the carnal perception of the appearing and reappearing material matter, yet measuring the movement of material objects at distances remains a mystery.

So, when we say seventy years in a historical way that our Jewish history calendar relates as 5778, do we really understand this.

I don’t think so, and I’ll tell you why.

This is my first blog on The Times, I’ve followed the Times for years, and I respect every aspect of Jewish and Israeli expression and dedication to the exchange of events and opinions that define, bring to light, edify and relate to our existence in old Judea with other nations as visitors and or conquerors.

In my writing you will often see me refer to Israel as Judea, I’m a realist, and I’m a firm believer that history can not be passed over as outdated.

Judea was once a Kingdom, Israel was a part of that kingdom and there is a reason why in the Hebrew alphabet, that alef comes before bet, while both require MEM.

In order to exist, MEM is essential, so A proceeds B, if A is removed by X, Y and Z over time, does not override, that A is still A, be it in a smaller form, a non respected form, an apprehended and new constructed form in a different geographical makeup form, A is still A, despite B, X, Y and Z, changing the preexistence of A.

Judea can never be Palestina, nor can Jerusalem be Aelian Capitolina, unless we accept the thievery of Rome as valid and that Emperor Hadrian was a good Pope/Emperor, and that the Assagoths, the Visagoths, Alaric, Byzantines, Philistines and others, were also good folks who were all Jews just buying Judea and borrowing its gold and royal diadems.

To truly recreate a thing back to its origin, is to do so in its full capacity, because, as 70 years of history has shown us, an error can become the pretext to nonexistent existentials, that can become a monster, that can take the premise of a once concrete fact, and turn it into global platform of hatred.

This is what Israel has been made the benefactor of, because concrete realities that relate to our history, were not interjected accordingly nor properly, in the entire Middle Eastern narrative.

Great Britain organized what is today the Saudi empire, UAE etc…prior, tribal wars resulted in millions of lives lost, until Britain, in a sense, domesticated the area. The descendants of King Saul rule today in what is identified as a Kingdom.

Should have Judea been reinstated as such, and its borders reflect at least 70 % of the original borders, which would have extended up through most of all Iraq up into Iran, and as far south as Ethiopia and all of Egypt and the Sinai, for Queen Markaba, was the Queen of all of Africa and Ethiopia, which was the name of the entire region back then. The Mediterranean Sea, prior to Greek conquering, was called the Ethiopian Sea.

History is important, and revisiting ancient land deeds and territories, the recreation of a land ideal is a big project, that we have to be realistic about, and be honest about.

Judea and Samaria, there is no question, and Israel today, does not come close to what should have been mandated and put into reality. The vacuum of error, has left a 70 year old error is linqur and be pacified with bandages that have created a resistance based in no foundation.

The Greek Patriarchiate owns 60% of what has been identified as the old city of Jerusalem, including the Supreme Court grounds and the PM and Presidents residences.

Instead of imploding armed resistance, the Patriarch does business diplomatically, and thus, Israel doesn’t feel threatened nor does the Church, as both parties respect each others existence and presence, despite Judea and ancient Jewish land, being in the hands of non Jews, by default, wars or purchasing while Jews were in exile or forced into slavery positions.

Whatever the case, there is a deep respect.

In closing, I will be presenting blogs out of context, as my style of writing differs from a script or format that tries to force an opinions, I relate truth based in historical records and I will also be proposing suggestions, that are open to your input and dialogues.

About the Author
Daniel Moshe Johnson is a former international pro athlete, an American/Israeli, former player with Hapoel Tel Aviv Bet Eleazar BC in Tel Aviv. Johnson has played all over the world. Daniel Moshe is an advocate for Tzion/ The State of Israel. Johnson is the father of two young adults, Don Daniel Robert Saperstein Johnson and Wendy Rilda Daniela Johnson, both Israeli-Canadians. Johnson is a Mishna scholar, student of Kabbalah and has aspirations to get involved in Israeli politics directly.
Related Topics
Related Posts
Comments