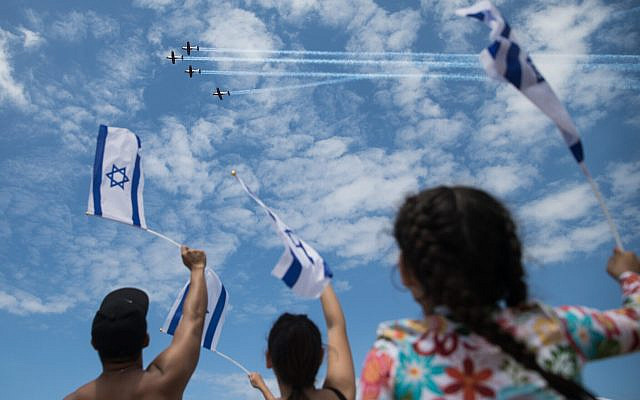 We are at a very poignant time in the Jewish calendar. With Passover and Holocaust Remembrance Day behind us, we now look towards Yom HaZikaron (Memorial Day for Israel’s fallen soldiers and victims of terror) and Yom Ha’Atzmaut (Israel Independence Day), two of the most meaningful and reflective days for Israelis. I wonder, though, and often worry how relevant they are to my fellow Jews around the world.

Anyone who has experienced this time period in Israel understands the emotional power these holidays possess and how incredibly different they are from the American equivalents. As the sun sets on Yom HaZikaron eve and the first siren blares, a heavy somberness blankets the entire country for the ensuing 24 hours until Yom Ha’Atzmaut arrives, when the country suddenly and seamlessly bursts into celebration.

Israel has reached a remarkable milestone – 74 years of independence. Most Israelis will undoubtedly be celebrating their beloved home in typical spirited fashion. But this commemoration is not, and should not be, simply for Israelis. These holidays reflect unique moments in the history of the Jewish people, signifying not only hardship and painful sacrifice, but also the resilience and eternal nature of this people.

To my dismay, however, I sense that more and more American Jews, especially university-age students, fail to recognize, let alone celebrate or commemorate, these significant holidays. Are we witnessing a growing population of American Jews who hold no concern for Israel whatsoever? Is Israel still relevant to them at all?

The 21st century began with an apparent decrease in support for Israel among America’s Jewish youth. The constant and obsessive criticism of Israel on college campuses across the country was not being met with equally passionate support for Israel. In 2010, a group of Jewish philanthropists hired Republican pollster Frank Luntz to examine the reason why Jewish college students seemed to be detached from, or in some cases even opposed to, Israel. In “The Failure of the American Jewish Establishment,” Peter Beinart, an American Jewish columnist, journalist, and political commentator, summed up Luntz’s study in two simple sentences: “The philanthropists wanted to know what Jewish students thought about Israel. Luntz found that they mostly didn’t.”

Moreover, just last month the American Jewish Committee (AJC) released a study concluding that one in every four Jewish American millennials hides their Jewish identity and distances themself from Israel, with a majority of those polled noting that the anti-Israel climate on college campuses has forced them to make these rash decisions. This report, among so many others, validates the notion that young Jews are significantly less likely to care about Israel, or even to follow current events about Israel, than the preceding generations.

Older American Jews, including those who lived in the pre-state era, as well as those who were imbued with immense pride after the miraculous victory in June 1967, had a strong personal connection to the Jewish state. They had witnessed, and in some cases participated in, the numerous wars of attempted annihilation against Israel, and their connection to the State was visceral and directly tied to its very existence. While international support for Israel was generally minimal, American Jews could be counted on for their moral and financial support. To those generations, Israel was the underdog, struggling just to survive, and it had become a central part of their Jewish identity.

In recent decades, however, many American Jews lack that type of experience and perspective. One reason is that Israel has become a strong, independent, and thriving country, technologically advanced, and generally able to defend itself. It is also the seemingly endless bashing of Israel in the United Nations, on college campuses, in the halls of Congress by some virulently anti-Israel legislators, and, sadly, by a growing number of uninformed and misguided Jewish leaders and groups. I believe this has caused many young Diaspora Jews to disengage from Israel at an alarming rate, or even to advocate against her interests, rather than be proud of her strengths and achievements.

What concerns me the most about this trend is that Israel, in truth, is relevant to the worldwide Jewish community now more than ever. Consider the Ukrainian situation, for one instance. At the onset of the Russian invasion this past February, Israel welcomed Jewish Ukrainian refugees with open arms, taking significant measures to expedite the Aliyah process for those who sought a safe haven and ensure a smooth absorption into society. Israel is and always will be the only country to accept the Jewish people unconditionally and offer refuge in times of crisis and persecution, which repeatedly proves necessary, as so many in the world seek our destruction.

Altogether, this should serve as a “wake-up” call to all of us who claim to support the State of Israel. Jewish leaders, educators, and advocates of the State of Israel must ensure that younger generations of Jews cultivate a connection and sense of belonging to the Jewish state. Earlier studies have shown that three things drive Diaspora, and especially American, Jews closer to Israel: Jewish day school education, Jewish summer camp experiences, and at least one trip to Israel (such as through Birthright). We must redouble our efforts in these areas so as to nurture in young Diaspora Jews a love and connection for the country, while also recognizing that difficult conversations about Israel’s role in the world and its ongoing conflict with the Palestinians cannot be avoided with this generation, as it may have been with their parents and grandparents whose support for Israel was total.

Initiatives that bring Israelis to interact with Diaspora Jewish communities, such as The Jewish Agency for Israel shlichim who are sent to college campuses, summer camps, and community centers for the purpose of building living bridges between the two communities should be increased with an emphasis placed on Judaism and Jewish content. Additionally, efforts to encourage Diaspora Jewish youth to have hands-on experiences in Israel must be strengthened. These educational trips to Israel, during which students encounter, firsthand, the uniqueness of their spiritual homeland and are explicitly offered meaningful Jewish-oriented programming, are critical to creating long-lasting ties to the Jewish state and help prepare students to combat the anti-Israel bias that they will encounter in college. If Israel is to be relevant to this younger generation of Diaspora Jews, those of us in the pro-Israel community must help make it happen – it will not happen on its own.

Next year, may Israel’s 75th birthday be one that sees many more Diaspora Jews view Israel as not only relevant to their lives, but also a core component of their Jewish identity.