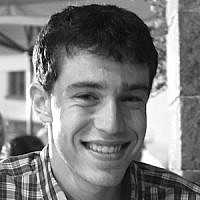 The Blogs
David Schonfeld
Apply for a Blog
Advertisement
Please note that the posts on The Blogs are contributed by third parties. The opinions, facts and any media content in them are presented solely by the authors, and neither The Times of Israel nor its partners assume any responsibility for them. Please contact us in case of abuse. In case of abuse,
Report this post.

This past winter, I was fortunate enough to go on a trip to Israel with Birthright. I had been to Israel a few times before, with my family and with my high school, but it was still amazing to come to Israel again and live there for a few days as an adult. As Jews, we are extremely fortunate that Israel exists as a country for all Jews. It is incredible to come to Israel and feel connected. The majority of Israel is Jewish so the culture and media are immersed with Jewish culture. Even most of the restaurants are kosher! So many people are Jewish that it feels so comfortable to be there and belong. When I think about Israel, I think about how my life would have been different if Israel had been established before the Holocaust. Israel could have opened its doors wide to all of the Eastern European Jews as a temporary or permanent refuge and many of the Jews would have been saved. My grandfather and only part of his family survived the Holocaust. What would have happened if the rest of my family had lived?

After a couple of months, my grandfather and his family were forced back with the other Munkacs Jews and all were forced into cattle cars to be herded to Auschwitz-Birkenau. Once they arrived, Dr. Mengele separated them into two lines, based on who would or who would not be able to work. My great-grandfather ran ahead and heard that he should do the following and so he did: He lied and told the Nazis that my grandfather, who was tall for his age, was 16 years old, not 9. He told them that his wife was a nurse. And he also gave baby Solomon to his mother-in-law to hold. The Nazis told her and the baby to move to the line on the right, while other members of his family were to stay on the left side. Later, they learned that those who were sent to the right were murdered in the gas chambers.

My grandfather spent two weeks in Auschwitz. The Nazis split up the men and the women in the family. My grandfather, his father, uncles and his cousin Eugen always stayed together. Germans starved the Jews and the other prisoners and forced them to dig up holes and then fill them with dirt over and over again.

After Auschwitz, my grandfather and his family were sent to a different German concentration camp at the Warsaw ghetto. This was after the Warsaw ghetto uprising, the Jews’ stand against the Nazis, had failed. The purpose of this camp was to retrieve all of the useful material from the ghetto’s remains. In August 1944, since the Russian army was approaching Warsaw, the Nazis forced my family members and the rest of the prisoners of the Warsaw camp into a death march. They forced them to march for three days with minimal food and no water.

Eventually, my family reached cattle cars that brought them to Dachau, another concentration camp. Here, they were allowed to shower and given new clothes. My grandfather believed that the Nazis did this because they wanted the prisoners to give beneficial testimonies about the Nazis if the allies won the war.

After only a few days, my grandfather and his family were sent to another concentration camp. This one was called Waldager Muhldorf and was much smaller. It was here where most prisoners were forced to help the Germans create an underground airplane factory. I remember hearing over the years from my family that if the Germans had finished building this factory, perhaps they could have won the war. My grandfather was first given the job of a potato peeler, which he could use to sneak some food back to his family. His father was working as a doctor in the camp hospital. In a few weeks, my great-grandfather was able to get my grandfather to work for him as his assistant so that he could always protect and keep a careful watch on him.

On May 2, 1944, all of the Nazi guards evacuated the camp and the American army arrived. My family was freed. After a year of living in Prague after the Holocaust, my family decided to move to the United States, to St. Louis.

Thinking of the Holocaust terrifies me. There were so many chances for my family to have died, and yet they survived. If my family had not lived, I would not have even existed. I am so lucky that my family survived.

It was a strange feeling walking through Yad Vashem, Israel’s Holocaust museum, with my Taglit-Birthright trip friends. It was sad, yet important to hear about the history and stories of the Holocaust. As the tour guide told us stories and the history of the Holocaust, everything felt more real because my family lived through it.

Birthright provided my fellow travelers and me many wonderful experiences around Israel. We hiked in the Golan, explored the streets of Tel Aviv, and visited the ancient city of Jerusalem and the Western Wall. It was amazing to experience so many different places in Israel and it made me realize, once again, how privileged we are to have Israel. I only wish all of my family had the opportunity to connect with Israel the way that I have.

About the Author
David Schonfeld is a sophomore at Washington University in St. Louis majoring in computer science.
Related Topics
Related Posts
Comments