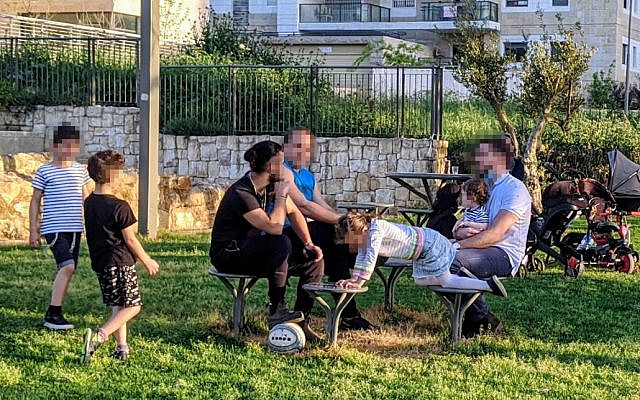 Despite the lockdown, adults gather in a Jerusalem Park, 21 April 2020. Photo by Arieh Kovler

Is it currently legal in Israel to smoke outdoors? What about eat a falafel?

Nobody knows. Because the Israeli government’s communications to the public are terrible.

Israel acted swiftly to stop the spread of the coronavirus, announcing travel bans, closures and lockdowns at points when those measures seemed excessive. These actions helped prevent a crisis on the scale of Italy, Spain, France, the UK and the USA.

There are serious concerns about the speed of reopening. The restrictions were imposed quickly because they had to be. The relaxation is trickier, and we have no idea if each decision is safe for about two weeks, when any new infections would begin to show up in testing.

But the speed isn’t the only problem. It’s also that nobody knows what the rules actually are.

For the first month, Israelis faced a familiar pattern. In the evening, on all channels, Outgoing Prime Minister Netanyahu made a long speech to the nation where he announced new restrictions to fight the virus. Only later were these restrictions actually debated in Cabinet, where they would inevitably be changed a bit from what everyone was told on TV before becoming Emergency Regulations.

The Director-General of the Health Ministry would give regular press briefings discussing his plans for what new restrictions might be next, and leaks of different plans from government departments, reported by the media as legitimate news but adding to the public confusion.

And then, after three days, the whole cycle would start again, sometimes before the last set of restrictions even came into force.

Now Israel is lifting restrictions, the same is true. There are no more regular Netanyahu speeches to the nation, but instead every ministry leaks its own plan to reopen things under its purview, leading to more confusing and premature media reports. The Health Ministry, which is more cautious about lifting lockdowns, is doing its own briefing and again, its guidance is stricter than the newly-relaxed laws.

Who can keep up? Israelis can’t leave the house, except for a 100-metre walk. Oh, but if it’s for exercise and not refreshment, suddenly a 500-metre walk is OK. And if it’s for going to a shop then there’s no distance restriction at all. Ah, except as of today the 500-metre rule for exercise is lifted — didn’t you hear?

Masks are another example. Masks have been required in public for more than a week already, but only indoors or in a gathering outdoors. Then sports games were exempted. Now, as of today, Israelis also have to wear a mask whenever they are in any place that’s not a private home.

But what does that mean in practice? Are smokers still allowed to smoke cigarettes outside? That’s a dangerous activity that probably spreads the disease. And what about eating? Takeaway food was also just permitted to reopen, and the falafel places are back in business. But obviously eating both spreads the virus and can’t be done through a mask!

More reopenings, relaxations and rules are coming on Sunday — unless the government changes its mind about them, which will happen by Friday. So whatever Monday’s rules are, by the time anyone knows them they’ll have changed.

People are genuinely confused about what they are and aren’t allowed to do. In the absence of simple, clear messages  and faced with a mass of technical minutiae, the public will break the rules through misunderstanding and through wilful defiance of seemingly-arbitrary diktats.

If citizens are expected to follow the rules, they need to know what the rules are.

That means simpler rules and clearer messages. The 100m/500m/no limit distance rule was bad because it was confusing, inconsistent and arbitrary.

“Wear a mask” is a simple rule but it’s not clear enough for people to understand.

“Wear a mask that covers your nose and mouth. Don’t take it off to smoke, eat or talk on the phone” is better. Not everyone will follow it, but at least people will know what they’re supposed to do.

Covid-19 will be with us for years. The upcoming relaxed rules could need to be tightened, relaxed and tightened again. The Israeli government has failed to communicate these changing rules simply and clearly so far. It’s going to have to get better if it wants to ensure the widespread compliance needed to keep the public safe.