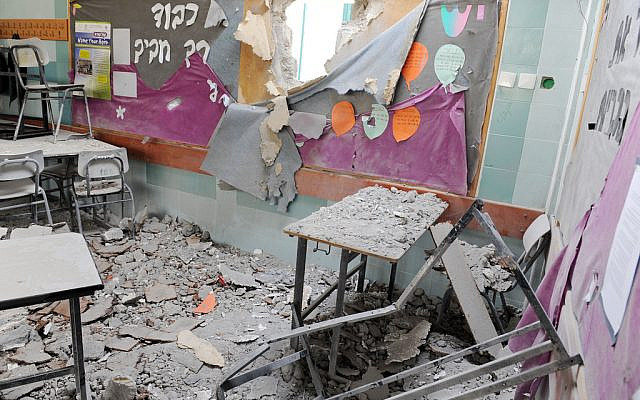 A kindergarten in Beersheva, Israel, in December 2008, after a rocket attack from Gaza (credit: Avi Ohayon / Wikimedia Commons).

We all know the expression “guns don’t kill, people do.” If a gun sat in a locked cabinet, it would kill no one. But if a person picked it up, pointed it at someone else, and pulled the trigger, that someone would likely die. It is the person who pulled to the trigger who is the killer, not the gun.

It’s the same with Gaza. Israel has a powerful army, the Israel Defense Forces, but when unprovoked, the IDF never attacks Gaza. It attacks Gaza only when Hamas or other Gaza terrorists attack Israel, typically by raining rockets on its cities.

Attacking a country, any country, will cause that country’s army to respond, just as predictably as pulling a trigger on a gun will cause the gun to fire.

When we don’t recognize the reality of the conflict, which is that there is far more blame on one side than on the other, we give incentives to the terrorists to continue attacking Israel. We pull the trigger.

Every time that there is a war between Israel and Gaza, the images of the war and the counts of deaths and injuries are heart-wrenching. But these wars keep happening, and it’s the same story every time. As long as Hamas and their allies control Gaza, these wars will continue.