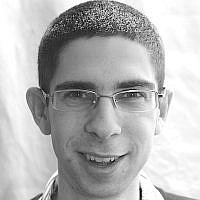 The Blogs
Robin Moss
Apply for a Blog
Please note that the posts on The Blogs are contributed by third parties. The opinions, facts and any media content in them are presented solely by the authors, and neither The Times of Israel nor its partners assume any responsibility for them. Please contact us in case of abuse. In case of abuse,
Report this post.

Israel Engagement amongst young Jews in the UK has been changing, and UJIA, as the community’s premier Israel educational charity, is responding. One response has been the launch this year of a flagship new programme for teenagers, UJIA Israel Fast Track. A group of twenty 16-18 year olds has been meeting regularly since September, learning about Israel and Zionism, understanding the challenges Israel faces as well as the place of Israel within British and British Jewish society and being empowered to become leaders within the Israel conversation. Just before Pesach, we finished this year’s programme.

As the Head of the UJIA Centre for Israel Engagement, I’ve been the lead educator for UJIA Israel Fast Track. This year has been a pilot – we will be expanding next year – and, as a reflective practitioner, I wanted to share four lessons I have learnt from this year’s cohort, and four questions (as the season seems to demand!) that have been thrown up.

Israel and Zionism are complicated – everyone agrees that. So how to explain them to young people? I would say the most important thing I have learnt educationally is that a real engagement with Israel requires three elements. It requires content, actual knowledge about and experiences of Israel, and we shouldn’t shy away from intellectual/textual/statistical/historical material, suitably presented. It requires connection, a profound and dialogical relationship between each individual (and the group as a whole) and Israel, and providing the space and tools to help them think through how they see Israel and the Zionist story has been critical. Finally, it requires frameworks, ways of thinking and understanding the context and broad themes that an engagement with Israel throws up so it makes sense to the teenage mind and sensibility. This last element is crucial, I think, because of the bombardment of information, opinion, rhetoric (and vitriol) that one encounters once one steps into the Israel conversation. Having strong frameworks for contextualising all of this has to be a core output of a successful Israel Engagement programme. Of course, this throws up as many questions. The most pressing, and my first question is: what should be the balance between content (knowing), connection (feeling) and frameworks (understanding), and how do we evaluate if we have got the balance right?

Regardless of one’s own political/ideological leanings, there are major issues that quickly emerge when you discuss Israel and Zionism that need to be tackled head on. It’s just no longer credible to pretend that Palestinians don’t exist or the Israeli society is perfectly harmonious. Furthermore, strawmen or slick one-liners aren’t going to cut it anymore. The young people on UJIA Israel Fast Track asked about and were exposed to some of the difficult topics early on and throughout. Of course, like any programme, we had our limits – no educational conversation can be totally unbounded – but I would always advocate a “big tent” approach to Israel and Zionism rather than chastising young people for their supposed lack of ideological purity (this is a theme that myself and my UJIA colleague Anthony Ashworth-Steen have written about before). Yet this leads to a second question: at what age, and at what educational stage, should some of the most controversial issues in Israel Engagement be introduced, and how do we prioritise issues one over another?

For the first few months of the programme, a fairly constant refrain from the teenagers was “but what are the facts?” Conditioned perhaps by the school system, they had questions and wanted me as the educator to give them “the answers”. I pushed back on this then and I will always push back on it. Not because facts are not important. And not because any and all opinions are of equal validity when discussing Israel and Zionism. But because the days of adults telling young people that there is precisely one way to understand each issue are over, and because “the facts” is not a value-neutral concept! This was an Israel Engagement programme, and I was very clear about my perspective – “this is how I see this issue”. But that is different from saying “this is how I see this issue, and how you should too”. That latter clause is so, so easy to slip into (and I probably did at various points, in all honesty), but won’t in the long run work. The broad educational approach has to be about turning their answers into questions – helping them to challenge their presumptions, hear a wide range of perspectives, develop skills of empathy and fair-mindedness, and ultimately to show them that whatever position they end up adopting, they should be actively questioning to push at the boundaries of their knowledge and understanding. Questions are not just the educator’s best friend. They are also at the heart of any serious, sustainable engagement with Israel. Answers are satisfying in the short-term but quickly become boring – the conversation has ended, it’s time to move on. Questions might be frustrating in the short-term, but they lead to exploration, energisation and ultimately real, in-depth engagement. My third question therefore is: what are the best educational tools for teaching a questions-led approach to Israel and Zionism and how can they be adapted for this important task?

It was a gamble to set up a programme such as UJIA Israel Fast Track. It involved serious commitment over an eight-month period, at an age where the UK school system puts a lot of pressure on young people. Coupled with the alleged apathy that supposedly prevents young people from being willing to really throw themselves deep into a programme of this kind, we really didn’t know how recruitment would go. In the end, we were blown away – 35 credible, high-quality applications for 20 spaces, and a final group that far exceeded our expectations in terms of engagement, enthusiasm and potential for future leadership. Young people still care. We should never forget that. My final question, therefore, is: how can we as educators further harness and unleash the incredible potential within our young people?

It’s been an honour and a privilege to head up this first year of UJIA Israel Fast Track. We will soon be opening applications for the 2017/18 cohort, and I look forward to learning even more from next year’s inspiring, Israel-engaged young people.