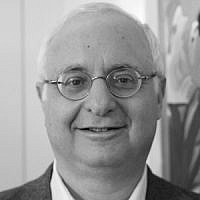 The Blogs
Avi Beker
Apply for a Blog
Advertisement
Please note that the posts on The Blogs are contributed by third parties. The opinions, facts and any media content in them are presented solely by the authors, and neither The Times of Israel nor its partners assume any responsibility for them. Please contact us in case of abuse. In case of abuse,
Report this post.

It seems that even the well-connected EUbusiness which prides itself for being Europe’s leading independent online business information service was caught with surprise. It is clear that its editors were unready to absorb the major shift that took place in the European Union attitude toward the Israeli campaign in Gaza against the terrorist organization of Hamas. In their report this morning they decided to single out in their headline the European appeal to Israel “to keep Gaza operation ‘proportionate'” while referring to the condemnation of the “indiscriminate firing of rockets” by Hamas against civilians only later, in the small print of the news report. The Eubusiness committed another act of misreporting by omitting the forceful statement of the EU regarding the exploitation of civilians in warfare: “The EU strongly condemns calls on the civilian population of Gaza to provide themselves as human shields.”
The EU statement contains the essence of the new understanding and legitimacy that Israel is receiving in the current round of violence in Gaza. Unlike the infamous Goldstone report following the IDF operation Iron Cast in 2009 the EU statement points out to the consistent double war crime which is committed by the Hamas as a matter of strategy: deliberately firing rockets against civilian population and using/forcing its own civilians to serve as human shields. Under international law it is clear that when Hamas is using civilians, schools, mosques or hospitals for military purposes they become military targets, as defined in the Geneva humanitarian conventions.
The Forth Geneva Convention of 1949 and more specifically Protocol 1 Additional to the Geneva Conventions of 1977 forbid the use of civilians (“protected persons”) “to render certain points or areas immune from military operations.” The 1977 Protocol goes further and requires Hamas specifically to remove civilians from the vicinity of its military facilities and “avoid locating military objectives within or near densely populated areas”. The Protocol calls for “necessary precautions” which will protect civilians and civilian objects “against the dangers resulting from military operations.” It is hard to believe that the President of the Palestinian National Authority Mahmoud Abbas, who continues to threaten Israel to bring its leaders and soldiers to trial on war crimes, is not aware of the violations committed by those who recently came under the auspices of his unity government.
It must be noted that the Judge Richard Goldstone, who inflicted an irreparable damage to his professional reputation and personal integrity, didn’t go as far as the EU in his post-mortem retraction. In his article in the Washington Post on April 1, 2011 Goldstone retracted on his own team’s two major charges that Israel had a policy of targeting civilians and that it didn’t investigate the allegations on war crimes. But even in his apologetic article he didn’t have the courage to blame the Hamas for what was also then an official and public policy of using women and children as human shields against Israel.
The international learning process in the fight against terrorism is slow and painful and is often overtaken by the cynical lawfare campaign against Israel. Israel is perhaps the pioneer and the most innovative state in the development of strategies, tactics, weapons and technology in the so-called asymmetric-war of standing armies against terrorists or non-state actors. It has become also the state which leads the way in the reinterpretation and adjustments of the law arrangements and the norms regarding the just use of force in the international humanitarian law against terrorism.
It was only after the terrible toll of the 9\11 al-Qaida attacks against the United States in 2001 that United Nations resolutions were drafted in clear terminology against terrorism using the strong arrangements of military enforcement contained in Chapter 7 of the UN charter. Only after 9\11 the Security Council, for the first time, found it necessary to define the notion of a non-state actor and committed the international community to condemn all indiscriminate acts of terrorism, regardless of their causes. Still, there is a need for more efforts to avoid the misuse of international law against Israel.
The EU statement which made the breakthrough on the notion of “human shields” and condemned their exploitation fell again, probably in a deliberate balancing act, in the semantic trap of “proportionality.” Human Rights organizations and media commentators use the trick of the casualties’ equation to prove the Israeli crime of “disproportionality.” Their claim is that since far more Gaza residents than Israelis have been killed, the Israeli actions are violating the principle of proportionality. It is interesting that even Richard Goldstone recognized in his retraction article that the number game does not make any sense: “That comparatively few
Israelis have been killed by the unlawful rocket and mortar attacks from
Gaza in no way minimizes the criminality. The U.N. Human Rights Council
should condemn these heinous acts in the strongest terms.”
It is wrong and misleading to reach conclusions about right or wrong based on the number of people killed. History has shown that in their attacks overseas during World War II the American in Japan or the allies in Germany have killed millions of citizens in retaliation for attacks against their military and civilian targets. At the time this was justified not only by international law but also by moral terms. There is nothing in the Law of War regarding the relative number of casualties on the two sides. The laws refer to the military value of a target according to its significant on the outcome of the war. If the target has high military value, then it can be attacked even if it seems there will be some civilian casualties in doing so.
It is pity that the people in Israel were imposed to dedicate so much energy, resources and skills on the management of warfare. In leading the fight against international terrorism Israel is also blazing the path of international law and norms in this cruel and deadly threat against humanity.

About the Author
Dr. Avi Beker teaches diplomacy and international law at Tel Aviv University and Ono Academic Center. He was the Secretary General of the World Jewish Congress and a Visiting Professor at Georgetown University.
Comments