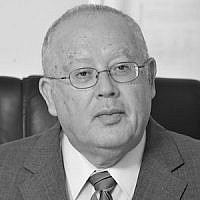 The Blogs
Arye Mekel
Apply for a Blog
Advertisement
Please note that the posts on The Blogs are contributed by third parties. The opinions, facts and any media content in them are presented solely by the authors, and neither The Times of Israel nor its partners assume any responsibility for them. Please contact us in case of abuse. In case of abuse,
Report this post.

The past month has been characterized by an unprecedented and noteworthy flurry of diplomatic activity between Jerusalem, Athens and Nicosia that suggests the emergence of a new geopolitical bloc in the region.

The following day, a trilateral summit was held in Nicosia with Netanyahu, Tsipras, and President of Cyprus Nicos Anastasiades. The summit was followed by a significant joint declaration.

This sharp uptick of diplomatic activity is not taking place in a vacuum. Each participant has his own aims and calculations in mind, and in the background loom their countries’ respective relationships with Turkey.

Yaalon’s visit to Greece serves to illustrate the intensive security and military relationship between Israel and Greece that began several years ago. This involves frequent joint air force exercises (with other countries occasionally participating), as well as joint maneuvers of the two navies. Israeli military planes have been forbidden from flying over Turkey ever since the 2010 Mavi Marmara incident, so they use Greek airspace on their flights to Europe and the United States instead. An Israeli military attaché has been stationed in Athens since the summer of 2014, and he is also accredited to Cyprus.

Strikingly, Yaalon did not hesitate while in Athens to publicly accuse Turkey of supporting terror rather than fighting it, specifically alleging that Turkey buys oil from ISIS. This statement, made in a press conference in the presence of Greek Minister of National Defense Kammenos, was no doubt music to Greek ears. Kammenos heads a small right wing party, The Independent Greeks, which is a coalition partner of Prime Minister Tsipras. Kammenos, who visited Israel last July, will return to Israel this week.

Kammenos will address a conference on “Strategic Challenges in the Eastern Mediterranean” at the Begin-Sadat Center for Strategic Studies on February 18.

The Nicosia Summit, which Prime Minister Netanyahu characterized as historic, was the climax of these activities. It was followed by a joint declaration that proclaimed the tripartite cooperation to be “non-exclusive.” In other words, the tripartite agreement is open to additional countries, such as Egypt and perhaps even Turkey. Hinting at Turkey, the leaders of Greece and Cyprus stressed that the pact “is not directed against any other party.”

The Turkish shadow hovered over all these activities. The media attention given to Israeli-Turkish negotiations toward rapprochement, and the strong American interest in that result, encouraged the Greeks and Cypriots to strengthen their cooperation with Israel. Despite claims by Greece that it has positive relations with Turkey and the negotiations between Greek and Turkish leaders in Cyprus, Turkey is still considered a potential enemy by both Athens and Nicosia. Compounding their historical animosity, the Greeks believe that Turkey purposely delivers to its shores hundreds of thousands of refugees in order to weaken it; and Cyprus has been partially occupied by Turkey since 1974.

The policy of Greek Prime Minister Alexis Tsipras toward Israel is both impressive and surprising. Tsipras, 41, heads the left-wing party Syriza, which has been very critical toward Israel in the past. But in the year since he first took office (he was elected twice, in two elections in 2015), Tsipras has demonstrated centrist policies in both domestic and foreign affairs. The improvement in relations between Greece and Israel started in 2010 with socialist Prime Minister George Papandreou, continued in 2012 with conservative Prime Minister Antonis Samaras, and is being followed today by the leftist Tsipras. The Greek-Israeli relationship, which has flourished under a remarkable variety of political regimes, also enjoys broad support among the Greek public.

Ever since the dramatic upgrading of Greek-Israeli relations almost six years ago, Greece has been concerned that if Israel and Turkey normalize relations, Greece will pay a price. Israel has been consistent in her attempts, including at the recent meetings, to alleviate these concerns, stressing that her relationship with Greece is sound and will not be compromised by her contacts with Turkey. For his part, Tsipras is trying to demonstrate that Greece has its own standing in the Eastern Mediterranean, even going so far as to announce his desire to help resolve the Israeli-Palestinian dispute.

Cyprus obviously has its own fish to fry with Turkey, and is also interested in showing its independence in the region. Israel has a strong defense and military relationship with Cyprus as well that started (surprisingly) during the tenure of Communist President Demetris Christofias, and that continues at full speed under current conservative leader Nicos Anastasiades.

The US is inevitably involved in this complicated regional web. Vice President Joe Biden visited Turkey recently, and also met Netanyahu on the sidelines of the World Economic Forum in Davos in late January. The White House officially announced that Biden telephoned Netanyahu in late January to discuss diplomatic efforts to reach a rapprochement agreement with Turkey, as well as the tripartite summit in Nicosia. The Americans are interested in finding a solution to the Israeli-Turkish dispute, and they see Turkey as an important factor in resolving the Syrian crisis.

The joint statement published in Nicosia following the summit describes seven areas of cooperation: energy, tourism, research and technology, environment, water, immigration and the fight against terror. A trilateral committee is to be established, headed by the directors general of the three Ministries of Energy, to explore the possibility of erecting a pipeline that will transfer gas from Israel to Cyprus and Greece.

The three parties prefer to highlight energy cooperation rather than military ties, but there are more questions than answers regarding gas exports. Israel is uncertain how much gas it will eventually have, if it will be able to export it, to whom, or by what means. Talks with Greece and Cyprus about gas have been going on for several years without any real results. It is conceivable in principle to erect a pipeline connecting the three countries, but it would be very complicated from a technical standpoint, and would cost almost ten billion dollars.

Complicating the issue further is the interest expressed by Turkish companies in Israeli gas. At this writing, the gas issue is still theoretical. It is impossible to predict how it will evolve, to whom Israel will decide to sell its surplus gas, or indeed if it will have any.

From an Israeli perspective, the recent developments with Greece and Cyprus constitute a win-win situation. The strengthening of ties with these countries creates a new geopolitical bloc that could, to some extent, stand up to Turkey. This bloc has both military and political significance. Greece is ready right now to assist Israel within the European Union, as it proved recently when it led the opposition to labeling settlement products. This represents a sharp change in Greek policy within the European Union. Cyprus almost automatically supports the Greek position, which gives the Greeks a double vote within EU institutions. Stronger Israeli relations with Greece and Cyprus may also serve to encourage Turkey to show more flexibility in negotiations regarding normalization of ties between Ankara and Jerusalem.

Ambassador Arye Mekel, a senior research associate at the Begin-Sadat Center for Strategic Studies, served as Israel’s envoy to Greece from 2010 to 2014. He is participating in a joint BESA Center-B’nai B’rith International conference (Feb. 17-18) on “Strategic Challenges in the Eastern Mediterranean.”

About the Author
Ambassador Arye Mekel is a veteran Israeli diplomat and journalist. He served as foreign policy adviser to Prime Minister Yitzhak Shamir, Consul General to New York and Atlanta, Deputy Permanent Representative to the UN, Ambassador to Greece and Foreign Ministry Spokesman. He was also Director General of the Israel Broadcasting Authority, in charge of all State Television and Radio broadcasts. He is currently a senior fellow at the Begin-Sadat Center for Strategic Studies at Bar- Ilan University.
Comments