The Blogs
David Herman
Apply for a Blog
Advertisement
Please note that the posts on The Blogs are contributed by third parties. The opinions, facts and any media content in them are presented solely by the authors, and neither The Times of Israel nor its partners assume any responsibility for them. Please contact us in case of abuse. In case of abuse,
Report this post.

It is not generally known that Israel does have its very own and legendary superhero named Sabraman, with the courage of the Sabra and the faith of Abraham.

Sabraman burst into being in the mid-1970’s due to the collaboration of British-born publisher David Herman and his comic book illustrator and storyteller, Uri Fink.

London-born Herman came on Aliya with his wife Valerie in 1966, not long after graduating from Cambridge with a degree in Modern Languages, founded a publishing company called “Good Times” which for twenty years published newspapers in simplified English, French and Arabic for the Israeli school system, through which Herman discovered Fink’s artistic talents when Fink was only 15 and gave him the invented superhero name Sabraman to produce the first Sabraman comic book, and very soon the Israeli superhero with the Magen David on his chest was achieving national prominence and he became the subject of a whole series of Sabraman comics in Hebrew and English. On the strength of his work on Sabraman Uri Fink developed into one of Israel’s best known comic-artists and cartoonists with his own series of well-known comic characters. And Sabraman even had his own Youtube theme song, written and performed by his singing-publisher David Herman who acknowledges that this catchy song contributed significantly to inspire him to go on to compose and record no fewer than 250 songs in Hebrew, English, French and Spanish which are now on the Youtube under his musical name David Ben Reuven.

Sadly though, mainly for financial reasons, Sabraman was forced into semi-retirement and failed to achieve the national and international prominence that was his due.

However, Herman and Fink have never abandoned the dream of restoring him to his previous eminence as Israel’s principal and invincible bulwark against any forces of evil that might arise to threaten the security of the State and the Jewish people as a whole.

Herman, who now earns his daily bread as a translator-editor, hopes that 2019 will see the triumphant return of Israel’s legendary superhero whose achievements even outshine those of such universal idols as Spiderman, Batman or even Superman. “I very much hope that 2019 will see the triumphant return of Sabraman and that we shall be fortunate enough to find a film company interested in making an animated film version of Sabraman, food production companies prepared to acquire the Sabraman trademark for their products, and even newspapers anxious to publish Sabraman comic strips. It is high time for a big Sabraman comeback. He has been out of the public eye for far too long.”And you can see the superb Ben Reuven’s Sabraman theme song on YouTube. David Herman’s contact phone : 02-6536764 and email: 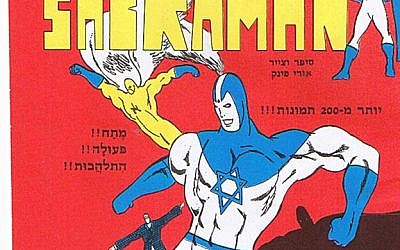 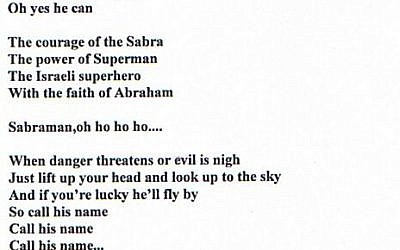