Amidst the warm, happy and historic welcome of Indian Prime Minister Narendra Modi to Israel this week, marking the first time an Indian head of state has visited Israel since the two countries established diplomatic ties a quarter of a century ago, there was one particularly poignant moment. Prime Minister Modi met with 11-year-old Moshe whose parents, Rabbi Gavriel and Rivkah Holtzberg, were the Chabad emissaries in Mumbai and murdered in the terrorist rampage in 2008. Moshe expressed a desire to return where his parents were dedicating their lives in order to complete their mission. Spontaneously Israeli Prime Minister Benyamin Netanyahu offered to give him a ride on his upcoming state visit to India. A beautiful and meaningful tribute to Rabbi Gavriel is in the form of the Israeli NGO Gabriel Project Mumbai (GPM) named in his honour.

In January, I returned to Israel from a tumultuous two weeks in India, a country containing almost a quarter of the world’s population. I spent the bulk of my time in Mumbai (Bombay). It’s almost impossible to describe life in one of the most densely populated cities on the planet earth. One could literally fit Israel’s population into the city almost three times!  The sounds, smells, poverty/wealth and overcrowding just beggar belief.  It is an assault on ones senses. The prime purpose of my visit to India was to volunteer to teach children in the slums with the Israeli NGO Gabriel Project Mumbai (http://www.gabrielprojectmumbai.org/). According to its website,

Gabriel Project Mumbai (GPM) cares for vulnerable children living in slums and poor rural areas of India by attending to the Triad of Children’s Well-being: education, health and nutrition. The GPM approach works with local NGO partners and women’s empowerment initiatives that have positive ripple effects in the slums, thus forging a powerful win-win model for advancing communal development.”

It was a most intensely rewarding, humbling, important and thought-provoking experience.  A real life-changer, both for myself, and the students I taught.  Every morning I took the train to the Kalva slum with David Ramrajkar, my 32-year-old local Jewish Indian guide, who is a full-time worker for GPM. The train was so overcrowded that people were literally hanging out of the doors and some folks even climbed on the roof. After alighting from the train we met another local Indian Jew, Leya Elias, a highly educated 23-year-old Indian Jew who quit her job in an upscale PR company to work with the less fortunate.  She took me by foot through the slums, via the GPM kitchen, to the classroom.

The slums are difficult to conceptualise let alone describe. Piles of rubbish and waste are everywhere, sewerage flowing down the dark narrow streets, animals; cows, pigs and dogs wondering forlornly everywhere and folks struggling to exist in tiny tin huts with no running water or electricity, and very little hope. The overcrowding is difficult to put into words, and yet all attempt to preserve some kind of cleanliness and dignity and eke out a meagre living. I took a few photos on my phone surreptitiously, but they don’t accurately convey the scene. It was like a post-Armageddon world.
Finally, we arrived at the classroom of the GPM. We had to scramble up a ladder to a second floor room. The classroom was like a tiny oasis. The room was clean and airy with light streaming through the windows. There were sixteen kids sitting on the floor, ranging in age from seven to twelve, unlike other Indian kids, they were not wearing school uniforms, but rather a motley assortment of clean but shabby clothes. They were all sitting barefoot and I removed my shoes as well. There was a local Indian teacher, Anjani, in the classroom and Leya came to translate.  The students all treated me with mega-watt smiles and a resounding “good morning teacher” that just melted my heart. I had planned to teach a class on art. I figured as I could only communicate through translation, I would speak the international language of art and beauty and, at the same time, try and convey some important life lessons. 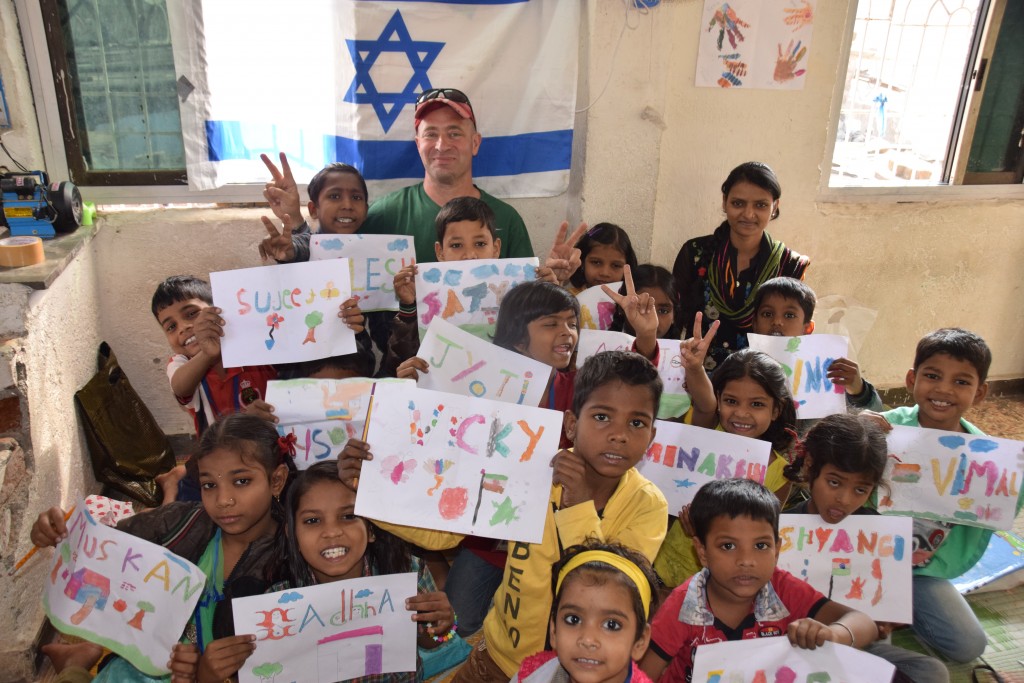 Tuvia with the Children in the GPM classroom in the Kalva slum. (T. Book, 2017)

For my first session, after introductions, I asked them all to draw their faces and later to add colour. As one can imagine, there was such a cute and hilarious collection of Picasso-like faces as a result. I then demonstrated the academic way to draw a face and they all assiduously copied and learned. We moved onto other art projects and I divided them into groups of four and gave each group a picture of a butterfly with four colour markers to colour in the picture and left them to their own devices with Israeli pop music blaring out in the background. One cannot even begin to imagine how much joy and happiness the $1 art projects provided these children.

Obviously every group produced brilliant but different results, which were ultimately used to decorate the walls of their classroom. To wrap up, I reminded them, through the translator, that obviously even though we all have the same facial features (and all the butterflies picture projects had the same outlines) all of the drawings and colours came out different for each person and group. This teaches us whilst we are all created equal we are all different. The most important thing is to find our own inner light, purpose and meaning. We shouldn’t judge people by their looks, clothes or material possessions, but rather by their kindness, smiles and actions to make a better world. I reminded them of their potential to effect change and wished them well in their journey. I finished by showing them the Israeli flag and showing them the blue stripes symbolising the blue heavens/sky and water and white symbolising purity and mentioning that those colours are also in the Indian flag.

The level of respect and joy in that small classroom oasis, despite the abject poverty literally surrounding them, and the eager appreciation on the faces of the children at receiving what we take for granted, education, shelter, food (they are provided nutritious meals by the GPM and provided a health clinic for inoculations etc. which they otherwise wouldn’t receive) just blew me away.

Those sweet children who have so little but still filled my modest classroom with light and smiles :). They are the students who have had the most impact on me during my long teaching career and I could not wait to return to them every day and bring more art, colour and hope into their lives. I honestly do not know who got more out of it. We need to have so much gratitude for what we have and need to share our privilege with those less fortunate (and raise our children with those values) in order to try and remember that our eternity and meaning in life are our good deeds and our children. By the end of our journey, however long we are blessed to live, we need to leave the world a little better than when we came into it.

The challenge of Tikkun Olam, our own responsibility for others is something Israel prides itself in. Israel strives to be a “light unto the nations.”  This is one more example of how Israel, with all of its imperfections, sees as part of its purpose looking out for other people. As Prime Minister Netanyahu stated:

Today more than ever before we have among us worldwide circles of aid and assistance. It does not matter where you are or what language you speak, we all grew up on a set of common values. The Talmud teaches us that, “S/he who save one life it is as if they have saved an entire universe.”

In addition to raising funds and galvanising worldwide awareness for GPM I hope that my personal mission will remind us that when we open our hearts to the world and give of ourselves to others we become part of a long tradition of charity and righteousness and leading by personal example part of the Jewish culture of Tikkun Olam. 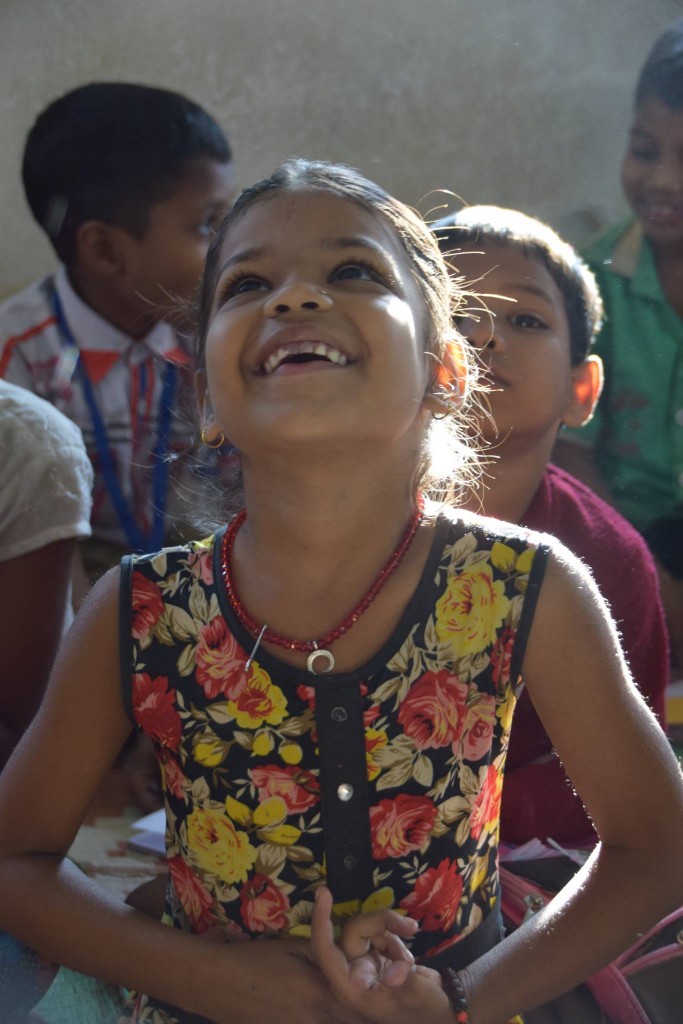