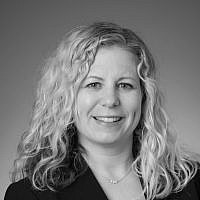 The Blogs
Becca Hurowitz
Apply for a Blog
Advertisement
Please note that the posts on The Blogs are contributed by third parties. The opinions, facts and any media content in them are presented solely by the authors, and neither The Times of Israel nor its partners assume any responsibility for them. Please contact us in case of abuse. In case of abuse,
Report this post.

The handwringing within the Jewish community and in some circles in Israel regarding the BDS movement is exaggerated. In fact, according to a recently released perception survey conducted by Vibe Israel of college-educated Americans, an astounding 81 percent of the general public surveyed answered that they would do business with an Israeli company or purchase a product made-in-Israel. Thirty-four percent of the businesspeople surveyed stated that their opinion regarding doing business with Israel improved in the last year.

Better yet, the survey focused on the potential change in perception of Israel by millennials, ages 25-44, following the three significant events of the past year – Operation “Guardian of the Walls”, Israel’s handling of the COVID pandemic and the record-breaking year of Israel’s high-tech industry.

The findings had several lessons. Firstly, many of us in Israel and the Jewish Diaspora thought that Operation Guardian of the Walls represented a dramatic public relations crisis for Israel. Rather, the survey showed that the events of May 2021 did not represent a watershed moment for Israel’s global image three to four months following. This tells us emphatically that we must operate according to hard data rather than personal opinion, especially after a major crisis.

The data also supports the premise that efforts and resources towards improving perceptions of Israel should be split between diluting the negative arguments and doubling down on positive brand and perception building. Organizations in Israel and the Jewish Diaspora that are Next-Gen facing should offer a narrative and story about Israel that resonates with young people. It is very important that our community define the conversation about Israel, in our own positive and authentic terms, rather than let anti-Israel voices take the lead.

Finally, a major takeaway from this year’s annual perception survey is that in the US, the BDS campaign against Israel is not as effective as many people worry. Regardless of the efforts to persuade Americans to boycott, divest and sanction Israel, the general public and business community in the US are more interested than ever in doing business with Israel’s skyrocketing economy and its innovative tech companies and buying Israeli products.