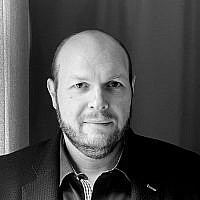 The Blogs
Nerses Kopalyan
Apply for a Blog
Advertisement
Please note that the posts on The Blogs are contributed by third parties. The opinions, facts and any media content in them are presented solely by the authors, and neither The Times of Israel nor its partners assume any responsibility for them. Please contact us in case of abuse. In case of abuse,
Report this post. 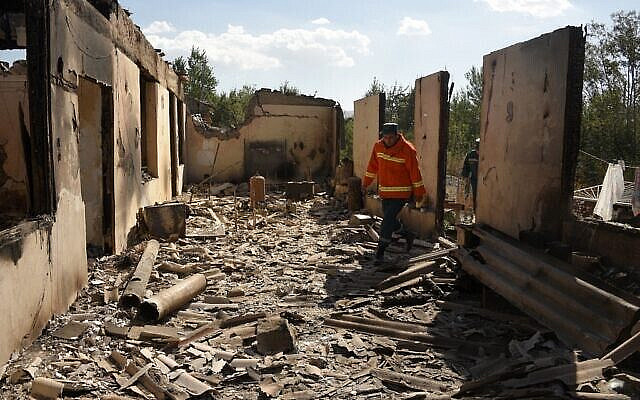 Firefighters work among the ruins of a house which was hit by Azeri shelling during recent border clashes with Azerbaijan, in the settlement of Sotk, Armenia, on September 14, 2022. (Karen MINASYAN / AFP)

While the world’s attention is riveted by Russia’s invasion of Ukraine and the Ukrainians’ recent gains, another aggression is taking place not far away, in another corner of the former Soviet space in which Israel has a major role to play.

Azerbaijan and Armenia fought a war two years ago, in which Baku occupied autonomous territory populated by Armenians. Now, just after midnight this past Tuesday, heavy artillery shelling by Azerbaijan struck five different targeted locations inside Armenian territory, causing significant loss of life. No one but Azerbaijan’s dictator, Ilham Aliyev, can say what’s next.

This is the same Aliyev who last February, just days before Putin’s invasion, was in Moscow signing a major strategic alliance with Russia. That alliance occupies a clear place in the global dichotomy between authoritarians and the free world. So does Armenia: Aliyev’s target in his aggression is a scrappy young democracy and one of the world’s oldest Christian civilizations.

So in this Caucasus conflict, which side is Israel on?

Values diplomacy should align Israel with Armenia, a fellow democracy and a fellow non-Muslim nation sandwiched, like Israel, in the larger Middle East space. Moreover, like the Jews, Armenians suffered one of the most horrifying genocides of the 20th century.

But it is also a genocide that Israel – unlike the United States under Joe Biden – has yet to recognize. That’s because Israel doesn’t want to upset Turkey, a country whose own authoritarian leadership has hardly been a friend to the Jewish state.

Israel also doesn’t want to antagonize Baku with friendship toward Yerevan. That’s because Israel imports oil from and sells weapons to Azerbaijan (including killer drones which proved devastating to Armenia in the 2020 war). And Israel also uses Azerbaijan – according to reports – as a forward base in its activities involving the neighboring Islamic Republic of Iran.

We are looking at a sad case of might makes right, in which Israel is choosing realpolitik – a polite word for cynicism – over values and long-term interests.

Israel might, however, also consider something else: Azerbaijan’s actions at present are in dramatic misalignment with Israel’s indispensable ally, the United States.

Baku had been typical of the authoritarian regimes masquerading as American allies to draw aid and compel ignoring of an abysmal human rights records. Aliyev’s posturing has relied on two pillars: promoting European security energy and counter-terrorism. This has started to fall apart amid a phenomenon I call “strategic narcissism” – an extreme form of hubris on the world stage that compels self-obsessed regimes to reveal their true colors. Typically it follows a victory – such as Azerbaijan’s 2020 military success in seizing autonomous parts of Armenian-populated Nagorno-Karabakh.

On a quotidian level, the divergence of interests appears to have its seeds in Azerbaijan’s desire for regional expansionism and its displeasure with the OSCE’s Minsk Group, a forum led by the US, Russia, and France which has aimed to mediate the long-simmering conflict. Aliyev fears any mediation will threaten its 2020 gains, and has begun declaring that the forum is dead.

The United States then appointed career diplomat Philip Reeker to the post of Senior Advisor for Caucasus Negotiations, declaring in a statement that it was “committed to helping Armenia and Azerbaijan negotiate a long-term political settlement to the Nagorno-Karabakh conflict.” Baku replied by threatening to remove the US from any dealing with South Caucasus’s conflict.

When US and French diplomats refused to attend a propaganda tour of the captured territories organized by Azerbaijan’s government, Baku attacked the United States as being “disrespectful” and “shameful.”

Baku’s evident goal is to “estrange” the US from the South Caucasus, so that the club of dictators may suffocate the region’s nascent democracies.

Some might ask whether Azerbaijan’s regime truly deserves special censure, considering how many despots there are in the world. A survey of its record is useful.

The world’s various bodies that measure and rank abuses by governments agree, and their reports make for grim reading. Freedom House qualifies Azerbaijan as a “consolidated authoritarian regime” with a democracy ranking of 1 out of 100. Human Rights Watch details an “appalling record” of “torture and ill-treatment” of dissidents, while Amnesty International documents “war crimes” including “extrajudicial killings and torture.” Transparency International ranks Azerbaijan 128th out of 180 countries in its corruption survey, while the Human Freedom Index places Azerbaijan at 127 out of 165 as one of the least free countries.

Regarding freedom of expression, a key indicator of Western and American values, Reporters Without Borders ranks Azerbaijan 167 out of 180 countries and the Global Expression Report puts it at 36, worse than Afghanistan.

A big part of the narrative is the epic corruption of the ruling Aliyev family, which is suspected of stealing billions as revealed in the Pandora Papers scandal. And some is cartoonish, as when Azerbaijan’s Consul General to Los Angeles Nasimi Aghayev was discovered having forged a certificate of appreciation from the County of Los Angeles, falsely extolling the strengthening of “ties of friendship between Azerbaijan and Southern California.”

In this context, Azerbaijan’s hostility to the United States emerges not as a momentary divergence of interests but a fundamental contradiction in values: the Aliyev regime detests American values. Israel should think twice about being in cahoots with such a bad-faith actor on the world stage.

About the Author
Nerses Kopalyan is an associate professor-in-residence of Political Science at the University of Nevada, Las Vegas, specializing in international security, geopolitics, political theory, and philosophy of science.
Related Topics
Related Posts