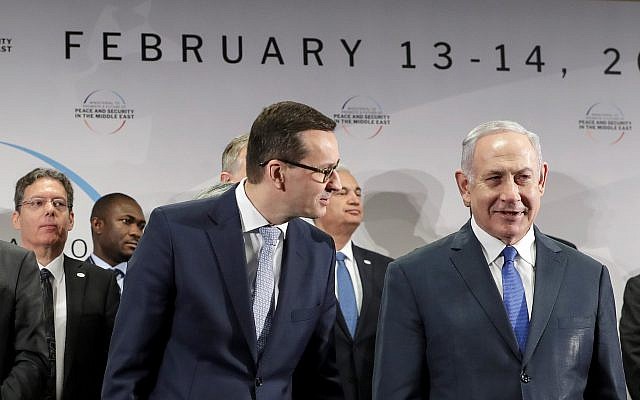 Prime Minister of Poland Mateusz Morawiecki, left, and Prime Minister Benjamin Netanyahu, at a conference on Peace and Security in the Middle East in Warsaw, Poland, February 14, 2019. (AP/Michael Sohn)

The latest brouhaha over Prime Minister Benjamin Netanyahu’s comments on the role of Poles in the extermination of over three million Jews during World War II, together with the clarifications he issued at the insistence of Prime Minister Mateusz Morawiecki on the eve of the convening of the Visegrad Group in Jerusalem, raises, with renewed vigor, the question of how far Israeli leaders are willing to compromise the country’s foundational principles in order to promote what they consider to be the interests of the state. This issue is not new: it is has accompanied Israeli decisions in the international arena for decades. Today, however, it threatens to boil over as time and again, Israel appears to abandon its historical obligations and basic values in favor of (often questionable) short-term gains.

The ongoing debate pits instrumentalists who argue that Israel’s central interests require adjusting to changing circumstances (sometimes at the expense of guiding norms) against those who insist that the country’s underlying vision of equality, justice, and peace, in both its Jewish and universal meanings — as so carefully crafted in Israel’s Declaration of Independence — serves as a sure compass for the pursuit of its pragmatic interests. Over the years, the realpolitik worldview has gained ascendance over its value-driven alternative, fortified by the dubious claim that anything that strengthens Israel at any given moment is, by definition, ethically justifiable. Now this approach may be stripping Israel of its fundamental raison d’etre. Only a willingness to learn from past experience may stop this trend and help to reinstate those values that have enabled Israel to survive and thrive in the community of nations for the past 70 years.

Israel was constructed on the ashes of the Holocaust with the goal of providing a safe haven for Jews and constructing a decent society for all its citizens. Yet in the mid-1970s, after almost all African states severed relations with Israel, the architects of Israel’s foreign policy turned to South Africa to counterbalance the greatest diplomatic debacle in the country’s history. From the outset, this move created moral dilemmas for Israel. The apartheid regime in South Africa was based on the very racist theories that are anathema to Israel’s historical tradition. Israeli leaders had repeatedly denounced its ideology. The white leadership at the time had a long history of anti-Semitism. But the two beleaguered countries shared certain common interests (the need to cultivate diverse economic partnerships, concern over growing Soviet influence, the quest for sophisticated arms), along with a fear of growing international isolation.

Immense efforts were devoted to cementing the Israel-South Africa relationship, partly rationalized as a means of protecting South Africa’s flourishing Jewish community. A comprehensive pact was sealed during the official visit of Prime Minister John Vorster to Israel in 1976, which culminated in a wreath-laying ceremony at Yad Vashem. The picture of this noted anti-Semite (he was incarcerated during World War II for his pro-Nazi activities) brought to a head a blatant contradiction between Israel’s essential moorings and its actual policies.

Despite the consequent uproar (which included the resignation of then director-general of the Ministry of Foreign Affairs, Professor Shlomo Avineri), Israel deepened its ties with South Africa, only belatedly heeding the voices of internal critics and joining the international sanctions imposed on South Africa on the eve of the fall of white rule. The lessons of this ill-advised escapade still resound. No amount of rationalization could explain Israel’s collaboration with an openly racist government and no crucial Israeli interests were promoted in the process. Israel emerged with a tarnished image that has haunted it for years — consequently also hindering the important goal of resuming diplomatic relations with most sub-Saharan countries. The message was clear: the practical cost of the fallout of diverging from core principles was far greater than whatever short-term benefits may have accrued from these ties.

It may seem that the close connection between what is morally correct and what is worthwhile would have been largely internalized at this juncture (indeed, the end of the Cold War, new economic opportunities and the Oslo process opened many doors for Israel in subsequent years). But as time progressed, the profound lesson of the South African experience has been systematically unlearned. The first inklings came with the expansion of security ties with dictatorial and repressive regimes throughout the world (including, most notably, Myanmar, Eritrea, Chad, and several central Asian republics). But these have turned into a veritable deluge under the present Netanyahu government.

The turn toward the Visegrad Group is a key example. The nurturing of ties with Poland, Hungary, Slovakia, and the Czech Republic was initially viewed as a means of breaking European Union consensus on matters related to Israel and Palestine. It has since grown to incorporate issues such as support for recognition of Jerusalem as the capital of Israel alone and the struggle against Iranian moves in the Middle East. A series of memoranda have cemented relations between Israel and these central European states, leading to mutual visits (always including a stop at Yad Vashem) and now to a summit in Israel.

But here, once again, these immediate pragmatic considerations have not been able to attenuate the moral challenges involved. These have created an association between Israel — which constantly boasts that it is the only democracy in the region — and inescapably illiberal and neo-authoritarian regimes that, at best, maintain some semblance of electoral competition. The purposeful alliance of Israel with these governments cannot but raise questions about its own democratic robustness and its commitment to the democratic ethos. If that is not enough, these countries are led by highly nationalistic political parties that possess neo-fascist overtones and distinctly anti-Semitic roots. Cuddling up to leaders such as Victor Orban, Andrej Babis, or Mateusz Morawiecki cannot be easily reconciled with Israel’s obligation to protect the legacy of the past and to safeguard Jewish communities suffering from new anti-Semitic threats. The verbal acrobatics of Netanyahu and his supporters provide but feeble attempts to plaster over what is a growing ethical void.

Many Israelis, mostly from the opposition (including Yair Lapid, Avi Gabbay and Tamar Zandberg) have constantly pointed to the inconsistencies involved. They have been joined by scholars, journalists, and survivors who bemoan the loss of any historical sensitivity on the part of Israel’s leaders and remain unconvinced of the paramount utility of forging ties with these governments. There has to be an overwhelming reason to create such a chasm between Israel’s values and its actions, not only in these cases, but also in relationship to Israel’s current ties with the Trump administration. If there isn’t, then these policies become at best cynical and at worst hypocritical.

The fallout is just too great. In the first instance, these moves indirectly condone anti-Semitism if it comes together with support of current Israeli policies, thus belittling the contemporary challenges of anti-Semitism and the dangers created by its instigators. Secondly, they sow confusion about the racist nature of anti-Semitism of whatever sort. Third, such steps leave no room for reasoned disagreement with Israeli policy, placing support for the agenda of the present government above all other values. Fourth, they adversely affect the position of Jewish communities in a growing number of countries. Fifth, they can easily backfire (vide the Polish prime minister’s withdrawal from the forthcoming summit this week). And, finally, these policies may ultimately undermine Israel’s very legitimacy by excluding it from the democratic value community that has propped it up internationally since its inception.

These actions of Israel’s current leadership are nothing short of outrageous. Even if they can be partly explained by electoral considerations, these, too, have limits (Netanyahu is now openly playing with fire, hoping against hope that he will not get burned). But the damage wrought in the process to the Israel’s future is immense. A country that has no pride in its origins and in the values that led to it creation rapidly loses its moral direction. Without consciously rehabilitating the complementarity of values and interests, this course can easily lead to oblivion — another, perhaps central, reason to change course before it is too late.