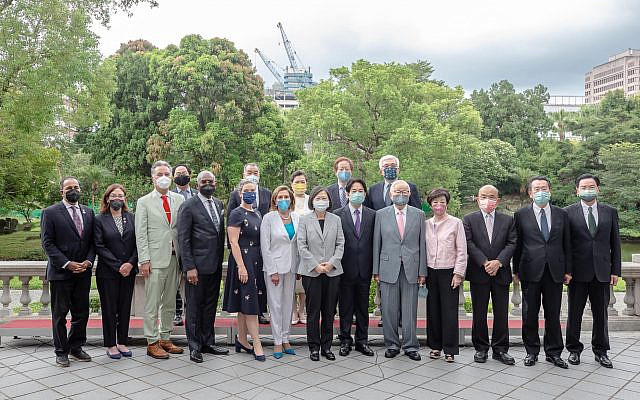 One of the great battlefields of the war in Ukraine and the rise of the new China-Russia “all weather friendship” declared by Chinese President Xi Jinping and Russian President Vladimir Putin on the 4th of February has been the high tech space which China and Taiwan control. The United States supports Taiwan for idealistic and political purposes but also because strategically Chinese annexation of Taiwan will firmly place the global semiconductor industry into complete Chinese control, destroying the US consumer, defence and automobile markets.

Israel is the world’s high tech innovation basket and between Silicon Valley, California, Israel and India most of global innovation matters. At the G20 head of states summit in Rome in October 2021, leaders discussed supply chain resilience. Alarm bells have rung in all global democratic capitals, but especially Washington DC, New Delhi and Paris, about a tomorrow where most modern economic and industrial growth may be hostage to China’s dominance in the semiconductor industry. Israel here sees itself transformed into a key political player where its technological prowess, makes it a leader of the free world. Intel’s purchase of Israeli Tower Semi-conducter for $5.4 billion, is one key example of the Israeli semi conductor industry coming of age.

The Business Standard reported in May 2022 that the International semiconductor consortium ISMC will invest $3 billion in India’s southern Karnataka state to set up a chip-making plant, the state government said on Sunday. ISMC is a joint venture between Abu Dhabi-based Next Orbit Ventures and Israel’s Tower Semiconductor. This is a clear example of the West Asian Quad (now known as the I2U2), a new economic grouping of Israel, India, United States and the United Arab Emirates, to counter Iran. However it also seems that slowly the I2U2 is also working at economically countering China, following the Biden White House’s strong anti-China push. To understand why the I2U2 countries are slowly developing independence in the tech sector, one also needs to analyse recent happenings in Taiwan.

Speaker Nancy Pelosi’s visit to Taiwan has passed off with much rhetoric. The Chinese have used the opportunity to show off their military might. However, from a strategic perspective, the Pelosi visit was significant for her meeting with Mark Liu, Chairman of the Taiwan Semiconductor Manufacturing Company (TSMC), world’s largest chip manufacturer. The posturing by both the US and China on Taiwan has at its heart the global battle for semiconductors. It is a Silicon war. The passage of a new US bill to enhance US chip manufacturing ability signals a new technological battle with China in which Taiwan is likely to play a crucial part. That is the primary reason for Pelosi’s meeting with Mark Liu. Taiwan and Israel are the US’s two key allies in the high tech space to maintain its dominance.

Mark Liu is an understated billionaire-businessmen. But he is key for the global defence industry. TSMC produces the chips which are key components of most missiles and is the world’s most valuable semiconductor manufacturing company with market cap of US$ 426 billion. The firm produces the world’s most cutting-edge chips, making semiconductors that Americans depend on everyday to power their iPhones, medical equipment, and fighter jets. If China, the world’s manufacturing giant, lacks production facilities in any one thing, it is in these chips.

Speaking to CNN (1 August 2022), the TSMC Chairman warned that disaster looms if Beijing decided to take the island by force. “The war brings no winners; everybody’s a loser,” he said, citing the Ukraine war that has created enormous damage for both Kyiv and Moscow, as well as plunged the West into an immense recession. The US electronics industry w represents roughly 64% of the Taiwanese group’s revenue, and would be hard hit in a Chinese invasion of Taiwan. China accounts for another 10 per cent of TSMC’s turnover and as such threatens to hobble its own economy as well, should it decide to seize the island. TSMC’s chip sales to American tech giant Apple alone made up one-quarter of TSMC’s revenue in 2021.

Western media reports indicate that during the now widely covered visit to Taipei, Pelosi and Liu discussed the ‘CHIPs and Science Act’ that President Joe Biden recently signed. The Taiwanese media said the new legislation includes US$52 billion to support chip making in the US. The TSMC is likely to benefit from the US$12 billion chip factory it is planning to build in Arizona. Both Pelosi and Liu also reportedly discussed “larger and recurring subsidies” and “nurturing STEM graduates” in the USA . The global chip shortage amid the pandemic has delayed production of cars, TVs, and computers and helped fuel global inflation. The shortage prompted US President Joe Biden’s administration to redouble efforts to invest in and re-shore the chip making supply chain. A larger conflict among China, Taiwan, and the US, however, could cause further disruption before supplies chains in Israel, India and Europe are ready to step in.

92 per cent of the world’s leading-edge semiconductors, circuits just 10 nanometers in size or smaller, are produced in Taiwan. The only reason TSMC remains below the radar is that it serves as a foundry focused on the manufacture of silicon wafers. It specialises in supplying companies that outsource their production, so-called fab-less semiconductor companies: TSMC chips are built into consumer branded products like an Nvidia graphics processor or a Qualcomm logic chip in a smart phone.

The current dialogue between the US and Taiwan on semiconductors thus the beginning of a new phase in the trade war between China and the US, focused on niche technology relating to semiconductors. With China claiming that Taiwan is a part of the mainland, any US-Taiwan deal on semiconductors would strike a discordant note and that is precisely why Beijing has cut off all engagement with the US. Data also reveals that that the TSMC has of late become “less reliant on revenue from China”. Reports indicate that the Chinese government reportedly seized on Taiwan’s chip sector as a means of retaliation for Pelosi’s visit. Amongst other measures, China also announced that a ban the export of natural sand, a raw material used in chip making, along with food and other items in retaliation for Pelosi visiting Taiwan. China Daily, said the sand ban would “damage Taiwan’s chip making abilities”. Pertinently, Taiwan imports “just three per cent of its natural sand from China”. An opportunity arises for India to step in and supply natural sand to Taiwan, however, small the quantity.

There is a growing perception in Asia that Pelosi’s visit may have opened a new phase for Taiwan-based companies. However, linkages that China has with both the US and Taiwan in this field suggest that an immediate moving away from Beijing in the supply chain will be difficult. China may be a relatively small market for TSMC chips in finished products, but the former is the world’s largest semiconductor consumer in terms of unfinished goods. For instance, Apple supplier Foxconn, may import a TSMC chip from Taiwan to mainland China. That chip could end up in an iPhone that’s sold in the US. That means inter-dependence between TSMC and China continues to remain quite high.

The bottom line is that TSMC must be prepared for a situation where China may retaliate much more than banning sand export.  Additionally, one is sure that China’s military plans for Taiwan include one to neutralise TSMC factories on the island. Pelosi’s departure from Taiwan saw the Chinese demonstrate their anger with a burst of military activity over the waters surrounding the island, summoning the US Ambassador in China and halting several agricultural imports from Taiwan. The ultimate test of China’s resolve will come when a showdown over Taiwan (and the US) is played out in the technology arena. With President Xi Jinping preparing for a third term in office one is quite sure, this too has been factored into their plans.

Meanwhile the world prepares for the China-US showdown, possibly after Xi’s reelection in October but before the US mid-terms in November to put pressure on the US democratic system. The I2U2, specially Israel and India become key players in the silicon wars, which with information wars change battlefields of the 21st century.