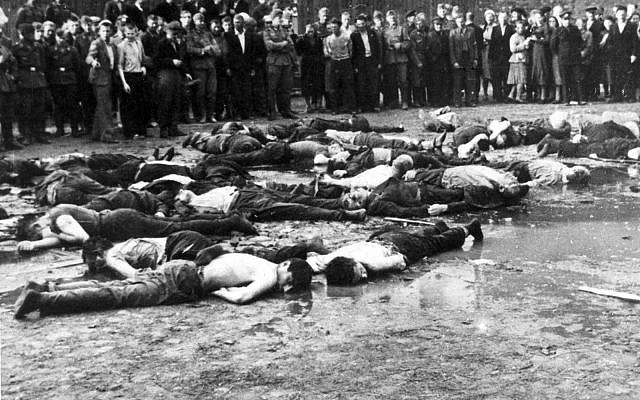 Aftermath of the Kovno, Lithuania (or Kaunas) 'garage' massacre in June of 1941, perpetrated by pro-German Lithuanians (public domain)

In the past, when Israel was very isolated diplomatically, the arrival of a visiting prime minister or president was always a big deal, but those days are long over. That will help explain why the visit last week of Ukrainian President Petro Poroshenko was barely mentioned, if at all, in the Hebrew-language media, and the same thing will probably happen this week during Lithuanian Prime Minister Saulius Skvernelis two-day visit in Jerusalem. Such visits, especially by leaders of countries with limited political clout or little strategic importance to Israel, are no longer of any interest to our local media in, since they’ve become mundane, and ostensibly are not newsworthy.

For many of us, however, who were personally affected by the Shoah, as well as those directly involved in the wide range of issues concerning the Holocaust and the preservation of its memory, such visits are far from irrelevant. The arrival in Israel of the leaders of the countries where the Holocaust transpired, are opportunities for the leaders of our one and only Jewish state to take these guests to Yad Vashem, and to try to advance various Holocaust-related issues in face to face discussions. In fact, in recent years this has become even more important than ever, in the case of the leaders of post-Communist Eastern Europe, where the problem of Holocaust distortion has become increasingly important and dangerous.

For those unacquainted with the term, it refers to a systematic attempt, not to deny that the Shoah took place, but rather to rewrite the narrative of World War II and the annihilation of European Jewry to achieve four goals:

None of this is new, these were the goals since the fall of the Soviet Union in 1991 and the transition to democracy, but initially these objectives were pursued with some degree of restraint, until most of these countries were admitted to the European Union and NATO, which unfortunately did not require that these countries preserve the accuracy of the historical narrative of the Holocaust as a condition for their acceptance. Thus we now face a situation in which the active participation of local collaborators in Holocaust crimes is being systematically whitewashed, while museums, exhibitions and history books teach that Communist crimes were genocide, and just as bad as those of the Nazis, neither of which is correct historically. Nazi murderers who fought against the Soviets are turned into national heroes, and who knows how long the International Holocaust Remembrance Day will survive, if the proposals for a more inclusive memorial day for all the victims of totalitarian regimes will be accepted.

Perhaps the saddest part of this story is that Israel, while fully apprised of the situation, has knowingly chosen to refrain from attempting to combat these phenomena. The one time that it recently tried to fix the damage, in Poland, it actually made things worse by signing an agreement that accepted a false narrative which  practically absolved Poles of any wrongdoing. Call it “realpolitik,” or “national interests,” or “political necessities,” but the truth remains the same. Israel has preferred to try and reap political capital at the expense of the accuracy of the narrative of the Shoah. The country that claims to be the heir of the Six Million, has abandoned its role as the custodian of Holocaust memory. If the primary offenders in Eastern Europe,  Ukraine, Lithuania, Hungary, Poland, Croatia, Latvia, Romania and Estonia, held the key to dismantling Iran’s nuclear program, or achieving everlasting peace and security for Israel in the Middle East, then Israel’s silence on these issues would, with great pain, be understandable and acceptable, but that is obviously not the case.

The time has come for Israel to reset its moral compass and begin to engage our new friends in Eastern Europe in a frank and firm manner on these issues. We can tell them that it is no longer possible to bring their grandparents to justice, and we do not blame them for their grandparents’ crimes, but at a minimum we expect them to admit the truth and teach truth about the Holocaust in their respective countries. The current visit of Lithuanian Prime Minister Skvernelis is as good a place as any to begin.