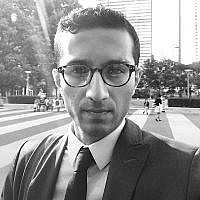 The Blogs
Ehsan Rehan
Apply for a Blog
Advertisement
Please note that the posts on The Blogs are contributed by third parties. The opinions, facts and any media content in them are presented solely by the authors, and neither The Times of Israel nor its partners assume any responsibility for them. Please contact us in case of abuse. In case of abuse,
Report this post.

“It would be better if the Jews left Pakistan.” We doubt there is any place in the world where they will find favorable living conditions except maybe India” was how a Pakistani newspaper in 1948 described the immigration of Jews out of newly created Islamic Pakistan and into secular India.

This was a time when the Palestine-Israel conflict was at its peak and the Pakistani politicians were even ready to send in their limited army to liberate the Arab-Muslims. Fast forward to 2017, the same politicians are hiring “non-Muslims” to take care of their own personal security. Meanwhile, the same Arab-Muslims who they wanted to liberate are getting friendlier with Israel and even the Palestinians are now distancing themselves from the extremism rhetoric being propagated by Pakistan. Just recently the Palestinian authority recalled its Ambassador to Pakistan for attending an extremist rally.

In the Islamic Republic of Pakistan, the Ahmadiyya’s can be jailed for reciting the “Azan” [ Islamic Call to Prayer ]

The Adhan incident was in response to the “ Muezzin Bill ” which restricted the use of loudspeakers for the Islamic call to prayer. The “Ban on Adhan” became the topic of debate not just in Israel but across the Muslim world. Like the rest of the Muslim world, Pakistanis also saw it as another form of oppression by the Israeli state,

The irony is that Pakistan’s own policy towards Adhan (Islamic call to prayer) is the most biased in the world, a policy which many Arab and Pakistani Muslims are unaware of. Back in 1984, The Islamic Republic of Pakistan took a step that no nation, not even Israel has so far done. Pakistan completely banned the Adhan and made it a criminal act punishable by up to two years in prison.

However there is a twist, the ban and the criminal penalty only applies to individuals from the minority Ahmadiyya Muslim Community, a small Islamic sect considered heretic under the Pakistani constitution. Had Abu Arar been an Ahmadi and did the same in Pakistan instead of the Knesset, he would have been considered a blasphemer and jailed for two years. In 2014, an Ahmadi accused of blasphemy was killed in a Police station even before he could face the charges.

The law even goes further and bans the Ahmadi Muslims from saying the Islamic greeting of “Assalamo Alaikum” and prevents them from keeping copies of Quran or calling their worship places as Mosques. In 2015 an Ahmadi bookstore owner was charged and jailed under the anti-terrorism act for keeping and selling copies of the Quran and other Islamic books.

However, on the other hand, the Ahmadis enjoy complete religious freedom in Israel, where they can openly practice their faith alongside Jews and Christians. The small neighborhood of Kababir in Haifa has become a model of religious harmony, a model which Israel should work on duplicating across the Muslim world.

When Pakistan was up in arms over the Adhan Ban, the Palestinians and Israelis came together to fight the wildfires near Haifa. The Ahmadi mosque in Haifa even opened its doors to those affected by the fires.

During the same time, Muhammad Sharif Odeh leader of the Ahmadiyya Muslim community, along with Israel’s Christian, Druze and Jewish leaders paid a visit to Auschwitz, to honor the memory of millions of Jews and other victims of the Holocaust.

Then in 2017 when the Ahmadis were being hunted across Algeria, Israel stood alongside the U.S. and condemned the treatment of Ahmadis in the north African country.

These small glimmers of hope have not gone unnoticed in the Muslim world. When U.S. President Trump announced the Jerusalem Embassy move, something unexpected happened in the Pakistani senate. There were, of course, resolutions and statements which condemned the move but Senator Muhammad Ali Saif stood up and smashed the narrative which has been built over the decades, he said:

“Name one Islamic country which does not want to have good relations with Israel, look at how many Islamic countries have their embassies in Israel. But for some reason, we are the only ones who can not have diplomatic ties with Israel, because the moment you name Israel you get labeled as a Kafir (Infidel). Which world are we living in?

You [Pakistanis] claim that you have missiles, and you will target them, guess what? your missiles are made from their parts, who knows they will work or not? maybe they will work against you, and even blow up here instead. Whoever says we will do this or we will do that is living in a dream world !………..God has given the leadership of the world to them and not you”

The video of him making the statement in the Senate was widely watched across Pakistan and reignited a debate on having diplomatic ties with Israel. Something which Pakistan and Israel came very close to back in 2005.

If there is anything Israel and its citizens can do is to reach out to governments, officials, activists, and policymakers across the U.S. and the Middle East, urge them to stand with Muslims who face oppression at the hands of their own governments. One of the major obstacles that stands between good Jewish-Muslim relations is the extremist clergy which forces governments to restrict religious freedom and in turn shift society towards intolerance and extremism.

About the Author
Founder and Editor of Rabwah Times, a digital media publication focused on Asia. He is actively involved in Human Rights & Religious Freedom advocacy and seeks to use digital media to stimulate better understanding between different communities.
Related Topics
Related Posts
Ehsan Rehan
Comments