Expanding Israel’s contribution to the world means also “What is in it for us?”

The official relations between the state of Israel and the state of California has started early this year, March 2014, when the Prime of Israel, Benjamin Netanyahu hopped on a plane and arrived to meet California Governor Edmund Gerald “Jerry” Brown, Jr. The two men signed a Memorandum of Understanding (MOU), a broad agreement to develop joint projects and conduct mutually beneficial research in California and Israel.

At the Consulate General of Israel in Los Angeles the Consul General, David Siegel and his staff called for a meeting of the press to share and help pass along the meaning of this agreement, which basically is a huge cooperation platform that will increase Israel’s visibility. The MOU is the most comprehensive ever signed between Californian and any country and it opens cooperation between cities and on state level.
The agreement will include SCAG (Southern California Association of Governments) that includes 180 cities, most of them have the need to look into adopting successful Israeli solutions to their growing challenges. 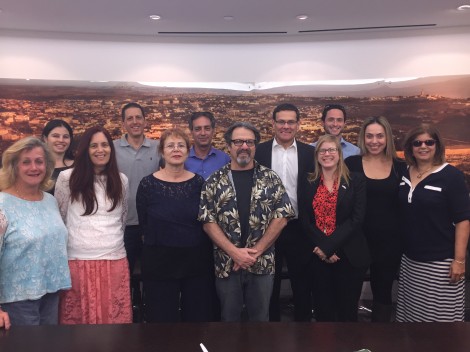 Attendees of the press meeting at the consulate of Israel; Consul General David Siegel in center (white shirt), the writer to the far left, November 2014.

The industry, commerce and employment cooperation will be applicable to water, academic and education, culture, cyber security, science issues among others. It will establish Israel as a partner in a financial hub to get access to office and laboratory space, as well as venture capital.

California is suffering from historic water crisis and Israel, a country with no water that has achieved surplus of water, will assist in ending this crisis. That will include ending the pipe leaks and bursts, which does not happen in Israel. Worthwhile mentioning, at the Carlsbad sea water desalination plant they are using Israeli technology.

There is going to be cooperation between hospitals, pharmaceutical laboratories and research center across the [Atlantic] ocean and the [Mediterranean] Sea.

UC (University of California) System now wants to be a partner in the California-Israel agreement, meaning the pressure of the BDS movement activities on its campuses will ease. Along will also come the CS System and the first one to come on board will be CSun (Californian State University, Northridge.)

HSF (Hispanic Scholarship Fund) is interested in joining the cooperation. What this means, making education available to Hispanic students who have the potential to become leaders and will be positively influenced to support and advocate for Israel.

Israel cannot talk to herself only; she need wider range of audience. Israel’s goal is to go after the silent apathetic majority, those who care less about what is happening around the globe and everything passes over their heads.

As a starter, the Council of the City of West Hollywood has unanimously agreed to cooperate with Israel on the HIV issues. Along that, Israel was the only country to have been invited to partake in Hollywood Progressive Jewish Gay Organization AIDS Day. What does it mean? These are efforts to build relations with the Liberal-Progressives who have no real relations with Israel.

Hollywood has found Israel to be incredibly creative. Today Israel is a major format for TV series. In this arena we will be able to see more Israeli movies and shows, increasing cooperation in filming movies and series in Israel, as well as American adaptations to Israel TV series. One such series is Homeland, an adaptation from the Israeli series “Chatufim=kidnapped”. When filming a movie or a TV series its plot takes place in the Middle East, authenticity is important. The audience sense if the Middle East of the movie is not authentic. Israel will be a good filming place for such movie or series.

Of course, one cannot bring all of Israel to California, so tourism to Israel will be encouraged and promoted as well.

The first exciting news is that from March 2015 till end of September 2015 the ancient Dead Sea Scrolls, found in ceramic jars in a cave in the South of Israel, will be on display in the California Science Center museum, located in Exposition Park, Los Angeles. More exciting, what will be on display are portions of the scrolls that the public has never seen before. With the scrolls, on display will be stones from the Western Wall, the outer wall of the ancient Jewish Temple, in Jerusalem.

What does it all mean? It means to bring Israel to California.

Since the consulate in Los Angeles represents Israel in a total of seven western USA states, this type of agreement can be developed and signed with other states as well.

In a world in which and at no fault of Israel, the Jewish State tends to be disenfranchised and excluded, good marketing and PR could be a good remedy to this situation. The MOU between California and Israel, now being activated and is going into activities gear, will be one step in advancing Israel stand in the world, a successful nation among all other nations.