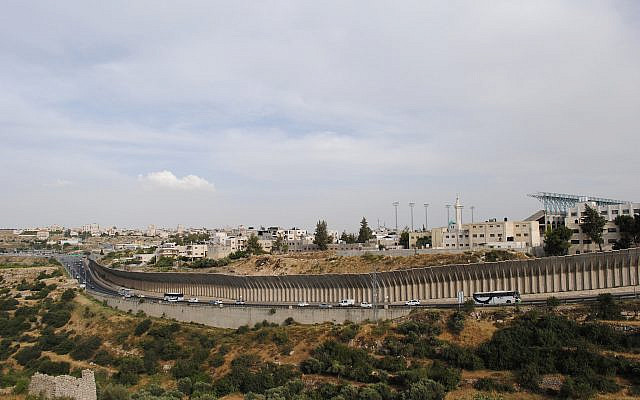 Improvements to Route 60 in the West Bank help both Israeli and Palestinian motorists travel to their destinations. (Dexter Van Zile)

Journalist Judith Sudilovsky has been covering events in the Holy Land for a long time. Her byline has appeared in a number of religious publications, Catholic outlets especially. Her articles have been published by the National Catholic Reporter, the Catholic News Service, and the Southern Cross, a Catholic newspaper that serves Southern Africa. She has also written for 972, a publication that caters to the Israeli left.

For the most part, Sudilovsky’s articles reveal a critical — but not overtly hostile — approach to Israeli actions in the Holy Land. They also reveal a strong tendency to ignore Palestinian misdeeds. That’s the narrative her publications want from her and she gives it to them. They want a story that obliquely blames Israel for suffering in the Holy Land, but without the ugly polemics deployed by obviously anti-Zionist cranks.

Still, in the soft narrative Sudilovsky tells about Israel to her Christian readers outside the Middle East, the Jews’ right to live in the Holy Land is contested while the Palestinians’ right to live there — and harass Jews while so doing — is uncontested.

In this type of journalism, the story is that whenever a Jew sticks a shovel into the ground in the Holy Land — no matter where and for whatever reason — a Palestinian suffers. This impulse informs the journalism practiced by Sudilovsky and many of her colleagues in the Holy Land.

This narrative was particularly evident in an article published by the Jesuit-run America Magazine on Oct. 15, 2020. The article’s title is instructive: “The little town of Bethlehem is slowly getting smaller because of expanding Israeli settlements.” Journalists regularly complain about headlines, but with this one, Sudilovsky doesn’t have much to complain about. It states a falsehood but accurately informs readers of her story’s message.

In Sudilovsky’s distorted word-map of the West Bank, which has no real connection to the map-map (to coin a phrase) of the area, Jewish construction outside of Bethlehem somehow magically deprives the city of Jesus’s birth of its territory. Maybe there’s some sort of a pipeline installed by nefarious black-hat Jews in the West Bank that works this evil magic.

The fact is, every one of the settlements and acts of construction that Sudilovsky discusses in her story is located outside the city of Bethlehem, which is a metropolis compared to its neighboring towns and municipalities.

Nevertheless, readers are supposed to believe that the construction of homes outside of Bethlehem and badly needed road improvements, which will make life much easier for Palestinians in the West Bank, somehow diminishes the city of Christ’s birth.

Sudilovsky begins her distorted narrative by recounting the story of Mr. Abu Eid, a Greek Orthodox Christian who lost access to his fruit orchard in what she describes as the “Al Makhrour area of the largely Christian village of Beit Jalla.”

“Village” is an interesting word to use to describe Beit Jalla, which with a population of approximately 13,000 people is incorporated as a city under the Palestinian Authority. Its city council has historically been populated with supporters of the PFLP, a terrorist organization.

Residents of nearby Gilo, a Jerusalem neighborhood, were terrorized by snipers shooting from buildings in Beit Jalla during the Second Intifada (a fact left out of Sudilovsky’s story).

In response to the sniper and mortar attacks, which emanated from Christian-owned property in the city, the Israeli government was forced to erect a wall to protect its citizens in Gilo who suffered terribly during these attacks.

It greatly improved the property values of apartments in Gilo. Information like this would give readers some context as to what is at stake for Israelis living near Beit Jalla, but Sudilovsky omits it.

Sudilovsky reports that Abu Eid has lost three acres of his family’s property in Al Makhour valley and now has only one acre left. The land was confiscated, she writes, to make way for settlement construction and a tunnel road that will connect Jerusalem and Gush Etzion.

Sudilovsky doesn’t provide any dates about when Abu Eid’s land was confiscated, nor does she tell readers if he was compensated for the loss of his property. If Abu Eid had strong title to the land, he would very likely have been compensated, but if he had been compensated, it would undermine the premise of Sudilovsky’s story.

This raises a few questions. Was he or his family compensated for the loss of their land? Just what type of title did Abu Eid’s family have to the land? Were there any lawsuits regarding the confiscation?

There’s more. Israeli officials have been debating whether or not to proceed with the construction of homes in Givat Eitam for many years. Sudilovsky’s readers might want to know that part of the recent impetus for the construction in Givat Eitam was the murder of Ari Fuld at the hands of a Palestinian teenager during the stabbing intifada in 2018.

If Sudilovsky were truly interested in reporting on events in the Holy Land, she might have told her readers about Givat Eitam’s connection to Ari Fuld and about Beit Jalla’s connection to sniper attacks against Gilo. When Israelis hear the names Beit Jalla and Givat Eitam, this is what many of them think of.

There is one other egregious omission. The tunnel road that Sudilovsky mentions, but does not describe, will make it much easier for Palestinians living in Bethlehem and its suburbs of Beit Jalla and Beit Sahour to drive into the southern part of the West Bank.

Under current conditions, Palestinians living in these municipalities have to drive through several back roads to get onto Route 60, which is regularly afflicted with terrible traffic jams as Israelis drive from their jobs in Jerusalem to their homes in the West Bank. It’s also currently very difficult for Palestinians living in Bethlehem, Beit Jalla, and Beit Sahour to get on the road to go south, says Brian Schrauger, an American journalist affiliated with USA Radio Network currently living in the Holy Land who is quite familiar with the area.

The upshot is a simple one. “There’s no ‘encroachment’ on Bethlehem at all,” Shrauger says.