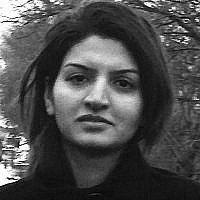 The Blogs
Syeda Maida
Apply for a Blog
Please note that the posts on The Blogs are contributed by third parties. The opinions, facts and any media content in them are presented solely by the authors, and neither The Times of Israel nor its partners assume any responsibility for them. Please contact us in case of abuse. In case of abuse,
Report this post. 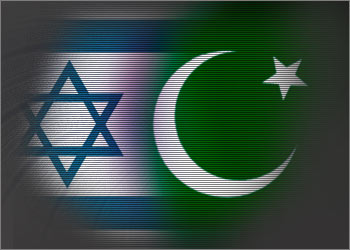 Pakistan has maintained its identity for the world, unfortunately, a pretty fundamentalist Islamic state rather than a secular. Pakistan being an Islamic state restrict its citizen from visiting Jerusalem irrespective Al-Aqsa mosque is there and in Islamic traditions the reward of praying at that mosque is immense(countless).

“This passport is valid for all of the countries of the world except Israel.”

Israeli authorities don’t even give a shit about this particular note on Pakistani Passport as they can issue a paper visa and put all of the entry-exit stamps on that visa. Someone can apply for an Israeli visa in a consulate in another country. I believe it is obvious state-sanctioned anti-Semitism.Someone can travel to Israel with a particular passport or not It is a decision for Israel to make, as any other sovereign country.

Someone can travel to Israel with a particular passport or not It is a decision for Israel to make, as any other sovereign country.Anti-Jews sentiments are being done mostly by people(clergy and politicians)who do have other agendas. Politicians trying to shift the focus of his people from things that could cause internal damages. Most educated people understand this and basically laugh it off. But the uneducated masses are vulnerable to outcries of solidarity and often can do no better than copy the sentiments relayed by their clergymen.

Anti-Jews sentiments are being done mostly by people(clergy and politicians)who do have other agendas. Politicians trying to shift the focus of his people from things that could cause internal damages. Most educated people understand this and basically laugh it off. But the uneducated masses are vulnerable to outcries of solidarity and often can do no better than copy the sentiments relayed by their clergymen.

If all Pakistani only wait until the peace agreement between the Israelis and Palestinians is signed – unlikely to be seen in the near future – then we will pretty much hand over the open field for Indian Israeli relationships which India is keen to develop on a silver platter as it wishes.
Pakistani equate Palestinians with Muslims and Jews with Israeli and Palestinian and Israelis have been in a state of conflict for almost a century now,but most of the Pakistani do not know that Israel holds excellent relations with one strong Muslim country.

Turkey.The Turk does have good and historic relations with Israel.
Turkey has diplomatic relations with Israel since the Ottoman state recognised the Jewish State in 1949. Israel has maintained two diplomatic state of missionaries in Turkey, an embassy in the capital city of Ankara,and its Consulate General is in Turkey’s largest city Istanbul.
Why not Pakistan can build a staunch relation with Israel Only because the government of Pakistan can’t in a position to bring all parties to the table for Israel and Pakistan issues. Doctrine takes ages to lose its effects but Pakistanis should not be deprived of the experience of Israeli land.

Pakistan seems isolated and will remain democratically threatened if its foreign policies can’t review or change. For a progressive country, Pakistan needs to open both eyes for the Aerial view about the cooperative relationship as a strategic imperative with the other world. Pakistan somehow to fear that close relationship with the Jewish state might radicalise its Muslims citizens and hurt its relations with the Arab but it is a state of denial. Educated Pakistan is well aware of the international relations policies and they are always up for the better future of Pakistan. If Pakistan would develop constructive diplomatic relations with Israel, which means – embassies, trade, tourism, and maybe even military cooperation against terrorism. It is possible to have such relations even without agreeing about politics: as an example, Israel is not so happy about Russia supports its political opponent Palestine and Syria,but both countries still have rather constructive, even if somewhat tense, diplomatic relations.

One more important moot point is Pakistan and Israel both are allied to the same country (United states).

The idea of recognising Israel toyed with Pakistan’s two military dictators Zia-ul-Haq and General Musharraf but they got cold feet in the end”.

During President Musharraf’s tenure, Pakistan came close to recognising Israel when the heads of states from both countries met in Turkey. Israeli Mossad also worked closely with the Pakistani ISI to ensure Musharraf’s safety and at least one assassination attempt against Musharraf failed, thanks to Israeli origin jammers placed under his car which prevented an IED from detonating under a bridge along his route until his car had safely traversed the bridge.

Pakistan is also no friend of the Palestinians and despite token diplomatic support and a paltry 5 million in nonlethal aid, Pakistan has also faced crushed Palestinian resistance on certain occasions with such brutality that even the most stone-hearted Zionist must have felt a twinge of empathy. It was the time between the 70s and 80s when General Zia was crushing the Palestinians and he was the President of Pakistan during the Afghan war.

Some international commentators have stressed Pakistan is an internationally isolated state. I would say we’re more controversial than isolated. Israel is much superior to Pakistan in terms of military techs and has protection and backing of world powers. Pakistan has numbers (Even though they are highly unskilled) and the large area of control, China who is close friend or allies of Pakistan also has vested interest in Israel as it grants China access to US techs without actually having to deal with US and China is in desperate need of it.

One more thing Israel has over Pakistan is Israelis are highly educated and the intern has good standing in governments around the globe. Pretty much everyone one from the US to Japan would be ready to help them as they are related to lobbying mechanism. Unfortunately, can’t say the same about Pakistan, more than 46% are not even literate, and the ones who are, are on average so bad that they have difficulties finding even jobs, especially given the fact that Pakistan’s education system breeds hatred towards non-Muslims.

On the other side of the story historian believed are unlikely far different.

They claimed historically that Prophet of Islam travelled to Medina in 622 A.D.to attract followers to his new faith. When the Jews of Medina refused to convert and rejected Prophet of Islam (Muhammad Ibn-e-Abdullah), two of the major Jewish tribes were expelled; in 627, Muhammad’s followers killed between 600 and 900 of the men, and divided the surviving Jewish women and children amongst themselves.

In the early years of the Islamic conquest, the “tribute” (or jizya), paid as a yearly poll tax, symbolised the subordination of the dhimmi. Later, the inferior status of Jews and Christians was reinforced through a series of regulations that governed the behaviour of the dhimmi. Dhimmis, even on pain of death, were forbidden to mock or criticise the Koran, Islam or Muhammad, to proselytise among Muslims or to touch a Muslim woman (though a Muslim man could take a non­-Muslim as a wife).

Dhimmis were excluded from public office and armed service and were forbidden to bear arms. They were not allowed to ride horses or camels, to build synagogues or churches taller than mosques, to construct houses higher than those of Muslims or to drink wine in public. They were not allowed to pray or mourn in loud voices as that might offend the Muslims. The dhimmi had to show public deference toward Muslims-always yielding them the centre of the road. The dhimmi was not allowed to give evidence in court against a Muslim, and his oath was unacceptable in an Islamic court. To defend himself, the dhimmi would have to purchase Muslim witnesses at great expense. This left the dhimmi with little legal recourse when harmed by a Muslim. Dhimmis were also forced to wear distinctive clothing. In the ninth century, as an example, Baghdad’s Caliph al-Mutawakkil designated a yellow badge for Jews, setting a precedent that would be followed centuries later in Nazi Germany.

So Dhimmitude is an anti-Semitic tradition of Islam instituted by the founder of Islam Prophet Muhammad himself.

The term “anti-Semite” was coined in Germany in 1879 by Wilhelm Marr to refer to the anti-Jewish manifestations of the period and to give Jew-hatred a more scientific sounding name.” Anti-Semitism” has been accepted and understood meaning hatred of the Jewish people.

By the twentieth century, the status of the dhimmi in Muslim lands had not significantly improved. More than a thousand Jews were killed in anti-Jewish rioting during the 1940’s in Iraq, Egypt, Libya, Yemen and Syria. This helped trigger the mass exodus of Jews from Arab countries.

Now Jews have established an independent homeland. They stand strong and proud — not subjugated and taxed. In 1948 Israel emerged as the world’s only Jewish State and is the Middle East’s only liberal democracy. Today, more than eight million people Jews, Muslims, Christians call Israel home.

Arabs or Muslims consider all these historical points as a blatant lie which Jews propagated for hiding their inhumane military actions on Palestinians and they strongly believed on moral pronouncement on Palestine. Religious clerics teach the masses that Jews have occupied Muslims’ holiest lands and that the rightful owners of those lands – the Palestinians – don’t get their rights. Mullahs (supported, funded and inspired by Saudi Arabia and Iran) are the ones who control Pakistan,”

Whatever peaches colour was behind the enmity of Jews or Muslims but both parties should try to come to the table as it’s not the era of a sword, even if the possibility of a change is going to be different. Situations may change depending on the flow of global politics in the future, Pakistan should follow its neighbour India’s footstep(Be aware of the fact that India’s has larger Muslims population than Pakistan)and establish ties with all international and regional players, including Israel.

The diplomatic bilateral relationship between Pakistan and Israel is feasible as geographically both countries are so far apart that they have literally nothing to fight at all. No water issues like the ones Israel has with Jordan and Lebanon and we do with India. No border disputes. The political parties in Pakistan that are opposed to Israel due to religious issues have never been voted into power. All of the leading political parties of Pakistan are largely secular and they need to more focus on economic themes.

Moderates In all Political Parties should create a tolerant healthy discussion forum on national assemblies and should take active steps in changing the education system and biased media. Both countries could pose as mediators. Pakistan can mediate between Israel and the Palestinians, whereas Israel can exert influence on India in the Indian-Pakistani dispute over Kashmir. These plans are feasible not a fantasy, nothing is immutable neither unchallengeable. If Pakistan wants to write down its name in the list of world’s top nations than we can’t blot of this world. Pakistan comes first than any religious bigotry.

About the Author
Syeda Maida is Pakistani origin based in United kingdom. She is a business graduate but has a keen interest in international politics around the globe. Writing is her passion and She would love to create awareness in her Pakistani communities about the existence of Israel.
Comments