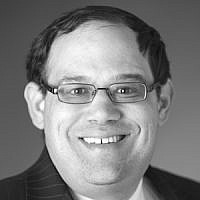 Israel’s amazing run at the World Baseball Classis was bound to end, sooner rather than later, but the interest and attention the “Cinderella” team of the 2017 WBC has garnered is fascinating. Even Team Israel’s mascot, “The Mentch On The Bench” has become a bit of a folk hero of late.

One of the more popular jokes making the rounds on social media is about how the UN Security Council stood ready to condemn Israel for winning, which in geopolitical terms is usually seen as a “disproportionate response” by the Israelis.

We all seem to love an underdog that outperforms and does so much more than expected.  It is easy to see why Israel’s team of has-beens and no-name players qualifies as an underdog, but I can’t help being struck by the intense irony; the story of Israel itself is one of the greatest underdog tales in history!

I know what you are thinking. I understand that the world media narrative portrays the Palestinians as hopeless underdogs outmatched by the vastly superior Israel military, but that narrative is about as real as Team Israel’s mascot.

The true story of Israel is about a vulnerable fledgling state built on the ashes of the Holocaust, desirous of nothing but peace and living under the constant threat of annihilation by its vastly superior neighbors. At least four times, Arab armies from multiple surrounding countries attacked Israel with the hope of killing all of its citizens.

And yet, vastly outnumbered and facing enemies that were better equipped and funded, Israel, an underdog whose very survival depended on its victory, beat back its enemies.

Thankfully, and as a direct result of David beating the proverbial Goliath, Israel does not live under an existential threat at the moment, but she can never let her guard down for a moment.  She is still surrounded by enemies and rouge states like Iran and Syria who would destroy her in an instant if they felt they had the chance.

As to the media narrative, the truth is that Israel has done everything possible to make peace with her neighbors and to try to create a peaceful coexistence with the Palestinians. Sadly, their generosity has been met with nothing but terror and disdain.

People forget, but Israel unilaterally withdrew from Gaza to create a Palestinian State in 2005.  She removed all of her citizens and even uprooted and reinterred the bodies in its cemeteries hoping beyond hope, that their goodwill would be the impetus for peace.  Instead of earning her just rewards, Israel has paid dearly for her generosity. Gaza has become a terror haven and a base for launching rockets attacks on the Israeli populace

Gaza is not alone.  Just this week, a Jordanian soldier who killed seven Israel schoolchildren in cold blood 20 years ago is receiving a hero’s welcome upon his release from jail.

While Israelis may not have to fear their annihilation, the population lives under the constant threat of terrorism in which every bus ride, afternoon walk or trip to the grocery store can be the last.

I am glad that Israel’s baseball team has received such wide support for its underdog and implausible run in the World Baseball Classic, but truth be told, baseball is just a game. The stakes are much higher for Israel itself. It is important for everyone to understand that Israel is the true underdog and its existence is implausible if not miraculous. It truly deserves the world’s sympathy and support.  Make no mistake about it; with neighbors like Syria, Iran and Gaza, Israel has been the ONLY “Mentch” on the Middle East bench for close to 70 years!

About the Author
Chaim Shapiro is the Director of the Office for Student Success at Touro College, a freelance writer, public speaker and social media consultant specializing in LinkedIn. Chaim was the Hillel Director at the University of California, Riverside between 1999-2003, fighting and advocating for Israel when the current anti-Israel campus campaign was in its infancy.
Comments