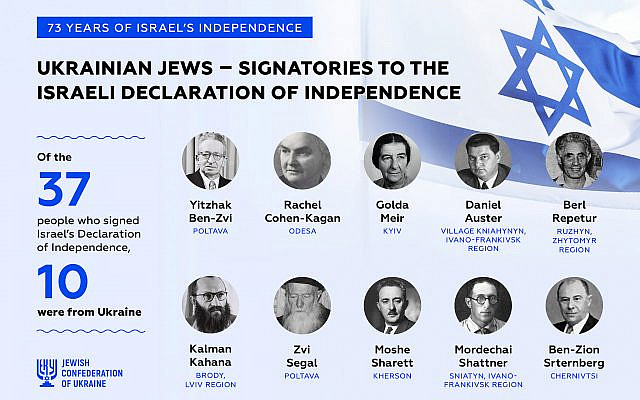 Ukrainian jews - signatories to the Israeli Daclaration of Independence

“Pioneers, defiant returnees and defenders, they made deserts bloom, revived the Hebrew language, built villages and towns and created a thriving community controlling its own economy and culture, loving peace but knowing how to defend itself, bringing the blessings of progress to all the country’s inhabitants, and aspiring towards independent nationhood,” reads the Declaration of the Establishment of the State of Israel, which today turns 73 years old.

Among the pioneers referred to in the Declaration, there were also many Jews who came from the territory of current Ukraine. The Declaration itself was signed in the former house of the first mayor of Tel Aviv, Meir Dizengoff, a significant part of whose life was associated with Ukraine.

The Dizengoff House is located in the square named after born in Zhytomyr Zina Dizengoff, the mayor’s wife, who made Tel Aviv the cultural capital of Israel. The love story of Meir and Zina is legendary in Israel.

They first met in Zhytomyr at the meetings of the revolutionary-minded Jewish youth, when Meir, an officer of the tsarist army, was 22, and Zina was 11. Zina, who perfectly played piano, was brought to the circle of revolutionaries by her elder sister for the sake of conspiracy. Zina’s piano playing was supposed to create the appearance of music lessons while the adults were discussing the future of Russia and Jews.

When Zina grew up, Meir’s attitude towards her grew from being friendly to much more. In 1894, during the construction of a glass factory in Palestine, where Dizengoff was invited by Baron Rothschild, the daughter of an Arab sheikh fell in love with Meir. Her feelings were so strong that the sheikh offered Meir his entire fortune, if only he would marry his daughter. But Meir replied that he already had a bride.

Soon Meir and Zina got married and settled in Palestine, where on April 11, 1909, they received the 43rd plot on the coast near Jaffa out of 66, disposed by lottery among the families of the future Tel Aviv. In the house built on this site, an independent Jewish state was born in 1948.