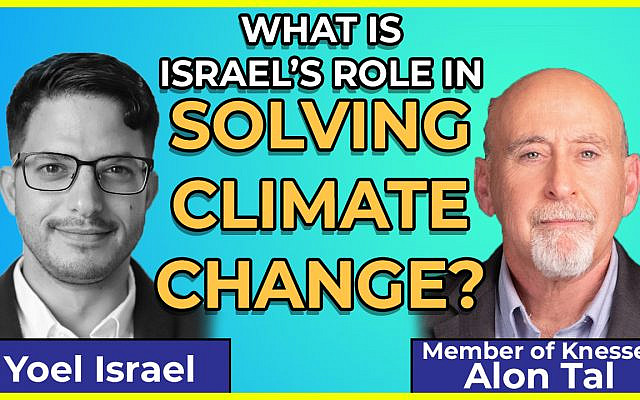 When you’ve already dedicated your life to saving the environment, studied for and received a doctorate in environmental science at an Ivy League university, and written two books about pollution and overpopulation in your chosen homeland, what else can you do to further your cause? Alon Tal decided to become a politician.

A Harvard graduate and noted environmental activist, Tal is known for co-founding Israel’s the Green Party in 2008, and 11 years later he joined Benny Gantz’s Israel Resilience (“Hosen L’Yisrael”) party. In 2021, he became a member of Knesset, and in the time since has submitted a number of bills, including the State of Nature Report Law, a new Forestry and Tree Protection Law, and Amendments to Israel’s Coastal Environment Protection Law, Cleanliness and Class Action Suit Law.

An environmentalist myself, I asked Tal to speak with me on my podcast, Israel Unfiltered, as I was interested in comparing and contrasting our approaches to the ideology. We discussed a number of topics, including the debilitatingly binary nature of American politics (and whether Israel is headed in a similar direction); whether it’s ever all right to limit free speech; the invasion of Egypt’s Myna birds and the health of Israel’s eastern bodies of water; and if it’s right to refer to the change in global temperatures as a climate “crisis,” when that change is so gradual and technology is improving so rapidly that it will surely outpace the heat in terms of development.

While Tal called that belief “Pollyannic and falsely-optimistic,” citing the tragic deaths of 50 people in a building in Cairo dying from rising temperatures, he had little response to me bringing up that, on a global scale, more people die every year from cold than they do from heat.

We also discussed what Israel can do to help combat climate change (and if it’s even obligated to help at all, given its relatively diminutive contribution to global warming). “There is a group of people in Israel that I deal with not infrequently, even in the Knesset — surely the ultra-Orthodox parties make that ‘we’re so small, what does it matter’ argument all the time,” said Tal.

“The international community has gotten under the proverbial stretcher to carry this sick Earth to a healthier place — and those of us who were in the army know that there’s always one or two soldiers who always find excuses not to get under the stretcher, and we know what kind of people they are. They’re not the kind of people we want to be neighbors with. That’s not what I want my Jewish state to be,” he said. “I want my Jewish state to step under the global proverbial stretcher and do its part.”

To hear more from my conversation with MK Alon Tal, check out this week’s episode of Israel Unfiltered: LINK

About the Author
Yoel Israel is a digital marketing and real estate investor, with a passion for liberal Zionism. Yoel provides an out-of-box perspective and unique interviews about Israelis in the culture. Yoel lives with his wife and daughters in Pardes Chana. He is the founder of WadiDigital.com, Cyfluencer.com, and IsraelUnfiltered.
Related Topics
Related Posts