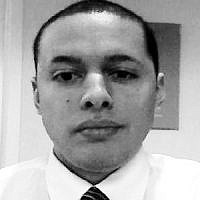 The Blogs
Abdel Bioud
Apply for a Blog
Advertisement
Please note that the posts on The Blogs are contributed by third parties. The opinions, facts and any media content in them are presented solely by the authors, and neither The Times of Israel nor its partners assume any responsibility for them. Please contact us in case of abuse. In case of abuse,
Report this post.

According to Wikipedia, a Zombie is a mindless corpse (at this point, the Hamas people are dead men walking) with a hunger for human flesh (and they try to kill any human, civilian or not). As far as I’m concerned, Hamas and their buddies fit perfectly this description. The problem with this is, Israel is not only facing Islamist Zombies, but she’s also facing the other Zombies around the world, commonly known as the international community (i.e. the UN).

Internationally, Israel’s image is not seen as positively as say, Disneyland (I just realized that Walt Disney, the founder of Disneyland, was a known anti-Semite!). Even worse, in the international sympathy battle, Hamas usually gets the upper hand (thus the outcries for Israel to stop defending itself). Why is that?

My guess would be that everyone loves an underdog. The problem is, if that dog has rabies, and wins the battle, he’ll spread the disease (the disease being the psychopathic radical Islamic ideas, i.e. Zombie behavior).

Now I know, my non-Jewish and non-Israeli friends will tell me that I’m being insensitive, and that Hamas is only defending its people. That’s the usual narrative. What my non-Jewish and non-Israeli friends (and non-friends) have to realize, is that Hamas is not fighting for freedom and liberty, while Israel is some sort of dictatorship trying to take over the place. It’s the complete opposite. Don’t believe me? Let’s look at article 7 of the Hamas Charter:

“The Day of Judgment will not come about until Moslems fight the Jews (killing the Jews), when the Jew will hide behind stones and trees. The stones and trees will say O Moslems, O Abdulla, there is a Jew behind me, come and kill him. Only the Gharkad tree, (evidently a certain kind of tree) would not do that because it is one of the trees of the Jews.”

I mean, how crazy is that? I’m Muslim and I feel like this is f****** crazy!  I’m sorry, but I can’t find another word to describe this absurd passage.

That being said, the question remains. How will Israel win the international communication battle, when she’s facing all those Zombies and their sympathizers?

When I look at what Israel has done, I have never seen a country that takes so much precaution to avoid civilian casualties. Usually, when you have a conflict, asymmetric or not, it’s a full blown exchange on both sides, with no regard to civilians. Israelis should be proud of this fact and proud of their army and the values that it stands for. Israel’s military is literally leading the way in the long battled fight for human dignity. And remember, Israel is defending itself, she didn’t start the conflict.

With this in mind, one have to ask, why doesn’t Israel receive more support internationally? Don’t people around the world love freedom and liberty? Don’t these people realize that if they lived under a Hamas government, they would hate it and would probably start a revolution? Why is there such a disconnect? Is it because the anti-Israel bandwagon is popular? Maybe. The answer, in my opinion, lies with the type of government these people live under.

When you analyze human history, you realize that a functioning government that respects and promotes individual rights and liberties is a rare thing. Even today, the vast majority of human beings still live under criminal/psychopathic governments. What effect does it have on the human brain to live under such a system? Can you grow to be a normal, well balanced person? Of course not. Just look at all those artificial Arab countries. All the people living there despise their own government, seeing them as corrupt and incompetent. Yet, when those same phony Arab governments tell them that Israel is bad, they buy it. How can a rational person fall for this? The simple answer is that the majority of the Arab population has a broken brain. Good luck trying to be a healthy brain (i.e. sane person) in an Arab country. Like Zombies, they will see you as a fresh brain and will come after you. Being sane makes them realize their brokenness and they don’t like it.

So, Israel can’t count on the support of the majority of Arabs. Even though I am Arab, I don’t kid myself. What about the rest of the world? Our liberal friends across Europe and America are usually anti-Israel. Obviously, no surprise here. From my experience here in Canada, liberal minded people, are the people who import criminal immigrants into the country, while they live in the most expensive neighborhoods (i.e. they don’t get to see the output of their decisions). Their disconnect between their crazy economic/social fantasies and reality, explains why they don’t support Israel. It follows the same decision pattern.

What to do then? The only sane and right thing to do is to simply stick to your guns. Continue to live by your values, even if it’s hard at times. In the long run, it will pay off. With social media today, Hamas and the like can’t hide their true nature any longer. Eventually, sanity will prevail and the world will be on Israel’s side.

About the Author
Abdel is a graduate student at McGill and the is the vice president of communication for the McGill Students for Israel association.
Comments