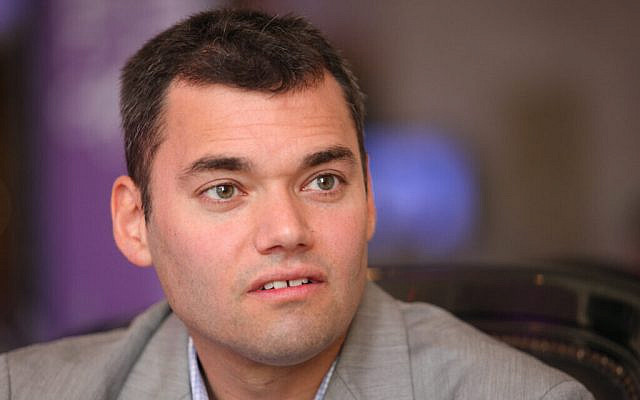 Beinart Peter is a well known journalist and writer who is currently in Israel for the prsidential conference. June 21 2012. PHoto by Flash90

This is a moment of angst in Zionist circles. The spark is a small wave of disavowals of the Jewish state idea by liberal American Jewish journalists. The bigger reason is a sense that the US Democrats may return to power in a contrarian disposition toward Israel, because of its awkward love affair with Donald Trump.

Unlike some angst, this case has good cause.  America’s support provides Israel invaluable protection from sanction as it pursues policies opposed by most of the world.  The influential US Jewish community has been a big factor in maintaining it, as has been the bipartisan nature of US sympathy.

Israelis often assume the outside world lacks nuanced appreciation of their challenges, and they’re not necessarily wrong. But experts – and we all are all expert about our own problems – can overthink and miss the essence. The essence is that support for Israel in respectable international circles cannot prosper if it continues on its current path.

The central fact is that despite the 1990s establishment of an autonomy government in pockets of the West Bank containing most of its population, the Palestinians are in effect ruled by Israel without being given the right to vote for its government. Indeed about a quarter of the effective population thus  cannot vote.  If Gaza’s two million Palestinians are counted (they say they remain occupied because of Israeli domination and blockade despite the 2005 pullout) the proportion under Israeli dominion denied the vote would be almost 40%, and the share of Palestinians in the population overall, including Israel’s two million Arab citizens, would be half: 14 million people in one unholy mess, equally divided between Arabs and Jews.

One reason Israelis tell themselves this is OK is because the West Bank was never formally annexed, even though since capturing it 1967 Israel filled it with towns exclusively for Jews.  The sleight of hand at work here is reflected in the fact that while Israel has no absentee balloting the settlers can vote for the Knesset, unlike their Palestinian neighbors. A dispassionate observer would be hard pressed to call this  democracy. The ability to maintain world support depends on this outrage bring temporary – on Israel seeking partition.

But Israel’s governing Likud Party viscerally opposes partition as do the religious party allies.  Prime Minister Benjamin Netanyahu’s personal opposition predates the Palestinian terrorism which now provides him with useful cover. When I first interviewed him in 1988 (for the Jerusalem Post), he was simply arguing (oddly) that there are not enough Palestinians to justify Israel abandoning the land. When I interviewed him weeks before his election in 1996 (for the Associated Press), he predicted the Palestinians would suffice with autonomy in the manner of the (now restive) Catalans of Spain (who are citizens).

Despite this, Likud leaders knew enough to pretend otherwise when expedient. That is why Menachem Begin agreed to negotiate Palestinian autonomy in the 1979 Camp David Accords with Egypt. When Yitzhak Rabin’s Labor government actually made good on this promise in the early 1990s, Netanyahu agitated against it, leading an opposition frenzy that ended with Rabin’s assassination; but when he won the premiership shortly thereafter, he pretended to continue the process (while doing much to undermine it). When Netanyahu returned to power in 2009 after a decade out of power he initially made statements suggesting he was opposed to eternal rule over the Palestinians; but  since then he has done all he can to create an environment of suspicion and negativity. Today Netanyahu is no longer even pretending.

A desire to hold on to the West Bank is not insane. It is strategic highland that can plausibly be seen as part of the same natural geographical entity as Israel proper – the  land “between the (Jordan) river and the (Mediterranean) Sea.” And the moderate Palestinian leadership cannot comfortably be trusted to not bumble away any full control it might be given to terrorist gangs, as occurred in Gaza.

Many Palestinians quietly support Option 2 because they assume it cannot last and will lead to Option 3. They calculate Isael will be treated eventually as an apartheid state and will collapse amid violence, boycotts and Palestinian demands for the vote. I assess they are correct, and that their strategy is way more intelligent than that of the Israeli right.

The currently kerfuffle comes as a pair of prominent US Jewish journalists came out for Option 3, but without the period of strife.

Peter Beinart, veteran critic of the occupation but also a well-known Zionist, several weeks  ago wrote an oped entitled “I No Longer Believe in a Jewish State” in the New York Times.  The painful truth is that the project to which liberal Zionists like myself have devoted ourselves for decades — a state for Palestinians separated from a state for Jews — has failed,” he wrote. “It is time for liberal Zionists to abandon the goal of Jewish-Palestinian separation and embrace the goal of Jewish-Palestinian equality.”

Beinart found an important defender in Max Strassler, who was earlier this year appointed to oversee international opinion writing in the New York Times and who tweeted approvingly that “before too long (Beinart’s view) will be mainstream opinion among American Jewish liberals.”

Is non-Zionism indeed their future? Studies reflect the muddle that has overtaken much of politics.  One recent survey, by the Ruderman Family Foundation, was reported as suggesting a growing drift with Israel by liberal US Jews – but also showed a continuing majority support and growing backing among the Orthodox.

Trump clouds the picture: Israelis support him at unnatural levels due to his amazingly partisan approach in their favor on the Palestinian issue – which seems to be repelling the majority of US Jews who oppose Trump on other grounds. Only when Trump is gone will some clarity emerge, and the picture will include troubling aspects unrelated to the Palestinians.

To begin with, even Israel proper is enroute to being an authoritarian semi-democracy like Hungary and Poland. The government is at loggerheads with the courts, the police, critical media, and most of the intelligentsia.  The electorate has failed to unseat a leader facing trial for serious corruption, has more skeletons closeted away, and viciously attacks the legal system. There is a strong whiff of mob rule by majority vote.

Moreover, this populist authoritarianism is not an awkward fit in a country whose population descends mostly from Jews with recent roots in Eastern Europe and the Arab world, no beacons of liberalism. That there was solid democracy within Israel proper was a miracle, but Netanyahu finds a willing audience for subverting it.

All that is desperately opposed by a minority but forms, by reasonable measures, one of the most advanced societies on earth. That is the Israel its admirers treasure: a place of incredible innovation in high tech, science and medicine; of vibrant culture and cuisine; which manages to hang on to high international rankings along key per capita indicators from patents to GDP to book publications.

Liberal Israel is also in a cultural war with an ultra-religious population that enjoys very high birthrates and is rewarded with theocracy-friendly policies that include a banishment of civil weddings, impediments to commerce and public transport on the Sabbath, draft exemptions for legions of seminary students and state funding for schools that on principle lack a curriculum of science and math.  The whole thing could end in tears – and emigration of the liberals.

It is probably a matter of time before this looming train wreck starts to define Israel worldwide. About the only way out is for the opposition to decisively win the next election and brutally change course in ways that might risk civil war.

Considering where they appear to be headed, Israelis are wise to be mindful of what they face with a Democratic Party which can be expected to receive three-quarters of the Jewish vote this November and appears headed for a long-term  American majority. Its moderates still hold sway, but a young generation eager to rip up former compromises is gaining ground by the day.

How likely are America’s millennials, skewing far to the left of their elders, to continue  backing Israel automatically? How close will they feel to the version of Israel represented by authoritarians, settlers and religious fanatics – and abandoned even by many US Jews? How likely are they to back Israel when the Palestinians put aside their statehood dreams, demand equality and are denied?