While many people in Israel and Palestine (and abroad) have given up on peace and fallen prey to apathy and despair, hundreds of Jewish Israeli youth and Palestinian young people – and many of their parents – are encountering each other this year and acting for peace via Kids4Peace, an international NGO with headquarters in Washington DC.

The local Jerusalem branch is led by two dynamic young directors, Meredith Rothbart , a Jewish Israeli (originally from Allentown, Pennsylvania, who made aliyah in 2008) and Tareq Samman, a Palestinian Muslim who is native to Jerusalem. Recently, I went to talk to them in their offices in the Sheikh Jarrah neighborhood of Jerusalem, which also serves as a meeting space for many of their encounters between Palestinian youth –Muslim and Christian– and Jewish youth from all over  Jerusalem. Throughout our conversation, I was impressed by their commitment and enthusiasm for their educational and activist work, a rare phenomenon today amidst the ongoing conflict and crises that we read about in Jerusalem every day. 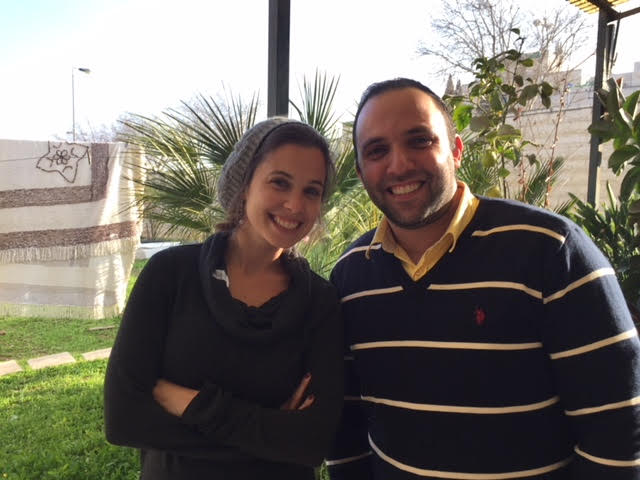 ​Rothbart made aliyah to Israel in 2008 after completing university and went straight to a seminary in Jerusalem​ called Nishmat where she learned Torah full time for a year. While awaiting her draft to the IDF that following summer, she volunteered​ with Kids4Peace, when a family friend asked her to be a counsellor for a Kids4Peace camp in North Carolina. At camp, she met Palestinian youth for the first time, and realized that she knew very little about them. She came back to Jerusalem and postponed her draft a few months, fighting to be placed in a role where she can learn more about the conflict from inside. After serving in the Civil Administration’s branch for International Organizations in Beit El, Meredith decided to ​study for a master’s degree in Community Development at the Hebrew University. Throughout this period ​she worked for Rabbi Michael Melchior, who is one of Israel’s most prominent religious peace activists. It was her studies that led her back to Kids4Peace, where as part of her mandatory internship she planned and implemented a Kids4Peace​ alumni event to celebrate 10 years since the founding of the organization and 300 people came. After serving in a variety of capacities, she was appointed Acting Director in January 2017, and recently became Co-Director.

Samman grew up in the Wadi El Joz neighborhood of Jerusalem, and  he now lives in Shuafat. He studied Sociology Education for one B.A. at the Hebrew University  and Hebrew Language for another B.A., and became  a teacher of Hebrew for Palestinian children in Jerusalem. In addition, he participated for several years in dialogue and action programs of the Interreligious Coordinating Council in Israel (ICCI), an organization which I directed for 25 years, and he served on the staff of ICCI. Following these life-transforming encounters, he studied for a dual master’s degree in Conflict Resolution and Coexistence  as well as Sustainable International Developmentin the Heller graduate school, at Brandeis University in Waltham, Massachusetts. Last August, he began an internship at Kids4Peace, and after a short period, was appointed co-director with Rothbart of the Jerusalem office.

Rothbart and Samman are now a dynamic duo, leading the largest interfaith youth encounter movement  in Israel/Palestine. They are both extremely positive and hopeful about their work and approach it with thoughtful and creative energies.

When I asked Samman what he likes about serving as co-director of Kids, he told me:

I can keep my identity as a Palestinian and work for my community. I feel connected to the people here. And, it is hard to find an organization these days in Jerusalem which is committed to peacebuilding. I like working here because this is a place where we help to empower Palestinian identity, as well as identity for Jews.

Rothbart answered the same question in her own way:

We are not trying to hold hands, sing kumbaya, and pretend that the conflict is easy to solve. Our youth grow up together, in and out of each  others’ homes. We engage in real conversation, deep educational complexity, and take action together to change our daily reality.

Both directors believe that peace is possible and that it can be achieved by changing the reality on the ground in Jerusalem.  They are doing this not only through dialogue but through action programs. With help from a major grant from USAID, they are training youth in activist skills, which will empower them to do meaningful projects in their communities, such as public speaking and other communications skills, to help them get their message out to a wider audience.

Do you have hope for the future? Are you optimistic? I asked them.

I am a religious Zionist Jew. For me, this work is avodat hashem, the work of God. What gives me hope are the many conversations I have with Israeli and Palestinian youth who want to make change.

Despite Trump’s statement on Jerusalem (in early December 2017),  we are meeting and carrying on our activities. Over 200 Palestinian and Israeli youth met in dialogue the day after his announcement. We do not let Trump or anti-normalization sentiments on the part of Americans, Palestinians or Israelis disrupt our work. Rather, I feel that Jerusalem is our city and those of us who live here are the people will decide its future. Working for Kids4Peace gives me hope for future generations.

Indeed, Kids4Peace has been growing and expanding significantly in recent years. In 2017, the organization added 200 new youth leaders and 75 adult advisors to their programs, reaching 4000 people through workshops and events around the world. They are building a movement of young leaders who are shaping the conversations in their communities about peaceful coexistence and are taking action for justice and peace, from Seattle to Jerusalem.

I congratulate these young leaders of Kids4Peace for their commitment, perseverance, optimism, and positive directions. They offer us some hope for the future, which we very much need at this time.

This is the 3rd post in a series entitled “Profiles in Peace”.  Over the years, in my lectures and panel discussions with visitors to Israel, or when I have been abroad, I have often been surprised to discover how little is known about the work for peace that is going on in Israel and Palestine. Therefore, I have decided to write about peacebuilders. Peacebuilders are those who bring other people together to learn about the possibilities and benefits of peaceful coexistence, as opposed to “peacemakers” who are politicians who engage in the political peace process, (which has virtually ceased in Israel and Palestine in recent years).