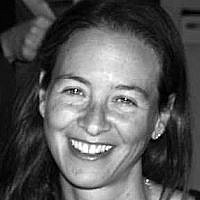 The Blogs
Jennie Starr
Apply for a Blog
Advertisement
Please note that the posts on The Blogs are contributed by third parties. The opinions, facts and any media content in them are presented solely by the authors, and neither The Times of Israel nor its partners assume any responsibility for them. Please contact us in case of abuse. In case of abuse,
Report this post.

I am an Israeli-American, raised in the US, but I didn’t learn to speak Hebrew until I was an adult.  Speaking Hebrew strengthened my connection to Israel, family, Israelis and even Jewish life. It helped me relate, made me more passionate about Israel’s vitality, and increased my sense of ownership in Israel’s future.  Since then, I’ve encouraged many parents to teach their children modern Hebrew and expose them to Israeli culture. Israelis who don’t speak enough Hebrew at home worry their kids are behind and they often see their 2nd and 3rd children responding only in English. Some Israelis, bypass Hebrew study entirely encouraging the study of different languages instead. If I had a nickel for every Israeli parent that told me they think Chinese is more important I’d be rich. Couples comprised of one Israeli and one American parent raise concerns about speaking to their American born child in Hebrew, believing it may harm their relationship if their child can’t understand them. On the contrary, if they speak Hebrew from birth consistently with their child they will have an intimate special language, deep connection to Israel and a bilingual child. The spouse will learn more Hebrew too. Americans can gain the same benefits from learning Hebrew. It’s possible that if Americans learn to speak more Hebrew we will understand each other better, be more united and support Israel in spectacular ways.

Most of my family lives in Israel, but growing up I viewed Israel as my Dad’s home not mine.  I didn’t understand my family during visits in Israel. They tried speaking in English, but they typically switched back to Hebrew rapidly during the most important conversations, the ones where they really connected, in Hebrew.  How does a Diaspora Jew with no other concrete personal connection to Israel feel; does he/she make a strong connection and feel at home?  From the PEW report, a Portrait of Jewish Americans we learned that “half of Jews (52%)… say they know the Hebrew alphabet. But far fewer, 13% of Jews overall, say they understand most or all of the words when they read Hebrew.”  Much like Jewish Americans, many Israeli-Americans raised in the US never learn to speak Hebrew. According to a 2013 report by the Israeli-American Council, children of Israelis living in the U.S. 10 years or more are far less likely to speak Hebrew.  But, if you raise children who speak and understand Hebrew, they may look, feel and engage with Israel and Israelis differently with more understanding and connection.

Hebrew and Israel Can and Should Feel Like Home and Family

I’m often asked if I think every Jew should be able to speak Hebrew proficiently, and I always respond that I know that’s not realistic.  But I do believe every Jew can and should understand and speak enough Hebrew that they feel comfortable and connected to Israel and Israelis when they hear it.  If they did, American Jews may also be inspired to strengthen their connection to Israel and make more Israeli and Jewish friends.  When they hear Hebrew spoken, whether in Starbucks, a market in Thailand, or on visits to Israel, Hebrew would be familiar enough that they wouldn’t hesitate to join the conversation and make a connection.  Hebrew should be one of their “native” languages; it should feel like home and family.

Am I Israeli or Israeli-American If I Don’t Speak Hebrew?

An estimated 200,000 to 1 million Israeli-Americans live in the U.S. today. The Israeli-American Council’s 2nd Annual conference October 17-19 in Washington D. C., will bring many Israeli-Americans together, and Americans as well, to discuss issues of identity, Israel connection, and bridging with Jewish communities. I believe Hebrew is an important piece of that puzzle for all of us. I raise this issue linking Israeli identity to Hebrew language skills, knowing it is sensitive, to inspire dialogue about the importance of Hebrew. The Reut Institute did a study of Israelis abroad in 2012, and concluded that “First generation Israelis view Hebrew as the most important component of childhood education – The ability to communicate, read, and write in Hebrew is seen as a guarantee that their children’s ‘Israeliness’ will be preserved.” Yet many families fail to teach their children Hebrew citing a lack of suitable educational options, cost, busy schedule and more. Israeli Government and Jewish Agency representatives have both defined “Israeli” for me as “one who speaks Hebrew.” But, for some Israelis living in the U.S. this definition is hard to swallow.  Years ago in the midst of a conversation in Hebrew with Israeli friends, one friend shared with the others his amazement that I could speak in Hebrew with them. “She’s an American, unbelievable” he said. This wasn’t about my Hebrew skills which have plenty of grammar mistakes. This was about Hebrew and identity. Why? Because later, when another of the friends defined an “Israeli” as“one who speaks Hebrew” this same friend grew visibly angry and strongly disagreed. The comment struck a nerve because he raised children in the U.S. that could not speak Hebrew and he was not prepared to concede their Israeli identity was lost with their Hebrew skills. For what it’s worth, when I learned to speak Hebrew, I finally felt comfortable identifying myself as an Israeli-American. Until then, I felt I didn’t own that part of my identity the same way.

One thing is certain, we have more options today than ever before to raise a child with Hebrew in their lives.  Starting in preschool, you can have Hebrew books delivered free to your home from Sifriyat Pijama b’America and free storytimes are offered nation-wide. Some lucky children get daily instruction for free at Hebrew Language Charter Schools in Los Angeles, San Diego, NYC, Washington D.C. and New Jersey. Weekly programs such as Keshet in New York, Tarbuton in San Diego and the Ami School in Los Angeles are available for elementary and middle school years. Machane Kachol Lavan treats children to summer camp in Hebrew in California and New York.  These programs and others are creating Jewish educational alternatives nationwide that develop Jewish and Israeli identity and strong Israel connections. Offered outside of religious institutions, they reach many seeking cultural rather than religious experiences and engage them in Jewish life.  Americans will tell you in droves they went to Hebrew school, but never learned Hebrew.  With estimates of up to 1 million Israelis living in the U.S., we have at least a generation if not two of Israeli-American children who may not speak Hebrew either.  I hope the growth in the availability of these Hebrew programs means Hebrew literacy will be a strong part of our toolkit for building Jewish identity in the U.S. leading to a next generation with deep Israel – U.S. connections.

Jennie Starr is the Founder & a Board of Director of the Tarbuton, Israeli Cultural Experiences. Jennie advocates for Hebrew Language Charter Schools, introduced Hebrew classes in Del Mar, Solana Beach and Poway public schools enrichment, and serves on the Del Mar District DELAC Board. The Tarbuton was recognized as a Slingshot Top innovative organization in 2012-2013 and 2014-2015. The Tarbuton is supported by the Leichtag Foundation and the Israeli-American Council.  Founded in 2006, the community programs focus on Modern Hebrew and Israeli culture to educate the next generation and build Israel connection for both Israelis and Americans of all ages.

About the Author
Jennie Starr is the Founder and CEO of the Tarbuton Israeli Cultural Experiences in San Diego, CA. Founded in 2006, the community programs are designed to use Modern Hebrew and Israeli culture as an essential link to Jewish Peoplehood itself for both Israelis and Americans. Jennie has 20 years of work experience in Law and Product Management. She has a BA from Northwestern, MA from the University of Illinois, and a JD from Washington University in St. Louis. She advocates for Hebrew Language Charter Schools, introduced Hebrew classes in area elementary public schools and serves on her District DELAC Board. Jennie has coached 8-15 yr olds in Girls on the Run and enjoys running Marathons and Half Marathons as time permits. She lives in San Diego, CA with her husband and two children.
Comments