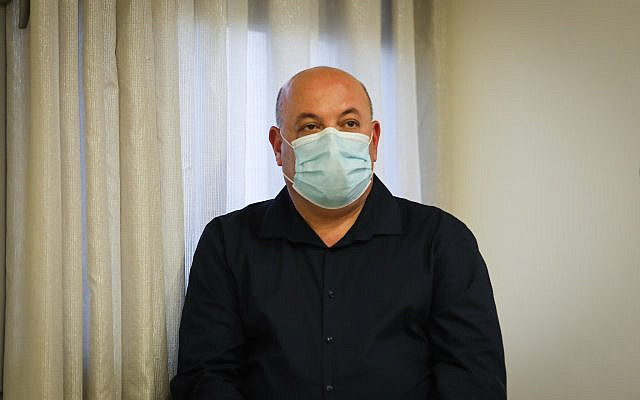 Prof. Itamar Grotto at press conference about the coronavirus COVID-19, at the Health Ministry in Jerusalem on May 31, 2020. (Flash90)

Israel’s press plays a critical role in our democracy as a relentless critic of those who walk the corridors of power. And yet, when they go after a civil servant, the press has a special responsibility to be meticulous in getting the facts right. Civil servants are not free agents who can respond openly, offer their side of the story – or even freely provide relevant documentation. That’s why the recent brouhaha over Professor Itamar Grotto’s granting a ministry of health exemption from the usual quarantine requirements to billionaire Teddy Sagi represents a low point for Israeli media. We now know that there was nothing nefarious about the process: Grotto was only doing his job, as always, conscientiously. As a local Israeli hero, he deserves much better.

Most Israelis only encountered Professor Grotto, the ministry’s Deputy Director for public health, due to his central role in designing the uncompromising, national policy response to the Covid-19 crisis. For those who missed him in the steady stream of Corona-related press conferences, the gruff impersonation in recent episodes of the satirical TV show “Eretz Nehederet” made the introduction. The television writers’ caricature was surely hilarious, but did little to show Grotto’s underlying decency and lighter side.

For those of us involved in the field of environmental health, however, for years Itamar Grotto has been a rare example of a top-level expert who has had the stamina to stay in the public sector and make a difference. He did not blink in characterizing the health risks associated with mining phosphates in Sde Barir near Arad. For years Grotto offered straight talk and transparency regarding the health of Haifa Bay citizens in light of their exposure to air pollution; He set up a committee to evaluate racism in the health system. He was elected to the executive board of the World Health Organization. The list goes on and on.

Obviously, you don’t make hard decisions and show leadership without making enemies. So, someone in the ministry apparently leaked the Teddy Sagi special request and successfully misled the channel 12 reporters about the entire matter.

The “journalists,” of course, were eager not to miss the scoop and didn’t bother to ask for details or for Grotto’s side of the story. And so, perhaps Israel’s most eminent public health professional was portrayed as a corrupt, hypocritical sycophant, who talked tough to the public while selectively offering leniency to the wealthy. That’s how the story was spun in all the newspapers, television stations and social media. Even leading journalists, like Yedioth Ahronoth’s Sima Kadmon devoted entire columns, disparaging Professor Grotto integrity and duplicitous practices.

The only problem is — they got it wrong. It took a couple of days, but the facts are now emerging. They paint an entirely different picture:

In short, Grotto’s decision was entirely consistent with the Ministry of Health’s policy and desire to only interfere with individual freedom when it endangers public health.

In the meanwhile, a devoted, talented Israeli scientist and physician, who has dedicated his life to serving the public has been shamed – for something he did not do.

Anyone who takes the time to learn the facts now knows that Professor Grotto violated no rules, received no kickback and only applied the Ministry’s rules when asked. Nonetheless, the stain on his reputation will be hard to remove. That’s simply unfair.

Israel is very lucky to have a few, outstanding experts who are willing to endure the relatively low salaries, the ever-changing, obtuse political oversight, the constraints on communication and the endless litany of indignities — which civil services imposes. Suffering a baseless smear at the hands of Israel’s press should not be part of this list. It would be well if Professor Itamar Grotto received an apology from the shoddy journalists who so besmirched his name. But I think that the only one he will receive may be from me – on behalf of all of us who want Israel to have an excellent health care system and who care about truth.

Yes, a free press has a price. But it is also a pity that someone, who has contributed so much to the well-being and health of this country, has had to pay dearly for it. We can only hope that in the future, Israel’s journalists might do their jobs more professionally. And that Professor Grotto’s integrity, internal compass and dedication to improving Israel’s public health will see him through this unfortunate episode.